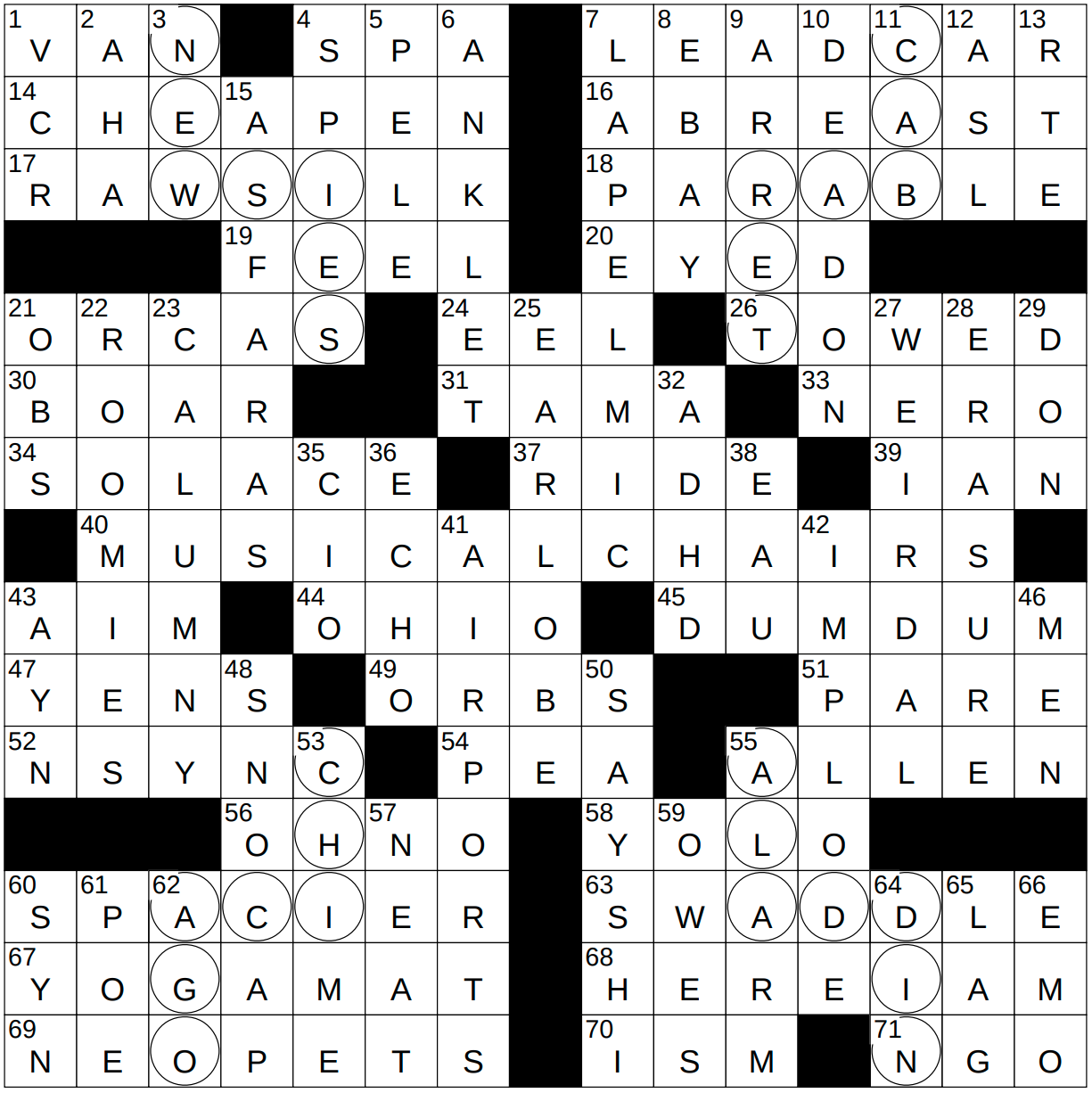 Today’s grid includes four sets of circled letters in the shape of CHAIRS. Those letters spell out the names of MUSICALS:

33 Emperor whose mother was Agrippina the Younger : NERO

Ian McEwan is an English novelist with a track record of writing well-received novels. His most famous work of recent years I would say is “Atonement” which has benefited from the success of a fabulous movie adaptation released in 2007.

Skee-Ball is the arcade game in which you roll balls up a ramp trying to “bounce” it into rings for varying numbers of points. The game was first introduced in Philadelphia, in 1909.

Miami University was founded in 1809 in Oxford, Ohio. The school is named for its location in the Miami Valley in the southwest of the state.

Wasabi peas are peas that have been fried and then coated with wasabi powder mixed with sugar, salt and oil. They make for a crunchy snack, a favorite of mine …

1 Device associated with the advice “Be kind, rewind” : VCR

In Latin, the word for midwife is “obstetrix”. “Obstetrix” translates more literally as “one who stands opposite” i.e. the one opposite the woman giving birth. The Latin term gives rise to our modern word “obstetrics” used for the branch of medical science concerned with childbirth.

A calumny is a false statement designed to sully someone’s or something’s reputation. Sadly, calumnies are pretty common around election time …

Whether an earlobe is free or attached is an example of genetic dominance at play. The dominant gene calls for free earlobes, and the recessive for attached. Among cultural groups, the Japanese and Chinese have a relatively high incidence of attached earlobes, running at about 65% of the population.

Boyz II Men are an R&B vocal trio from Philadelphia who started out in 1988. The original BOYZ II Men lineup included a fourth member, Michael McCary. McCary left the group in 2003 due to chronic back pain. The Boyz II Men 1992 hit “End of the Road” stayed at number-one in the Billboard charts for an amazing thirteen weeks, shattering the 11-week record that had been held by Elvis Presley’s “Hound Dog” since 1956.

We use the spelling “whiskey” for American and Irish versions of the drink, and “whisky” for scotch, the Scottish version.