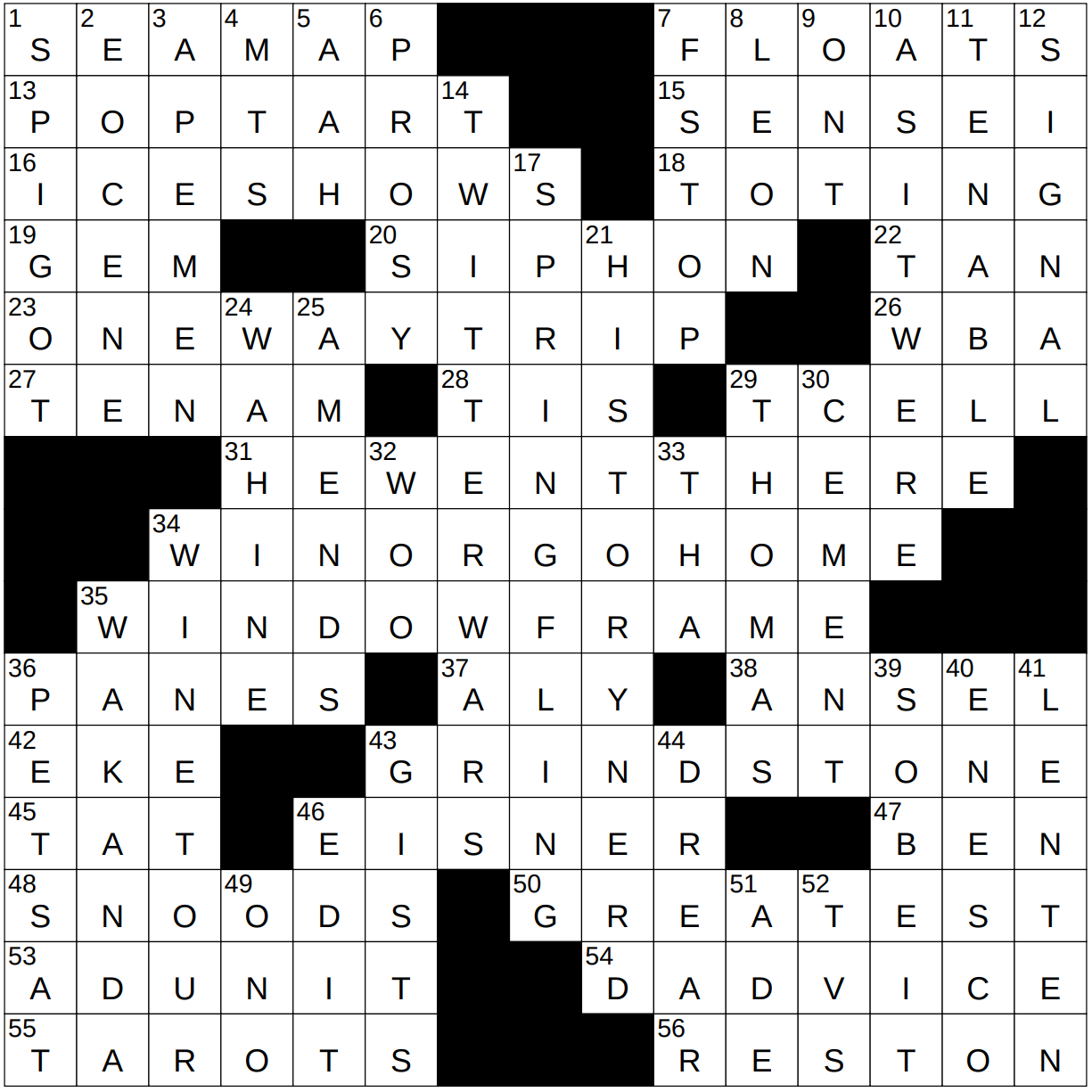 Constructed by: Aaron Ullman
Edited by: Will Shortz

Pop-Tart is the most successful single brand for the Kellogg company, as millions of the sugary treats are sold every year. The US Military bought quite a few in 2001, and dropped 2.4 million Pop-Tarts into Afghanistan during the invasion after 9/11.

A paragon is a model of excellence, a peerless example. Ultimately the term derives from the Greek “para-” meaning “on the side” and “akone” meaning “whetstone”. This derivation comes from the ancient practice of using a touchstone to test gold for its level of purity by drawing a line on the stone with the gold and comparing the resulting mark with samples of known purity.

26 Initialism that might have a ring to it? : WBA

Michael Eisner took over as CEO of the Walt Disney Company in 1984. Eisner has been attributed with turning Disney around, as the company was floundering really since 1966 when Walt Disney died. Eisner had a good run, but ran afoul of Walt Disney’s nephew Roy Disney who led a boardroom revolt that resulted in Eisner’s resignation in 2005.

A snood is a net or a bag worn over the hair. “Snood” comes from the Old English word “snod” meaning “ribbon for the hair”.

54 Fatherly tips, to use a portmanteau coinage : DADVICE

“Dadvice” is “Dad” “advice”. According to my kids, I give way too much dadvice …

1 Turn-on for a bartender? : SPIGOT

Something that is “prosy” resembles prose. Also, “prosy” can be used to mean “lacking impact or dry”, prosaic in fact.

Something tenable can be maintained or defended. The term “tenable” comes from the Latin verb “tenere” meaning “to hold, keep”.

“Wahine” is a word meaning “woman”, in both Hawaiian and Maori.

29 Poet who wrote “A Child’s Christmas in Wales” : THOMAS

To court someone is to woo them, to offer homage. One might do something similar at court, hence the use of the term.

The Napa Valley Wine Train is an excursion train that runs between Napa and St. Helena, California along the original Napa Valley Railroad built in 1864. The line was built back then by pioneer Samuel Brannan to bring tourists from the San Francisco Bay Area to the resort town of Calistoga, which Brannan founded. Today’s Wine Train offers a 3-hour round trip, with a full dining car experience.