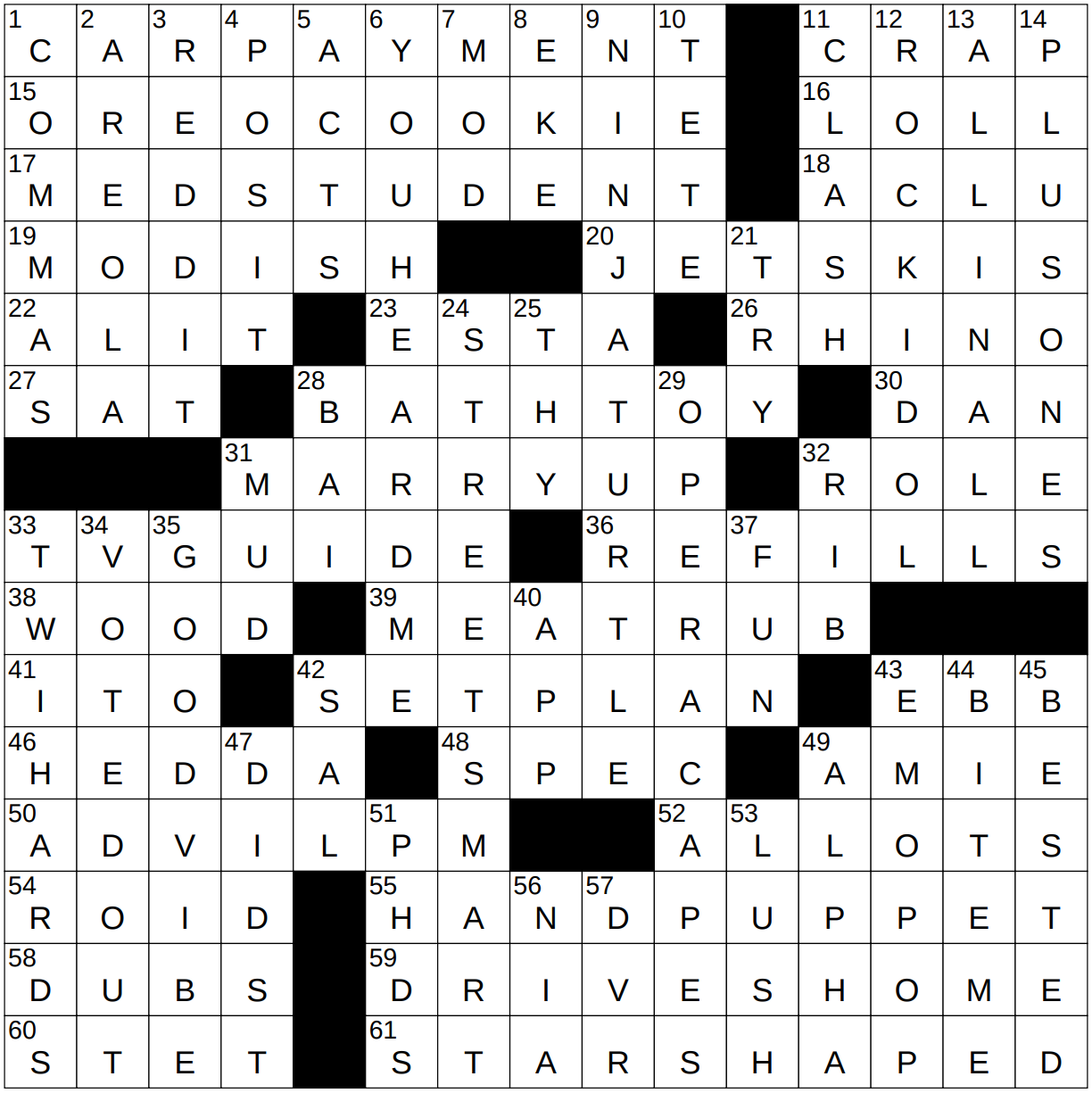 Constructed by: Ryan McCarty & Yacob Yonas
Edited by: Will Shortz

17 Che Guevara, when he wrote “The Motorcycle Diaries” : MED STUDENT

Ernesto “Che” Guevara was born in Argentina, and in 1948 he started to study medicine at the University of Buenos Aires. While at school he satisfied his need to “see the world” by taking two long journeys around South America, the story of which are told in Guevara’s memoir later published as “The Motorcycle Diaries”. While traveling, Guevara was moved by the plight of the people he saw and their working conditions and what he viewed as capitalistic exploitation. In Mexico City he met brothers Raul and Fidel Castro and was persuaded to join their cause, the overthrow of the US-backed government in Cuba. He rose to second-in-command among the Cuban insurgents, and when Castro came to power Guevara was influential in repelling the Bay of Pigs Invasion and bringing Soviet nuclear missiles to the island. Guevara left Cuba in 1965 to continue his work as a revolutionary. He was captured by Bolivian forces in 1967, and was executed. Fidel Castro led the public mourning of Guevara’s death, and soon the revolutionary was an icon for many left-wing movements around the world.

18 Private org. involved in the most Supreme Court cases : ACLU

“Jet Ski” is actually a brand name owned by Kawasaki Heavy Industries of Japan. The generic term, not often used, is “personal watercraft”. Most people use the term “jet ski” generically, although “WaveRunner” is also popular. But that’s another brand name, one owned by Yamaha.

31 Climb the social ladder, in a way : MARRY UP

That’s certainly what I did …

The first national “TV Guide” was issued in 1953. The cover of that first issue featured a photo of newborn Desi Arnaz, Jr., son of Lucille Ball.

“Hedda Gabler” is a play by the great Norwegian playwright Henrik Ibsen that was first published in 1890. Considered one of the greatest theater roles, the title character of Hedda Gabler is sometimes referred to as the female Hamlet.

“Jules et Jim” is a French film directed by François Truffaut that was released in 1962. The movie tells the story of two friends, Jules and Jim, who get involved in a complex love triangle with a woman named Catherine.

1 They can lead to long sentences : COMMAS

Bai Brands is a beverage company that specializes in low-cal soft drinks that include antioxidants.

Sal Minella is a Muppet character. He is the bodyguard for fellow muppet Johnny Fiama who is modeled after Frank Sinatra.

51 Results of some successful defenses : PHDS