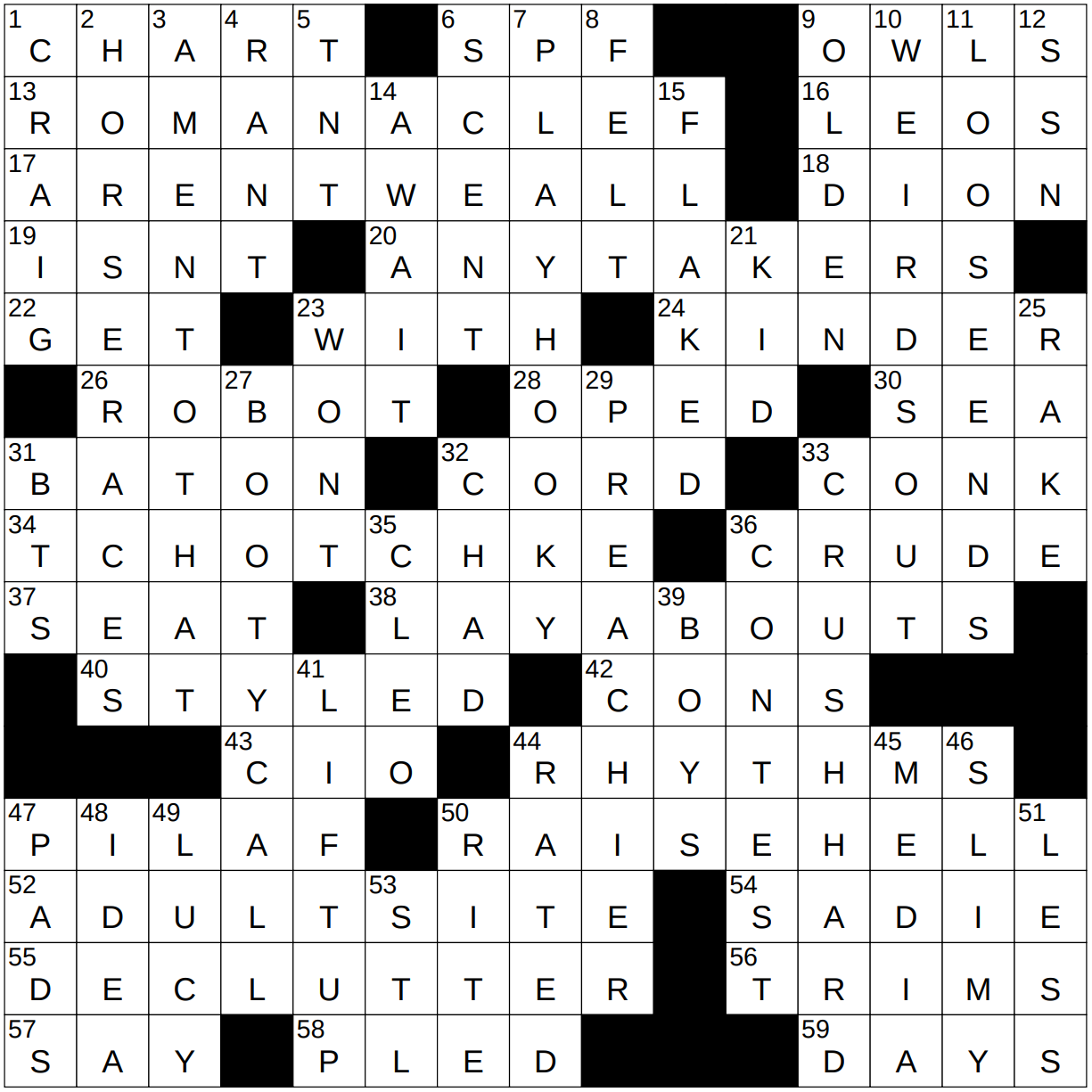 9 Creatures with asymmetrical ears for accuracy in hunting : OWLS

Vienna is the capital of Austria. The city has a long musical tradition and was home to Franz Schubert, Johann Strauss (I and II), Josef Haydn, Wolfgang Amadeus Mozart, Ludwig van Beethoven, Franz Liszt, Johannes Brahms and Gustav Mahler. As such, Vienna is sometimes called the “City of Music”. It is also called the “City of Dreams” as it was home to the psychoanalyst Sigmund Freud.

26 Costume that might start with a cardboard box : ROBOT

Karel Čapek was a Czech writer noted for his works of science fiction. Čapek’s 1921 play “R.U.R.” is remembered in part for introducing the world to the word “robot”. The words “automaton” and “android” were already in use, but Capek gave us “robot” from the original Czech “robota” meaning “forced labor”. The acronym “R.U.R.”, in the context of the play, stands for “Rossum’s Universal Robots”.

“Tchotchke” is a slang term meaning “cheap, showy trinket”. It came into English from a Slavic source via Yiddish.

Craigslist (usually written as “craigslist”) is an online network of communities that features classified advertisements organized geographically. Craigslist was started by Craig Newmark in 1995, originally as an email distribution list for his friends who lived and worked in the San Francisco Bay Area.

“Claws” is a comedy-drama show that first aired in 2017. It’s all about a group of five manicurists who branch out into organized crime.

7 One way to avoid a lecture : PLAY HOOKY

Apparently the term “hooky” comes from “hoekje”, the Dutch name for the game hide-and-seek. To play hooky is to shirk one’s responsibility, as in a schoolkid taking a day off without permission.

Form W-2 is provided by US employers to their employees by January 31 each year. The form reports wages paid to the employees, as well as taxes withheld.

32 Country whose official languages are French and Arabic : CHAD

Cleo Laine is a jazz singer from England who is noted for her remarkable range of nearly four octaves. Laine is the only female performer to have received Grammy nominations in each of the classical, jazz and popular music categories. My favorite of her recordings is “He Was Beautiful”, which is also known as “Cavatina” and is a version of the theme from the film “The Deer Hunter”.

The “To All the Boys” films are a series of teenage romance dramas based on a trilogy of novels of the same name by Jenny Han. The series title is a reference to five letters written by a young lady to boys that she had crushes on. She never plans to mail the letters, but they get sent out anyway.

The word “smarm” describes insincere flattery. The term comes from a colloquial word “smalm” that was used in the mid-19th century to mean “smear the hair with some sort of styling product”.