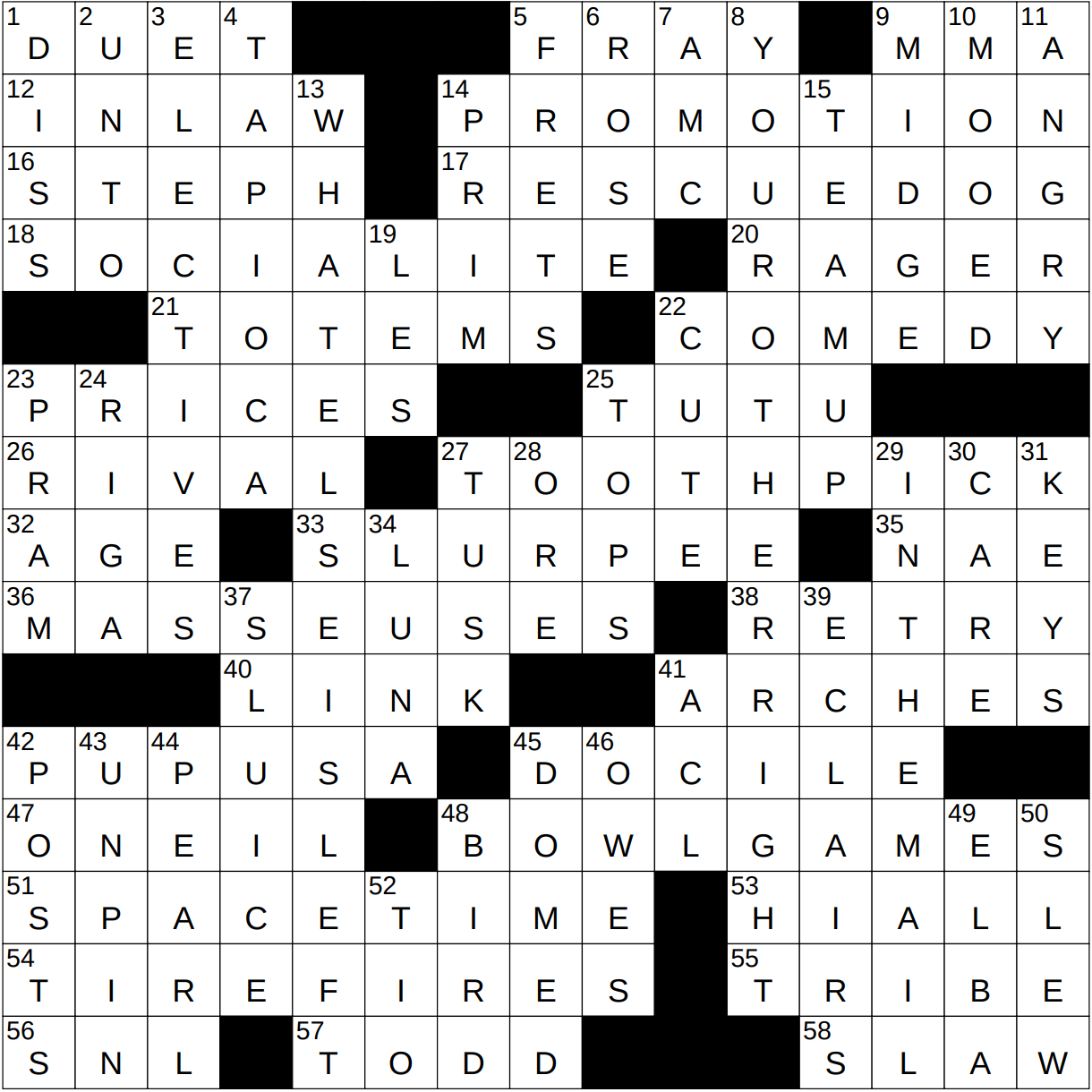 Stephen “Steph” Curry is a professional basketball player who was selected by the Golden State Warriors in the 2009 draft. Steph’s father is former NBA player Dell Curry, and his younger brother is current player Seth Curry. Steph Curry is noted for accuracy in shooting. Curry set the record for three-pointers made in a regular season in 2013, broke that record in 2015, and broke it yet again in 2016. Then, in 2021, he broke the record for career three-pointers.

One might measure the rescue dog while it is in the dog pound.

When one provides a quote prior to a sale, one includes the price.

33 Drink with an onomatopoeic name : SLURPEE

56 Show that opens with an iconic crane shot, in brief : SNL

“Lean on Me” is a film released in 1989 based on the true story of a high school principal in Paterson, New Jersey. Morgan Freeman plays the hero of the piece who works to improve test scores so that his inner city school isn’t taken over by the state.

The cassava plant is a woody shrub native to South America grown largely for its carbohydrate-rich tubers. In fact, cassava is the third largest food source of carbohydrates (for humans) in the world. Ordinarily, that carbohydrate is extracted from the plant and dried as flour, and is known as tapioca.

7 Co. that patented the combination cup holder and armrest : AMC

When Nash-Kelvinator Corporation and Hudson Motor Car Company came together in 1954, it was the largest US corporate merger to date. The new company was called American Motors Corporation (AMC), and was of a size that could compete with the “Big Three” automakers. A few months after the merger, George W. Romney was given the top job at AMC. George was the father of presidential candidate Mitt Romney.

“Midge” is a familiar term used for many different kinds of small flies.

“Les Amants” (“The Lovers”) is a 1958 French movie directed by Louis Malle when he was just 25 years old. The film was a great success in France but when it was first shown here in the US, a theater manager was actually convicted of distributing obscene material.

Another word used in Britain and Ireland that’s rarely used over here is “pram”, which in my day was the most common term for what is called a baby carriage in the US. “Pram” is short for “perambulator”.

Corsica (“La Corse” in French) is a large island in the Mediterranean Sea belonging to France. Napoléon Bonaparte was born on Corsica, in the town of Ajaccio.

In Spanish, a “tio” (uncle) is a “miembro de la familia” (member of the family).

“Encanto” is a 2021 animated Disney film. It is about a Colombian family, named the Madrigals, who have magical powers that provide assistance to the people in their community (Encanto).