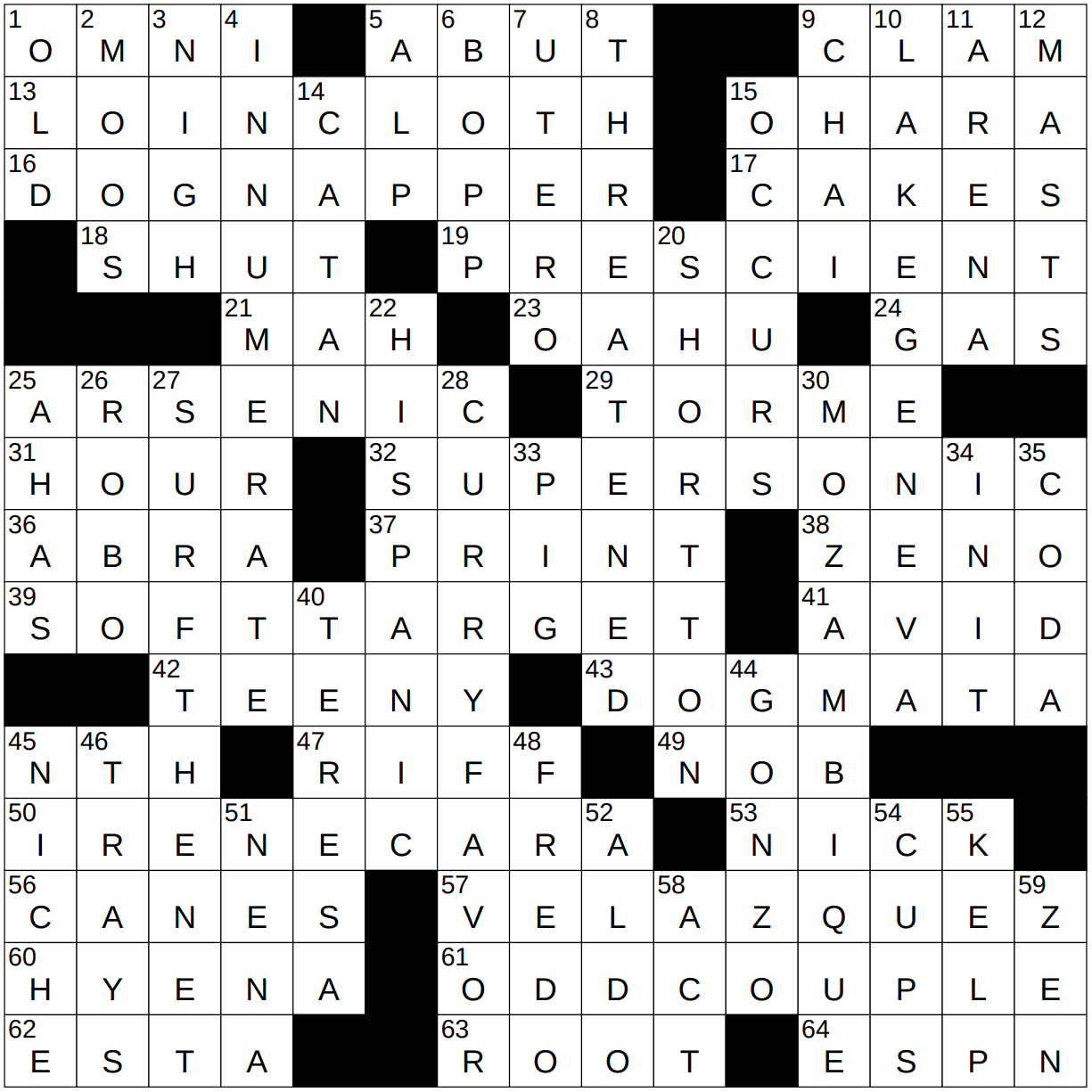 13 A sumo wrestler’s is called a mawashi : LOINCLOTH

A mawashi is a belt that sumo wrestlers wear when training and fighting. It’s actually a strip of silk, about two feet wide and 30 feet long, that is wrapped around the body and tied in a knot at the back. It weighs anywhere from 8-11 pounds.

23 U.S. locale that, when said quickly, sounds like a cheer : OAHU

The island of Oahu was conquered in 1783 by Kahekili II, the King of Maui. Kahekili then placed his son Kalanikupule on Oahu’s throne.

25 As seen in chemistry class? : ARSENIC

Arsenic is element #33 in the periodic table, and has the chemical symbol “As”. Because of arsenic’s toxicity, it was very commonly used in pesticides. These compounds are getting banned over time, but it seems there is a long way to go. Arsenic in aquifers continues to be a problem around the world, including here in the US. China has introduced limits to the amounts of arsenic permitted in food as well as water, mainly as the Chinese staple of rice is particularly effective at accumulating arsenic from groundwater.

Mel Tormé was a jazz singer with a quality of voice that earned him the nickname “The Velvet Fog”. Tormé also wrote a few books, and did a lot of acting. He was the co-author of the Christmas classic known as “The Christmas Song”, which starts out with the line “Chestnuts roasting on an open fire …”

In the “Pokémon” universe, the species known as “Abra” can evolve into “Kadabra”, and then into “Alakazam”.

57 Manet called him “the painter of painters” : VELAZQUEZ

Diego Velázquez was a Spanish painter during the Baroque period. He was a member of the court of King Philip IV in the first half of the 17th century, and as such was commissioned to paint many portraits and scenes of historical importance.

60 Cousin of an aardwolf : HYENA

An aardwolf is a small hyena native to Eastern and Southern Africa. Aardwolf is an Afrikaans name meaning “earth wolf”.

Many Alpine mountains have German names that end with “-horn”. Examples are Weisshorn and Matterhorn. “Horn” is German for “peak”.

6 Astronomer Thomas for whom a comet is named : BOPP

14 Board game set on an island : CATAN

The Settlers of Catan (now just “Catan”) is a board game that was introduced in 1995, in Germany as “Die Siedler von Catan”. The game is very popular in the US and was called “the board game of our time” by the “Washington Post”. My son plays it a lot, and as a lover of board games, I am going to have to check it out …

22 Like only one member of the Supreme Court in its history (Sonia Sotomayor) : HISPANIC

Political calls, including robocalls, are exempt from regulation by the Federal Trade Commission (FTC), so we can’t stop them by putting our phone numbers on the “Do Not Call Registry”.

To curry is to seek, at least when it is used in the phrase “to curry favor”.

30 Only one-word country that contains all five vowels : MOZAMBIQUE

Mozambique is a nation in the southwest of Africa on the Indian Ocean. It was a Portuguese colony for centuries, gaining independence in 1975. The country was named for the Island of Mozambique, which lies a few miles off the coast.

Teresa Weatherspoon is a WNBA coach and former player. Her playing career included 8 years with teams in Italy, France and Russia.