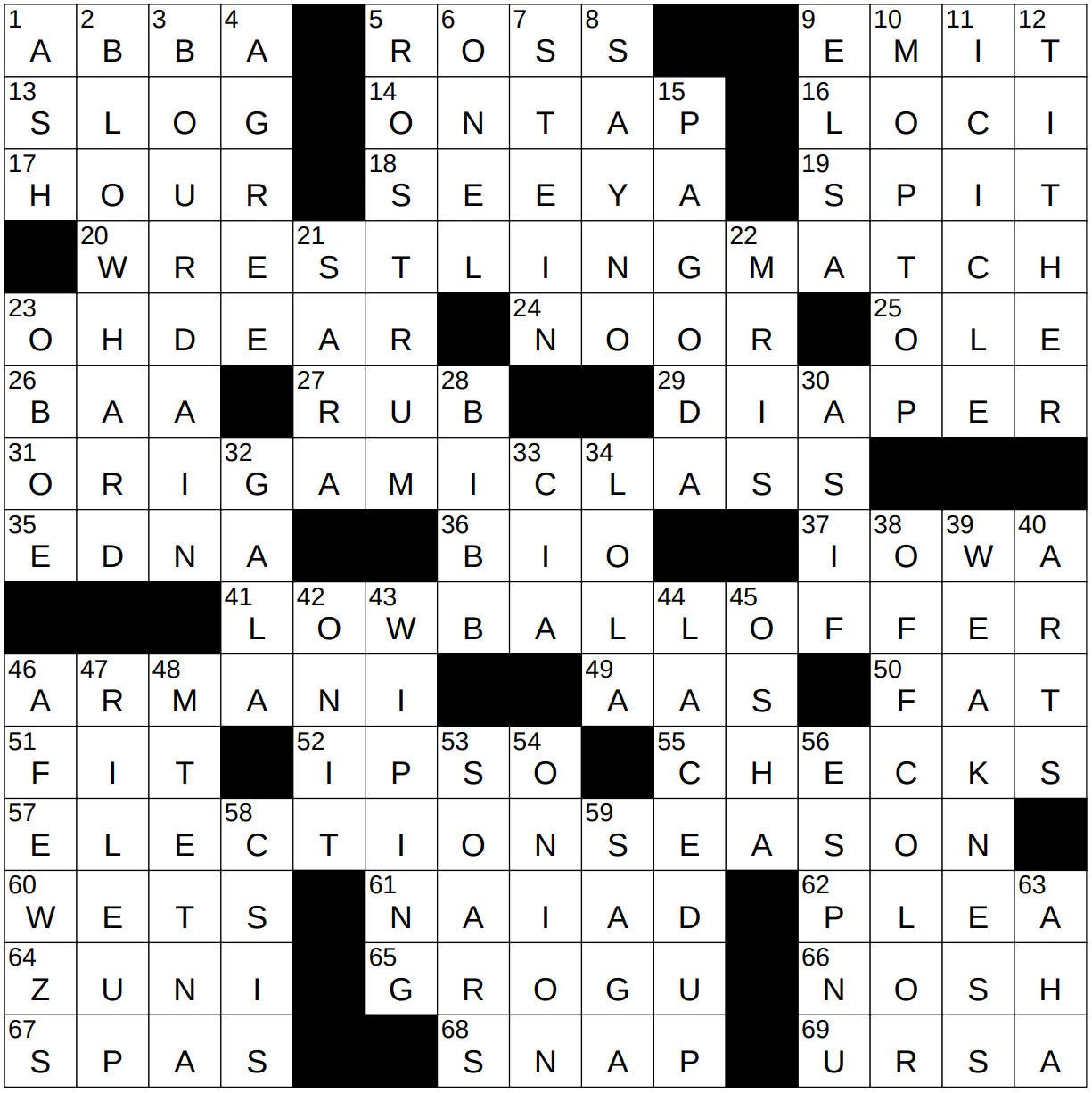 Constructed by: Jonathan M. Kaye
Edited by: Will Shortz

Today’s Theme (according to Bill): The Gambler

Themed clues are successive lines from the Kenny Rogers hit “The Gambler”:

1 “The Winner Takes It All” group : ABBA

“The Winner Takes It All” is a 1980 song recorded by ABBA. The song was co-written by Björn Ulvaeus, and his wife Agnetha Fältskog sang lead vocals. The song is all about the experience of divorce, and Ulvaeus and Fältskog were going through a divorce at the time of the recording. However, the couple have denied that the song is about their own marriage, and Fältskog has repeatedly stated that “The Winner Takes It All” is her favorite song.

“The Gambler” is a song written by Don Schlitz in 1976, and most famously recorded by Kenny Rogers in 1978. Backing vocals on the recording were provided by the Jordanaires, a vocal quartet who most famously accompanied Elvis Presley in most of his recordings from the 1950s to the 1970s.

Queen Noor is the widow of King Hussein of Jordan. She was born Lisa Halaby in Washington, D.C., the daughter of Najeeb Halaby. Her father was appointed by President Kennedy as the head of the Federal Aviation Administration, and later became the CEO of Pan Am. Lisa Halaby met King Hussein in 1977, while working on the design of Jordan’s Queen Alia Airport. The airport was named after King Hussein’s third wife who had been killed that year in a helicopter crash. Halaby and the King were married the next year, in 1978.

“Incredibles 2” is a 2018 movie that is a sequel to 2004’s “The Incredibles”. Both films were written and directed by Brad Bird. Bird was also a cast member for “Incredibles 2” as he voiced Edna Mode, a fashion designer for superheroes.

46 Famed designer whose career was boosted by “American Gigolo” : ARMANI

The Zuni are a Pueblo people. They live on the Zuni River in western New Mexico, a tributary of the Little Colorado River.

68 Exclamation after a witty comeback : SNAP!

Scott Turow is an author and lawyer from Chicago. Turow has had several bestselling novels including “Presumed Innocent”, “The Burden of Proof” and “Reversible Errors”, all three of which were made into films. He also wrote the autobiographical book “One L: The Turbulent True Story of a First Year at Harvard Law School”.

7 Gertrude who wrote “We are always the same age inside” : STEIN

12 One who gives one-tenth : TITHER

Actress Sara Gilbert grew up playing Darlene on the sitcom “Roseanne” from 1988 to 1997. Today Gilbert appears fairly often on another hit sitcom, namely “The Big Bang Theory”. You can also see her on the daytime talk show called “The Talk”, a show that she herself created. And, she made a comeback as Darlene in 2018 in the “Roseanne” reboot(s).

“Risqué” is a French word, the past participle of the verb meaning “to risk”. So in English we use “risqué” to mean “racy”, but in French it means “risky”.

In the world of radiotelephony, “wilco” is short for “I understand and will comply”.

45 Org. with thousands of inspectors : OSHA

The Metropolitan City of Catania (“Province of Catania” prior to 2015) is not only home to the city of Catania, but is also home to Mount Etna, Europe’s largest volcano. It is the second largest city on the island of Sicily (after Palermo), and has a long and rich cultural history. Today, Catania is known as a center for technology industries, earning it the nickname “European Silicon Valley”.