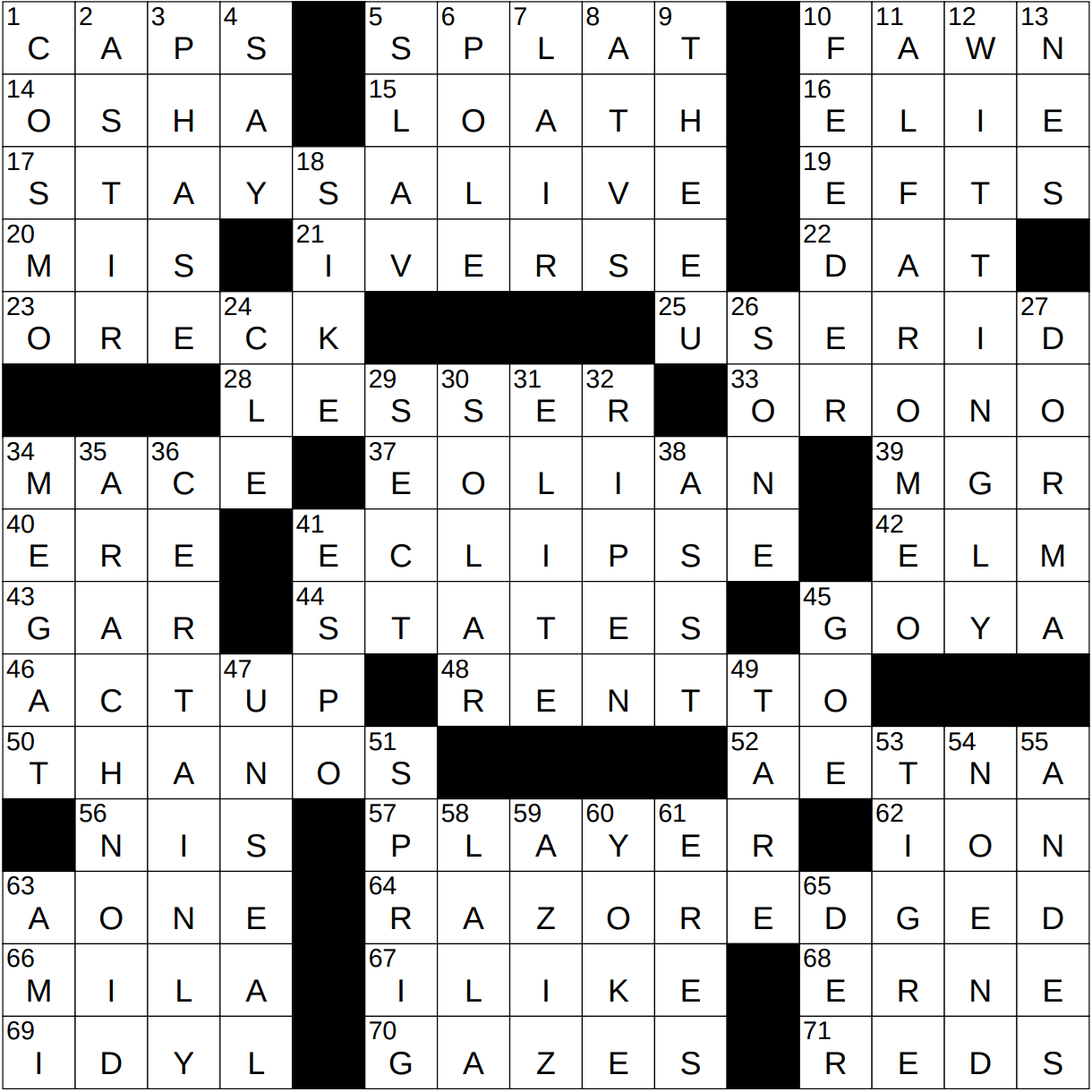 Constructed by: Max Lauring
Edited by: Will Shortz

We have four SOLAR ECLIPSES in today’s grid, with “SUN” hiding behind four black squares:

The verb “to fawn” has a different etymology to that of the noun “fawn”. The Old English “faegnian” meant “to rejoice, be glad”. In particular, the Old English verb applied to a dog wagging its tail. From there, “to fawn” came to mean “to court favor, to grovel”.

“The Hunger Games” is a 2008 novel by Suzanne Collins, and the first in a series of titles that also includes “Catching Fire” (2009) and “Mockingjay” (2010). “The Hunger Games” was adapted into a very successful movie released in 2012, with the sequels following soon after. Amazon.com reports more sales of “The Hunger Games” series books than even the “Harry Potter” series.

The original bards were storytellers, poets and composers of music in medieval Britain and Ireland, with the term coming from the Old Celtic word “bardos” that described a poet or singer. I guess the most famous bard was William Shakespeare, the Bard of Avon.

Mexico is a federal republic, and like the US is a collection of states and one federal district. The US has 50 states and the District of Columbia, whereas Mexico has 31 states and Mexico City. Our southern neighbor’s official name is the United Mexican States.

Haywire is wire used to bind bales of hay. Haywire is very springy, and coils of the wire are difficult to keep under control. That characteristic gives us the informal meaning of “haywire”, namely “erratic, crazy”.

50 One of the Eternals, in Marvel comics : THANOS

Thanos is a supervillain in the Marvel Comics universe. He was portrayed by Damion Poitier in the 2012 movie “The Avengers”, and by Josh Brolin in several subsequent movies including 2014’s “Guardians of the Galaxy”.

56 Followers of the largest denomination of Islam : SUNNIS

Like so many famous cocktails, the actual origins of the cosmopolitan are disputed. It is a very nice drink, in my humble opinion. One of the standard recipes is 4 parts citrus vodka, 1.5 parts Cointreau, 1.5 parts lime juice and 3 parts cranberry juice.

5 Ukrainian, for one : SLAV

6 Neighbor of a Ukrainian : POLE

“Nessun dorma” has to be the tenor aria that tugs at the heartstrings the most. It is taken from the last act of Puccini’s opera “Turandot”, and translates as “None shall sleep”. Back in my part of the world, “Nessun dorma” became a hit in the popular music charts, with a version by Pavarotti being used as the theme song to the 1990 FIFA World Cup in Italy. No other classical recording has ever done better in the charts.

In the world of acoustics, the sone was introduced in 1936 as a unit of perceived loudness.

32 What avocados don’t do until they’re picked : RIPEN

Arachnids are creatures with eight jointed legs. The name of the class Arachnida comes from the Greek “aráchnē” meaning “spider”.

Phil “Espo” Esposito is a former professional hockey player who played for the Chicago Blackhawks, Boston Bruins and New York Rangers. Espo scored 126 points in the 1969 season, hence becoming the first NHL player to score 100 points in a season.

The Boston Bruins professional ice hockey team goes way back, and has been in existence since 1924. The National Hockey League back then was a Canadian-only league, but was expanded to include the US in 1923. The Bruins were the first US-team in the expanded league.

Aziz Ansari is an actor and comedian from Columbia, South Carolina who is best known for playing Tom Haverford on the sitcom “Parks and Recreation”. He also stars in the Netflix comedy-drama series “Master of None”.