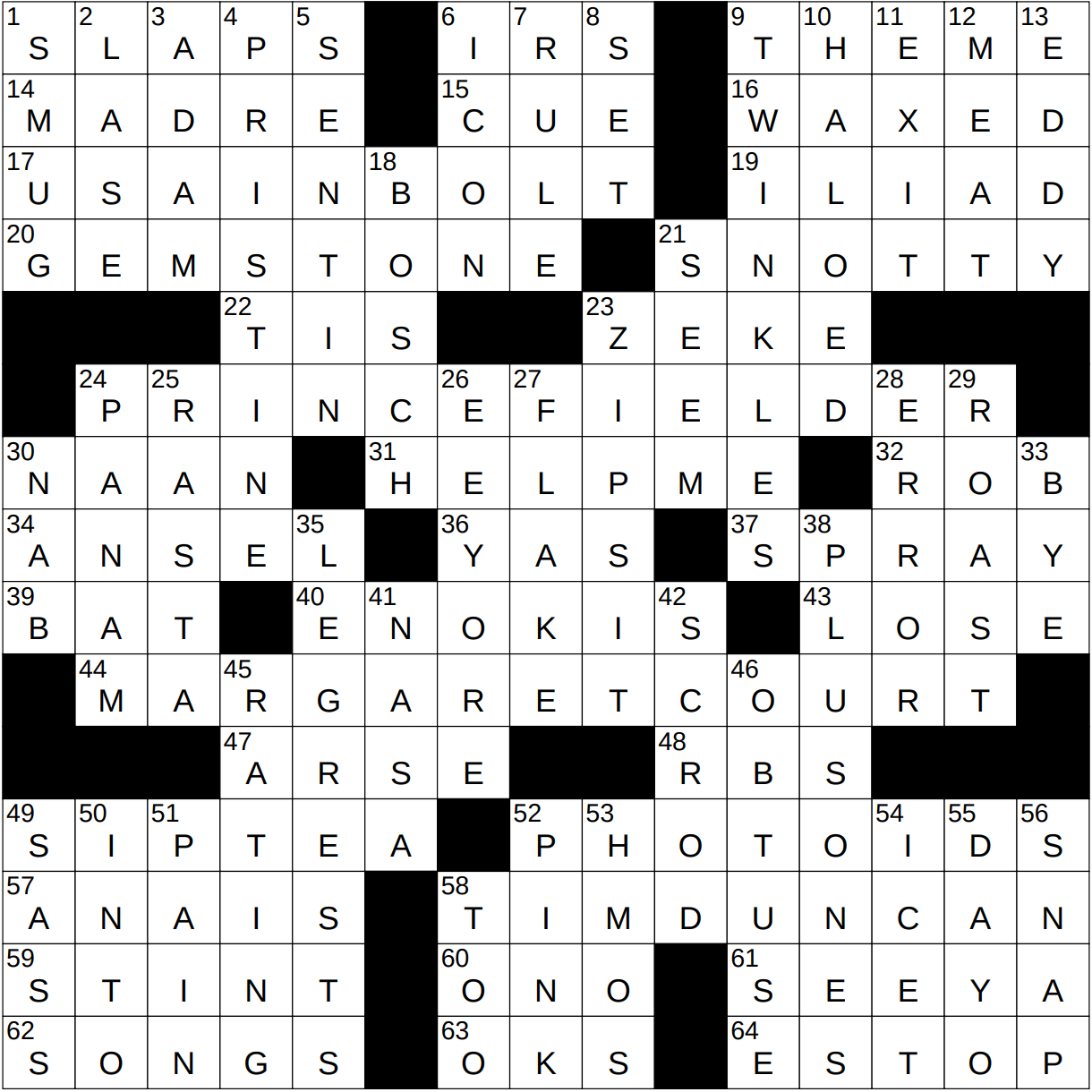 6 Div. of the Treasury Department : IRS

9 “Murder Mystery” or “Roaring ‘Twenties,” for a party : THEME

Pedro Almodóvar is a very successful Spanish film director, born in a small town in the region of La Mancha (made famous by Don Quixote). I’m afraid I don’t recognize any of Almodovar’s films.

Ilion (or in Latin “Ileum”), was the ancient name for the city of Troy. It’s this name for Troy that gives rise to the title of Homer’s epic poem “Iliad”.

Most modern poetry uses the rhythm (metrical line) known as iambic pentameter. The standard rhythm of classical Greek and Latin poetry is hexameter.

23 The Cowardly Lion, back in Kansas : ZEKE

Ansel Elgort is a relatively young actor, and someone who has had a remarkable string of successful roles. He played Tommy Ross in 2013’s “Carrie”, Caleb Prior in “The Divergent Series” movies, Augustus Waters in 2014’s “The Fault in Our Stars”, and the title character in 2017’s “Baby Driver”.

Tim Duncan is a professional basketball player from La Croix in the US Virgin Islands. Duncan was a natural swimmer, with his eyes on the 1992 Olympic Games. He was forced to turn his attention to basketball when Hurricane Hugo destroyed St. Croix’s only Olympic-sized pool in 1989.

The Plastic Ono Band was a so-called “super-group”, brought together by John Lennon and Yoko Ono in 1969. Members of the group included John and Yoko, Ringo Starr, George Harrison, Eric Clapton and Keith Moon.

The term “estop” means to block or stop by using some legal device. “Estop” comes from Old French, in which “estopper” means “to stop up” or “to impede”.

3 Apple consumer with an unhappy story to tell? : ADAM

Something described as pristine has its original purity, is uncorrupted.

18 Painter of “The Garden of Earthly Delights” : BOSCH

24 Bygone airline with a logo nicknamed the “Blue Meatball” : PAN AM

26 Children’s character who says “It’s not much of a tail, but I’m sort of attached to it” : EEYORE

41 Org. behind the Artemis program : NASA

NASA’s Artemis program has the goal of landing the first woman and the next man on the Moon by 2024. Artemis is viewed as a step along the road to sending humans to Mars in the 2030s.

52 Pop star whose name is stylized with an exclamation point in place of its second letter : PINK

“O.G. Original Gangster” is a 1991 song by rap artist Ice-T. Anyone interested in the exploits of Ice-T might want to listen to this one, as it deals with his life before he started rapping.

“Day-O (The Banana Boat Song)” is a traditional folk song from Jamaica. It is sung from the standpoint of dock workers unloading boats on the night shift, so daylight has come, and they want to go home. The most famous version of “Day-O” was recorded by Harry Belafonte, in 1956.