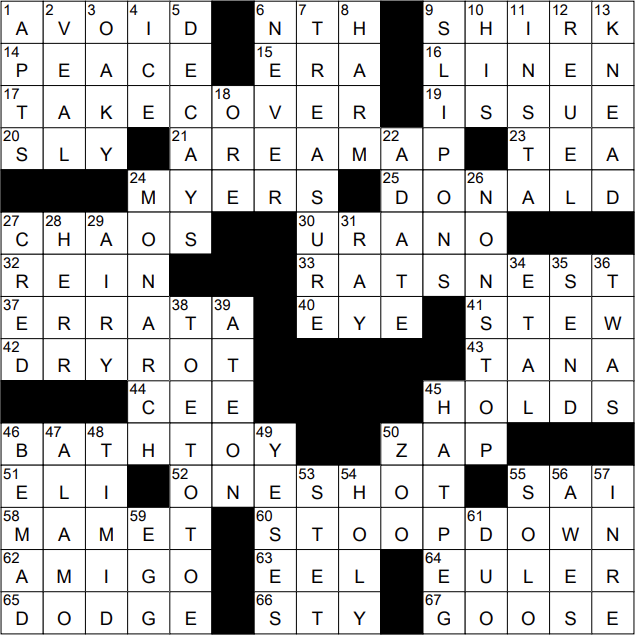 Constructed by: Joseph Gangi
Edited by: Will Shortz

Today’s Theme (according to Bill): Ducks

Themed clues are all “Duck”, or duck-related. And, there’s a duck outlined in black squares in the middle of the grid:

The textile known as linen is made from flax fibers. The name “linen” probably comes from “linum”, which is Latin for both “flax” and “textile made from flax”.

Our word “napkin” dates back to the 1300s, when it had the same meaning as today. The term comes from the old French word “nape” meaning “tablecloth” and the Middle English suffix “-kin” meaning “little”. So, a napkin is a little tablecloth.

I guess the reference here is to the oft-quoted British phrase “a spot of tea”. Mind you, I’ve only ever heard that said in jest …

Donald Duck was created in 1934 by Walt Disney Productions, and first appeared in “The Wise Little Hen” in 1934. Donald’s full name is Donald Fauntleroy Duck.

“Urano-” comes from the Greek “ouranos” denoting the heavens.

Lake Tana is the largest lake in Ethiopia, and is the source of the Blue Nile. The lake has a number of islands of significant size, many of which are home to ancient monasteries.

The term “cotton gin” is a contraction of “cotton eng-ine”. The gin is a machine that mechanically separates cotton fibers from the cotton seed. The modern version of the cotton gin was invented by Eli Whitney in 1793.

Leonhard Euler was a brilliant Swiss mathematician and physicist, and a pioneer in the fields of logarithms and graph theory. Euler’s eyesight deteriorated during his working life, and he eventually became almost totally blind.

“Duck, Duck, Goose” is a kid’s game, and not one that I’ve heard of outside of crosswords to be honest …

Veal is the meat from calves, whereas beef is the meat from mature cattle. Most veal comes from male calves, as the females can be more valuable as producers of cow’s milk. Historically, veal production has been one of the most controversial practices in animal farming. Some farmers restricted the movement of veal calves by confining them in crates for the whole of their short lives in order to produce paler and more tender meat.

Oak barrels are sometimes used to store wine during fermentation and aging. The oak wood has a profound effect, usually changing the wine’s color, flavor and texture. If the wine is stored in stainless steel barrels, then a similar effect can be achieved by adding oak chips or staves to the liquid.

A tumbler is a glass. Back in the 1660s a tumbler was a glass with a rounded or pointed base so that it could not be put down without spilling its contents, as it would “tumble” over. The idea was that one had to drink up before putting the glass down.

Chick Hearn was the play-by-play announcer for the LA Lakers for 36 years, from 1965 until 2001. Hearn coined, or at least popularized, phrases such as “slam dunk”, “air ball” and “no harm, no foul”.

The monarch butterfly has very recognizable orange and black wings, and is often seen across North America. The monarch is the state insect of several US states and was even nominated as the national insect in 1990, but that legislation was not enacted.

28 What to call a man in Mannheim : HERR

The Tampa Bay Rays are a relatively young franchise, having been formed in 1998. The initial name of the franchise was the Tampa Bay Devil Rays. While known as the Devil Rays, the team finished last in the league almost every year. The name was changed to the Tampa Bay Rays in 2008, and I am told the Rays started into a streak of winning seasons soon after.

The San Antonio mission known as the Alamo may have been named for a grove of nearby cottonwood trees. “Álamo” is the Spanish name for the cottonwood.

The word “pandemonium” was coined in 1667 by John Milton in his epic poem “Paradise Lost”. It is the name he invented for the capital of Hell, “the High Capital, of Satan and his Peers”.

“Gobsmack” is slang from Britain and Ireland. “Gob” is also slang, for “mouth”. So someone who is gobsmacked has received a smack in the “mouth”, is stunned.