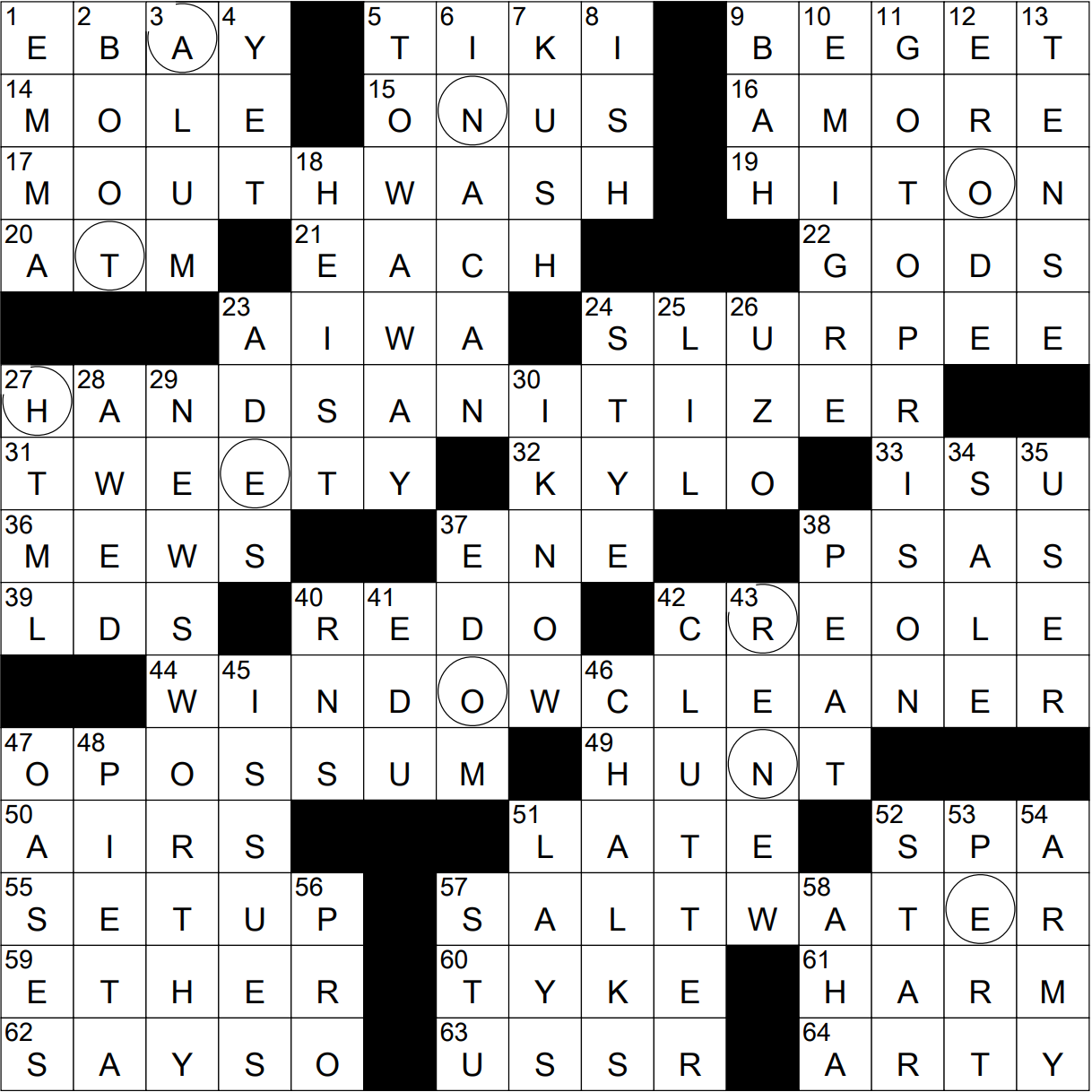 This puzzle has four different solutions. When you’re done, read the circled letters from top to bottom to find another one.

Well, those four different “solutions” are the four themed answers, all “solutes” dissolved in “solvents”. And, the circled letters spell out “ANOTHER ONE”, literally:

The Māori are the indigenous people of New Zealand. They are eastern Polynesian in origin and began arriving in New Zealand relatively recently, starting some time in the late 13th century. The word “māori” simply means “normal”, distinguishing mortal humans from spiritual entities. The Māori refer to New Zealand as “Aotearoa”.

Despite the fact that the term “beget” appears in the English translation of the Bible, the use of “beget” in the sense of procreation only dates back to about 1200 AD. Prior to that, “beget” meant “to acquire, seize”.

A mole is a spy who works from within the ranks of an enemy’s government of intelligence service. The use of “mole” took off after the publication of John Le Carré’s 1974 novel “Tinker, Tailor, Soldier, Spy”. The author was himself a former intelligence officer and asserts that “mole” was a term used by the KGB, whereas Western agencies used the term “sleeper agent”.

“American Gods” is a 2001 fantasy novel by English author Neil Gaiman. The book has been adapted into a TV series, with the first season airing on Starz in 2017. It’s all about gods and mythological creatures in contemporary America. Not my cup of tea, although there is a leprechaun named Mad Sweeney in the mix …

31 “Headliner” of the first Warner Bros. short to win an Oscar : TWEETY

Tweety Bird is a yellow canary character that appears in Warner Brothers cartoons. In the main, Tweety Bird was voiced by the great Mel Blanc.

Indiana State University (ISU) was established in Terre Haute in 1865, as the Indiana State Normal School. ISU’s sports teams are called the Sycamores.

The Ad Council is a nonprofit that produces public service announcements (PSAs) for various groups, including agencies of the US government. Conceived in 1942, the council operated under the name “War Advertising Council” from 1943 to 1946. It was this organization that produced the famous wartime ads promoting military enlistment, conservation of war materials, and the purchase of war bonds. President Franklin D. Roosevelt made it clear that he wanted the Ad Council to continue its work after the war, and he got his wish.

39 Grp. that advertised in “The Book of Mormon” playbills, surprisingly : LDS

“The Book of Mormon” is a satirical musical by Trey Parker and Matt Stone (of “South Park” fame) and Robert Lopez (of “Avenue Q” and “Frozen” fame). The show follows two missionaries from the Mormon Church seeking converts in a remote village in Uganda.

Ctrl+Z is a keyboard shortcut for the command UNDO.

3 Who might be asked for a donation, in brief : ALUM

13 It may be perfect for writing : TENSE

23 Some sources of vitamin C : ADES

The essential nutrient referred to as vitamin C is also known as L-ascorbic acid or ascorbate. A lack of vitamin C causes the disease scurvy.

28 How you might feel looking at the Northern Lights : AWED

37 Biblical land near the kingdoms of Judah and Moab : EDOM

The Pietà is a representation of the Virgin Mary holding in her arms the dead body of her son Jesus. The most famous Pietà is undoubtedly the sculpted rendition by Michelangelo that is located in St. Peter’s Basilica in Vatican City. That particular sculpture is thought to be the only work that Michelangelo signed. In some depictions of the Pietà, Mary and her son are surrounded by other figures from the New Testament. Such depictions are known as Lamentations.