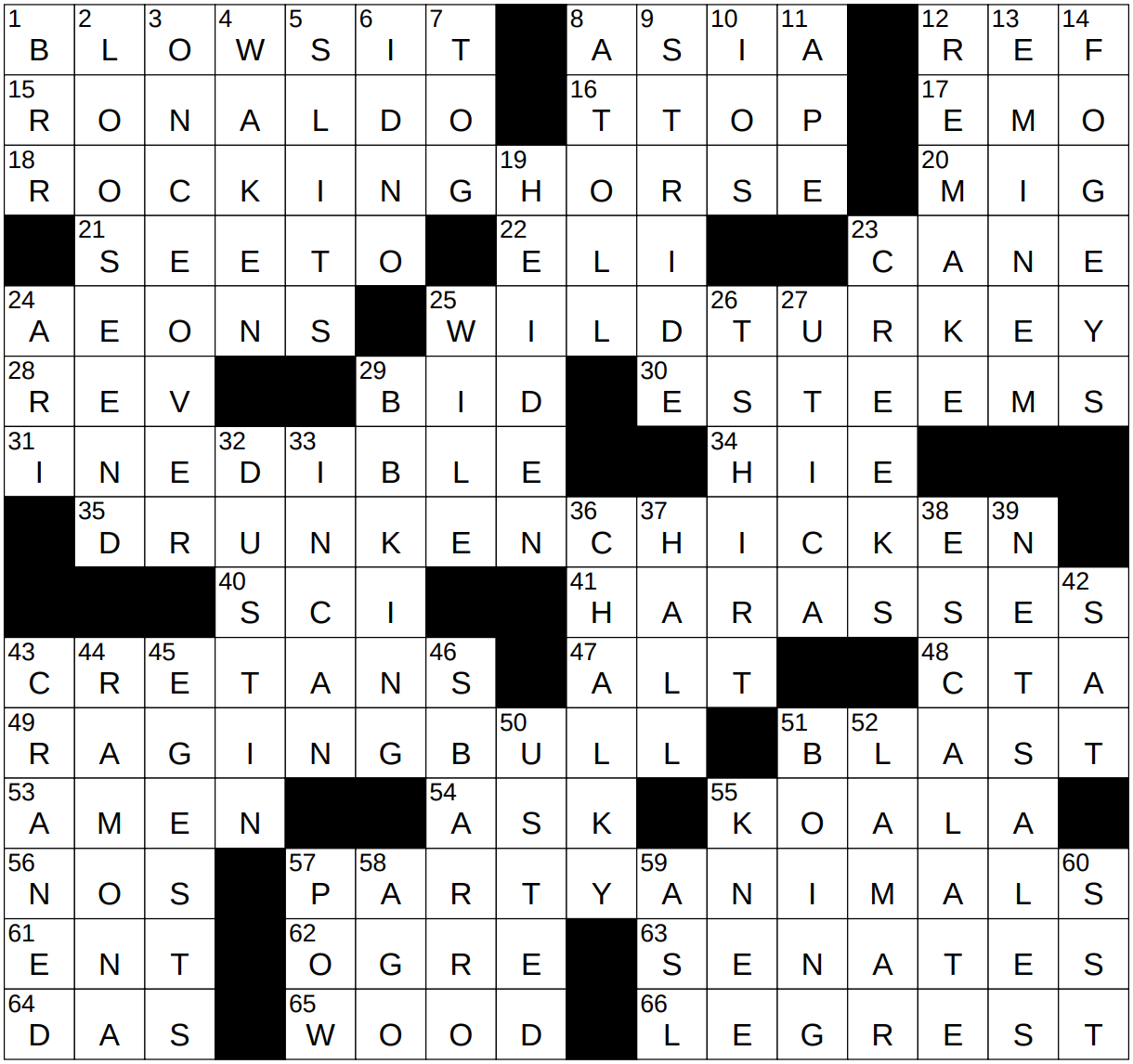 Themed answers each start with a synonym of “PARTY”, and end with an ANIMAL:

Cristiano Ronaldo is a professional soccer player from Portugal who is often referred to as the finest player in the world. Ronaldo spent five years playing in the UK with Manchester United, and then relocated to Spain to play for Real Madrid starting in 2009.

The Minoans were a Bronze Age people that lived on the island of Crete from about 270 to 1450 BCE. Evidence of the Minoan civilization was uncovered by the British archaeologist Arthur Evans at the beginning of the 20th century. Evans coined the term “Minoan” after King Minos of myth, who was said to have built the Labyrinth on the island that housed the Minotaur.

I just do not like boxing, nor movies about boxing, but I certainly accept that “Raging Bull” is a true cinema classic. It is a biopic released in 1980, with Robert De Niro starring as Jake LaMotta, and ably directed by Martin Scorsese. Famously, De Niro gained about 70 pounds in weight to lay LaMotta in his early years, showing true dedication to his craft.

Our word “senate” comes from the Latin name for such a body, namely “senatus”. In turn, “senatus” is derived from “senex” meaning “old man”, reflecting the original Roman Senate’s makeup as a council of “elders”.

“Das Kapital” (entitled “Capital” in English versions) is a book about political economy written by Karl Marx, first published in 1867. The book is in effect an analysis of capitalism, and proffers the opinion that capitalism relies on the exploitation of workers. Marx concludes that the profits from capitalist concerns come from the underpaying of labor.

Stride is a jazz piano style that features an “oom-pah” action with the left hand, alternating between a bass note and a chord.

13 Slim Shady, by another name : EMINEM

Eric Heiden is a former American speed skater, the most successful athlete to compete in any single Winter Olympics. He won five gold medals at the 1980 games in Lake Placid. After retiring from the ice, Heiden became a doctor and is now an orthopedic surgeon in Salt Lake City.

Ramona Quimby is a character in a series of “Henry Huggins” children’s novels penned by Beverly Cleary. As she aged, Ramona merited her own set of stories.

“Oh! Susanna” is a song that was published in 1848, written by Stephen Foster. The song is often called “Banjo on My Knee”, an understandable slip given the words of the chorus. “Oh! Susanna” came to be associated with the Forty-Niners, the miners who traveled to California in the 1849 Gold Rush. The lyrics were changed to suit the Gold rush theme with “Alabama” being replaced by “California”, and “banjo” being replaced by “washpan”.

“Kisser”, “trap” and “yap” are slang terms for the mouth.

58 Fourth word in the “Star Wars” prologue : AGO