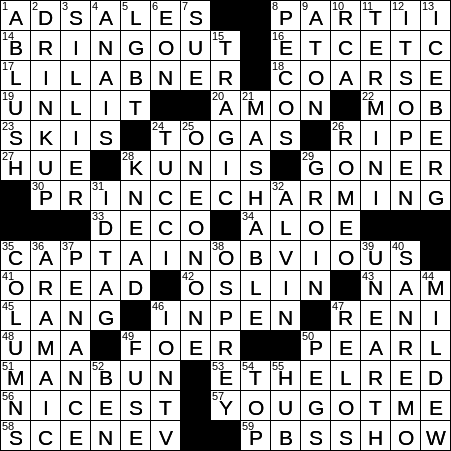 Sadie Hawkins is a character in Al Capp’s comic strip “Li’l Abner”. Sadie was in search of a husband and so declared a “Sadie Hawkins Day” in which she chased the local men in a foot race, with marriage as the prize when one was caught. Starting in 1938, Sadie Hawkins Dances were introduced in schools across the US, to which the woman invites the man of her choosing.

19. Like seven candles on the first night of Hanukkah : UNLIT

Aloe vera has a number of alternate names that are descriptive of its efficacy as a medicine. Ancient Egyptians knew it as the plant of immortality, and Native Americans called it the wand of heaven.

8. River to the Rio Grande : PECOS

“The Lovely Bones” is a remarkable film directed by Peter Jackson (of “Lord of the Rings” fame). It stars the incredibly talented Irish actress, Saoirse Ronan, who plays a 14-year-old girl who has been murdered and is living in a surreal “in-between” world that is neither Heaven nor Earth. I usually find computer-generated graphics in movies overpowering and distracting, but this movie uses the technique to create a beautiful backdrop that really brings the story to life.

In Shakespeare’s “Romeo and Juliet”, the last words uttered by Romeo are:

Alvin and the Chipmunks is a cartoon musical group that was created for the recording of a novelty song in 1958 called “The Chipmunk Song (Christmas Don’t Be Late)”. The three Chipmunks (Alvin, Simon and Theodore) were all voiced by singer Ross Bagdasarian, Sr. but with a speedy playback to create high-pitched voices.

35. 38 things in the Lincoln Memorial : COLUMNS

The Italian city of San Remo sits on the Mediterranean, right on the border with France. In Italian the city is named Sanremo, just one word, although the spelling “San Remo” dates back to ancient times.