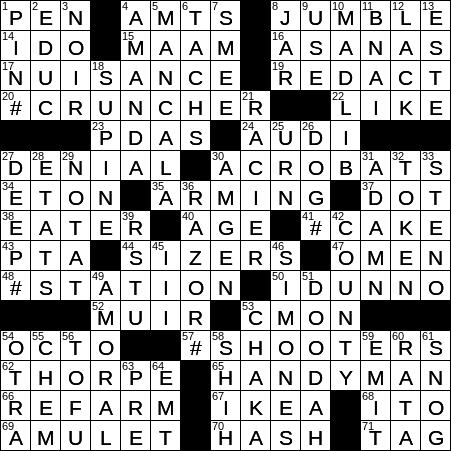 Constructed by: Nate Cardin
Edited by: Will Shortz

Themed answers include a rebus square containing the # symbol. The meaning of that symbol is different for each of the four pairs of themed answers:

23. Smartphones replaced them, for short : PDAS

37. Feature of two lowercase letters of the alphabet : DOT

The sports star Jim Thorpe was quite the all-rounder. He played professional football, baseball, and basketball, and also won Olympic golds in two other all-rounder events, the pentathlon and decathlon (in 1912). However, he lost his medals when it was revealed that he had been paid for playing baseball before the Games, and back then, amateur status was important to the Olympic governing body.

There is no actual game called “mancala”, and rather it is the name given to a genre of hundreds of games. Mancala are count-and-capture games that are particularly popular in Africa. Some of the most popular examples of the genre are Bao la Kiswahili, Congkak, Kalah and Oware.

AMGen is a biotechnology company that was founded in 1980 as Applied Molecular Genetics. The company’s headquarters is in Thousand Oaks, California.

45. Article of the Constitution that provides for the Supreme Court : III

The Shih Tzu is one of the oldest breeds of dog, and a breed that originated in China. Shih Tzus have long hairy coats but they don’t shed.