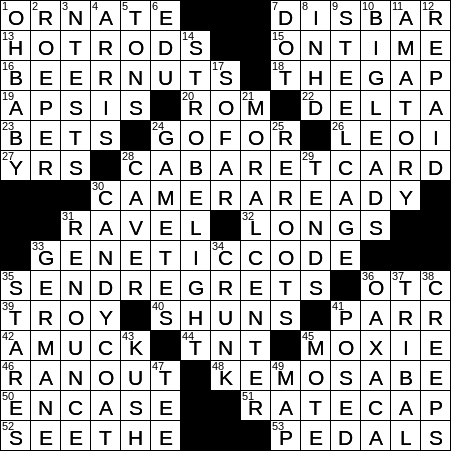 “Greaser” is an informal term describing an engine mechanic.

19. Either of two extremes in an orbit : APSIS

Henry VIII was the English King with the most wives. Well, something rubbed off on his last wife, Catherine Parr. She was to become the English Queen with the most husbands! By the time she married Henry she had been widowed twice, and after Henry died she married once again, racking up four husbands in all.

Back as far as 1876, Moxie was a brand name of a “medicine” peddled with the claim that it “built up your nerve”. In 1924, Moxie was registered as a trademark for a bitter, non-alcoholic beverage (no more claims of nerve-building). And we’ve used the term “moxie” to mean “nerve” ever since …

On a piano with three pedals, the middle pedal is a called a sostenuto pedal. This pedal “sustains” the sound of the notes that are being held down on the keyboard when it is pressed. The instruction to use the sostenuto pedal can be written as “sost. ped.” on a musical score. The sostenuto pedal differs from the sustain pedal in that the latter undamps all the strings at the same time.

Richard Roeper is columnist and film critic for “The Chicago Sun-Times”, and came to national attentions when he replaced Gene Siskel as co-host with Roger Ebert on the famous film review TV show. Roeper started work with Ebert in 2000, after Siskel died in 1999. Roeper stayed with the show right through 2008, even though Ebert had to bow out in 2006 as he recovered from cancer surgery.

3. Sources of some tremors : N-TESTS

“Mrs ‘Arris Goes to Paris” is novel by Paul Gallico that was first published in 1958. The novel evolved into a 4-book series of “Mrs ‘Arris” stories, all about the adventures of a London charwoman.

American novelist Paul Gallico had many of his works adapted into screenplays for the big screen. The most famous adaptation is probably “The Poseidon Adventure”, but there is also “Pride of the Yankees” and “The Snow Goose”.

7. With 6-Down, what may follow Indiana or Illinois : DOT

“Speleology” is the scientific study of caves, coming from “spelaeum”, the Latin for “cave”.