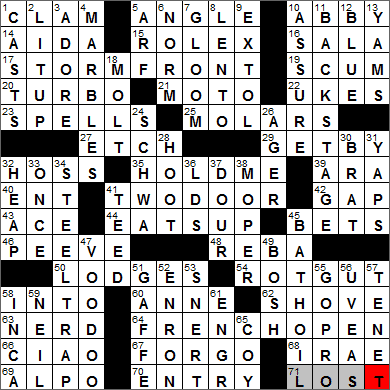 Today’s Wiki-est, Amazonian Googlies
Across
1. Chowder ingredient : CLAM
The type of soup known as “chowder” may be named for the pot in which it used to be cooked called a “chaudière”, a French term.

5. Go fish : ANGLE
We use the verb “to angle” to mean “to fish” because “angel” was an Old English word for a hook.

10. “Dear” advice-giver : ABBY
The advice column “Dear Abby” first appeared in 1956. Pauline Phillips was Abby back then, but now the column is written by Jeanne Phillips, her daughter. The full name of the “Abby” pen name is Abigail Van Buren, which Pauline Phillips came up with by combining “Abigail” from the biblical Book of Samuel, and “Van Buren” after the former US president.

14. Opera set in Egypt : AIDA
“Aida” is the famous opera by Giuseppe Verdi, actually based on a scenario written by French Egyptologist Auguste Mariette. Mariette also designed the costumes and stages for the opening performance. The opera was first staged in 1871 in an opera house in Cairo. In the storyline, Aida is an Ethiopian princess brought into Egypt as a slave. Radames is an Egyptian commander who falls in love with her, and then of course complications arise!

15. Pricey watch : ROLEX
My most prized possession is a stainless steel Rolex watch that my uncle bought while serving with the RAF in Canada during WWII. Rolex watches were made available to the Canadian servicemen at that time as they were shipping overseas. My uncle brought his Rolex home to Ireland after the war. He needed money for booze one weekend and so sold the watch to my Dad, for five pounds. My Dad gave it to me just before he died, as he knew I loved the watch, and my brothers weren’t interested in it all. Not so long ago I had the watch appraised ($3,000!), and my brothers all of a sudden took a liking to it! Still, it’s not something that will ever be sold …

A “hacienda” is a large estate, in Spanish.

20. Extra-powerful engine : TURBO
A turbocharger is a device that is designed to extract more power out of an internal combustion engine. It does so by increasing the pressure of the air entering the intake. The pressure increase comes from the use of a compressor, which is cleverly powered by the engine’s own exhaust gases.

21. Mr. ___ (Peter Lorre role) : MOTO
The mysterious Mr. Moto is a Japanese secret agent who appears in six novels by American author, John P. Marquand. Mr. Moto was famously played by Peter Lorre in a series of eight films released in the 1930s.

22. What some strummers strum, informally : UKES
The ukulele originated in the 1800s and mimicked a small guitar brought to the Hawaiian Islands by Portuguese immigrants.

32. “Bonanza” brother : HOSS
Dan Blocker was the actor who played Hoss Cartwright in the famous TV show “Bonanza”. Hoss was the “slow” character on the show. Paradoxically, Dan Blocker was the most educated member of the cast, having earned a Masters Degree in the dramatic arts. Blocker passed away while “Bonanza” was still running. He was undergoing relatively routine gallbladder surgery and developed a pulmonary embolism which killed him. Bonanza ran for just one more season after Blocker passed away.

The western TV series “Bonanza” ran for 14 seasons, making it the second longest running western show on television (after “Gunsmoke”, which ran for 20 seasons).

35. 1982 Fleetwood Mac hit whose title is sung three times after “Come on and” : HOLD ME
Fleetwood Mac was founded in 1967 in London. The band was started by Peter Green, and he chose the name from two friends in former bands (named Fleetwood and McVie). This etymology is particularly noteworthy, given that the drummer’s name happens to be Mick Fleetwood.

40. Tolkien creature : ENT
Ents are those tree-like creatures that live in J. R. R. Tolkien’s Middle-earth in his series of books “The Lord of the Rings”. “Ent” is an Old English word for “giant”.

41. Coupe, e.g. … or a hint to 17- and 64-Across and 11- and 34-Down : TWO-DOOR
The type of car known as a “coupe” or “coupé” is a closed automobile with two doors. The name comes from the French word “couper” meaning “to cut”. In most parts of the English-speaking world the pronunciation adheres to the original French, but here in most of North America we go with “coop”. The original coupé was a horse-drawn carriage that was cut (coupé) to eliminate the rear-facing passenger seats. That left just a driver and two front-facing passengers. If the driver was left without a roof and out in the open, then the carriage was known as a “coupé de-ville”.

48. McEntire of country : REBA
Reba McEntire is a country music singer and television actress. McEntire starred in her own sitcom called “Reba” that aired on the WB and the CW cable channels from 2001 to 2007.

60. Meara of comedy : ANNE
Anne Meara has been married to fellow comedic actor Jerry Stiller since 1954. Anne and Jerry are the parents of actors Ben and Amy Stiller. Meara co-starred with Carroll O’Connor and Martin Balsam in the eighties sitcom “Archie Bunker’s Place”, a spinoff from “All in the Family”.

French doors usually come in pairs, and have glass panels throughout the body of the door.

68. “Dies ___” (hymn) : IRAE
“Dies Irae” is Latin for “Day of Wrath” and is the name of a famous melody in Gregorian Chant, one that is often used as part of the Roman Catholic Requiem Mass.

69. Bowlful for Bowser : ALPO
Alpo is a brand of dog food first produced by Allen Products in 1936, with “Alpo” being an abbreviation for “Allen Products”. Lorne Greene used to push Alpo in television spots, as did Ed McMahon and Garfield the Cat, would you believe?

Down
4. Children’s game in which players “knuckle down” : MARBLES
“To knuckle down” means “to apply oneself earnestly”, and is an expression we’ve been using in English since the mid-1800s. The phrase comes from the game of marbles in which “to knuckle down” means to put a knuckle on the ground, assuming the appropriate hand position to shoot.

8. Slow, musically : LENTO
A lento passage is a piece of music that has a slow tempo.

13. Thanksgiving dish : YAMS
Although in the US we sometimes refer to sweet potatoes as “yams”, the yam is actually a completely different family of plants. True yams are more common in other parts of the the world than they are in this country, and are especially found in Africa.

24. Vowel sound represented by an upside-down “e” : SCHWA
A “schwa” is an unstressed and toneless vowel found in a number of languages including English. Examples from our language are the “a” in “about”, the “e” in “taken” and the “i” in pencil.

Laurence Olivier has to be one of the most respected actors to come out of England in the 20th century. He had tremendous impact on stage and screen, and was never short of work on either side of the Atlantic. While working in the British film industry just before WWII, Olivier met actress Vivien Leigh. The two married actors started an affair. Olivier travelled to Hollywood as he was cast as Heathcliff in “Wuthering Heights”, his big break in Hollywood. Leigh followed him, and found herself cast as Scarlett O’Hara in “Gone with the Wind”. The couple took Hollywood by storm, and eventually unraveled their prior marriages so that they could wed, in 1940.

36. Mormon Church inits. : LDS
The Church of Jesus Christ of Latter-day Saints, often abbreviated to “LDS”, is known colloquially as the Mormon Church.

41. Angry, with “off” : TEED
The term “teed off” meaning to be angry, has been around since the early fifties. It is probably a polite way of saying something that might be considered more offensive.

51. Faux pas : GAFFE
The term “faux pas” is French in origin, and translates literally as “false step” (or “false steps”, as the plural has the same spelling in French).

52. Noted bankruptcy of 2001 : ENRON
After all the trials following the exposure of fraud at Enron, several of the key players ended up in jail. Andrew Fastow was the Chief Financial Officer. He plea-bargained and received ten years without parole, and became the key witness in the trials of others. Even Fastow’s wife was involved and she was sentenced to one year for helping her husband hide money. Jeffrey Skilling (ex-CEO) was sentenced to 24 years and 4 months. Kenneth Lay (CEO) died in 2006 after he had been found guilty but before he could be sentenced. The accounting firm Arthur Andersen was found guilty of obstruction of justice for shredding thousands of pertinent documents and deleting emails and files (a decision that the Supreme Court later overturned on a technicality). But still, Arthur Andersen collapsed under the weight of the scandal and 85,000 people lost their jobs (despite only a handful being directly involved with Enron).

“Hagar the Horrible” is a comic strip that was created by the late Dik Browne and is now drawn by his son, Chris Browne. “Hagar the Terrible” (not “Horrible”) was the nickname given to Dik by his sons.

56. Eye parts : UVEAS
The uvea is the middle of the three layers that make up the eyeball.

58. Ancient Andean : INCA
The Inca Empire was known as the Tawantinsuyu, which translates as “land of the four quarters”. The Inca Empire was a federal organization having a central government that sat above four “suyu” or “quarters”, four administrative regions.

59. Dog on TV’s “Topper” : NEIL
The fantasy sitcom called “Topper” was a small-screen adaptation of the 1937 film of the same name. The movie stars Constance Bennett and Cary Grant, and was successful enough to merit two sequels. The television series stars Robert Sterling and Anne Jeffreys in the Grant/Bennett roles. The lead characters in the story are a happy-go-lucky couple who get killed in an accident and who come back as ghosts. The TV series includes a St. Bernard dog called Neil who is also a ghost.

61. M.I.T. grad, often: Abbr. : ENGR
The Massachusetts Institute of Technology (MIT) moved into its magnificent mile-long campus on the Cambridge side of the Charles River in 1906. The campus was built largely with funds donated by George Eastman, the founder of the Eastman Kodak Company.

65. Coquettish : COY
A “coquet” is a male flirt, with “coquette” being the name for a female flirt. The word comes from French, and is the diminutive of “coq”, the word for a cock. A cock might well be accused of “strutting his stuff” around the chicken run.