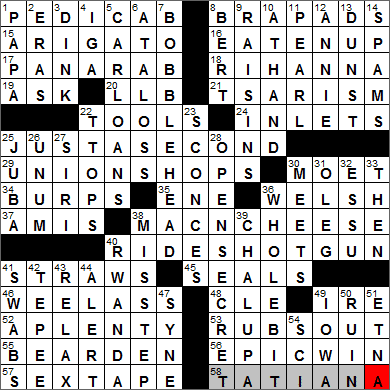 8. Lingerie enhancements : BRA PADS
“Lingerie” is a French term, but as used in France it just means any underwear, worn by either males or females. In English we use “lingerie” to describe alluring underclothing worn by women. The term “lingerie” comes into English via the French word “linge” meaning “washables”, and ultimately from the Latin “linum”, meaning “linen”. We tend not to pronounce the word correctly in English, either here in the US or across the other side of the Atlantic. The French pronunciation is more like “lan-zher-ee”, as opposed to “lon-zher-ay” (American) and “lon-zher-ee” (British).

18. Grammy-winning singer from Barbados : RIHANNA
The singer Rihanna was born and grew up on the island of Barbados and moved to the US when she was 16-years-old to pursue a singing career.

20. Barrister’s deg. : LLB
Bachelor of Laws (LLB) is a an undergraduate degree in law. The abbreviation “LLB” stands for Legum (LL, for the plural “laws”) Baccalaureus (B, for Bachelor).

30. Bubbly brand, for short : MOET
Moët & Chandon is a French winery, one of the world’s largest producers of champagne. The company was founded by wine trader Claude Moët in 1743. The name was changed to Moët & Chandon in the 1830s when Pierre-Gabriel Chandon, an in-law to the Moët family, was given co-ownership. Moët & Chandon owns the famous Dom Pérignon brand name, honoring the Benedictine monk who did so much to improve the quality of champagne.

35. Des Moines-to-Cedar Rapids dir. : ENE
The city of Des Moines is the capital of Iowa, and takes its name from the Des Moines River. The river in turn takes its name from the French “Riviere des Moines” meaning “River of the Monks”. It looks like there isn’t any “monkish” connection to the city’s name per se. “Des Moines” was just the name given by French traders who corrupted “Moingona”, the name of a group of Illinois Native Americans who lived by the river. However, others do contend that French Trappist monks, who lived a full 200 miles from the river, somehow influenced the name.

Cedar Rapids is the second largest city in the state of Iowa. The city is named for rapids on the Cedar River on which it is located. The river itself was named for the red cedars that grew along the river’s banks.

37. “Money” novelist, 1984 : AMIS
I suppose the successful English novelist Martin Amis must have writing in his blood. He is the son of the respected author Kingsley Amis, a Booker Prize winner.

45. Fisherman’s Wharf attraction : SEALS
Fisherman’s Wharf is the name given to what is now a tourist mecca at the northern limits of San Francisco, right on San Francisco Bay. Historically it is where the city’s fishing fleet was moored and so the neighborhood became associated with the fishing community that was mainly made up of Italian immigrants. Pier 39 of Fisherman’s Wharf is also noted as the home to a colony of sea lions that took up residence in 1989. The sea lions now occupy wooden docks that were originally intended for boats.

46. Young colleen, across the North Channel : WEE LASS
“Cailín” is the Irish word for “girl”, and is usually anglicized as “Colleen”.

48. Browns’ home, for short : CLE
The Cleveland Browns football team was a charter member of the All-American Football Conference, formed in 1946. Cleveland is the only NFL city that has never hosted nor sent a team to the Super Bowl.

58. Mezzo-soprano Troyanos : TATIANA
Tatiana Troyanos was a celebrated mezzo-soprano from New York City. Troyanos had a highly successful international career and hundreds of distinguished performances with the Metropolitan Opera.

3. Soft touch? : DINK
In racquet sports, like badminton, a “dink” is a drop shot, a soft touch.

4. Supermarket inits. : IGA
IGA stands for Independent Grocers Alliance, a chain of supermarkets that extends right around the world. IGA’s headquarters is in Chicago.

6. Totally flummoxed : AT A LOSS
Flummoxed is another lovely word, meaning confused or perplexed. It is probably of English origin, derived from some local dialect.

7. Spring figure? : BOBBLEHEAD
Bobblehead dolls are those little toys with big heads that bobble around if tapped, while the body remains still. They’re often given to ticket buyers at sports events as a promotion.

8. Pitcher Blyleven with 3,701 strikeouts : BERT
Bert Blyleven is a former baseball pitcher known for his curveball. Blyleven now works as the color commentator for the Minnesota Twins.

12. “Little Girls” musical : ANNIE
“Little Girls” is a song written for the Broadway musical “Annie”. The musical was based on the Harold Gray comic strip “Little Orphan Annie”. There were two subsequent film adaptations, both really quite successful, including one released in 1982 directed by John Huston of all people. “Annie” was Huston’s only ever musical.

13. Actress Kirsten : DUNST
Kirsten Dunst is a Hollywood actress from Point Pleasant, New Jersey. Dunst is perhaps best known for playing the love interest and female lead in the “Spider-Man” series of movies opposite Tobey Maguire. Personally, my favorite Dunst films are “Wimbledon” and “Marie Antoinette”. Dunst is a dual citizen of the US and Germany, as her father is from Hamburg.

14. Hits with some trash : SPAMS
Apparently the term “SPAM”, used for unwanted email, is taken from a “Monty Python” sketch. In the sketch (which I’ve seen) the dialog is taken over by the word SPAM, a play on the glut of canned meat in the markets of Britain after WWII. So “SPAM” is used for the glut of emails that takes over online communication. I can just imagine nerdy Internet types (like me) adopting something from a “Monty Python” sketch to describe an online phenomenon …

22. Sporty auto options : T-TOPS
A T-top is a car roof that has removable panels on either side of a rigid bar that runs down the center of the vehicle above the driver.

23. Torch carriers : SCONCES
A sconce is a light fixture that today uses electric bulbs, but in the past used candles and torches. The defining feature of a sconce is that it is supported by a wall and does not have a base that stands on the ground. Usually the light is indirect, projected upwards towards the ceiling.

27. Her voice was first heard in 2011 : SIRI
Siri is software application that works with Apple’s iOS operating system. “Siri” is an acronym standing for Speech Interpretation and Recognition Interface. You’ve probably seen the ads on television, with folks talking to their iPhones asking for information and responding with a voice. I hear that Google is a little scared by Siri, as Siri is non-visual. There’s no need to touch a screen or a keyboard to work with Siri, no opportunity to click on one of Google’s ads!

31. Designer Cassini : OLEG
Oleg Cassini, the French-born American fashion designer, had two big names particularly associated with his designs. In the sixties he produced the state wardrobe for First Lady Jacqueline Kennedy, and he was also the exclusive designer for Hollywood’s Gene Tierney, who was Cassini’s second wife.

33. Segue starter : THEN
A “segue” is a transition from one topic to the next. “Segue” is an Italian word that literally means “now follows”. It was first used in musical scores directing the performer to play into the next movement without a break.

39. Fried tortilla dish : CHALUPA
A chalupa is a Mexican dish consisting of a tostada shaped into a “cup” and filled with various ingredients. “Chalupa” translates from Mexican Spanish as “small boat”.

40. Landlocked African land : RWANDA
Rwanda is a sovereign nation in central Africa that is populated by three groups: the Hutu, Tutsi and Twa. The Tutsi are the second largest population of people in Rwanda, with the Hutu being the largest group. The bloody conflict that has existed between the Tutsi and Hutu peoples dates back to about 1880 when Catholic missionaries arrived in the region. The missionaries found that they had more success converting the Hutus than the Tutsi, and when the Germans occupied the area during WWI they confiscated Tutsi land and gave it to Hutu tribes in order to reward religious conversion. This injustice fuels fighting to this very day.

41. Collectors of DNA samples : SWABS
I’ve always been fascinated by the fact that the DNA of living things is so very similar across different species. Human DNA is almost exactly the same for every individual (to the degree of 99.9%). However, those small differences are sufficient to distinguish one individual from another, and to determine whether or not individuals are close family relations.

42. Hides from Indians, maybe? : TEPEE
A tepee (also written as “tipi” and “teepee”) is a cone-shaped tent traditionally made from animal hides that is used by the Great Plains Native Americans. A wigwam is a completely different structure and is often a misnomer for a tepee. A wigwam is a domed structure built by Native Americans in the West and Southwest, intended to be a more permanent dwelling. The wigwam can also be covered with hides but more often was covered with grass, reeds, brush or cloth.

44. All-points bulletin, e.g. : ALERT
An All Points Bulletin (APB) is a broadcast from one US law enforcement agency to another.

47. Final word in a holiday tune : SYNE
The song “Auld Lang Syne” is a staple at New Year’s Eve, the words of which were written by Scottish poet Robbie Burns. The literal translation of “Auld Lang Syne” is “old long since”, but is better translated as “old times”. The sentiment of the song is “for old time’s sake”.

49. Locale for many political debates : IOWA
The Iowa caucuses have been the first major electoral event in the nominating process for President since 1972.

50. Perdition : RUIN
“Perdition” used to mean “utter ruin, total loss” but is now used in the sense of the loss of the soul or eternal damnation. The term is derived from the Latin “perdere” meaning “to lose”.

51. Site of the Bocca Nuova crater : ETNA
There are five distinct craters at the summit of Mount Etna:

Mt. Etna is the largest of three active volcanoes in Italy. Mt Etna is about 2 1/2 times the height of its equally famous sister, Mt. Vesuvius.