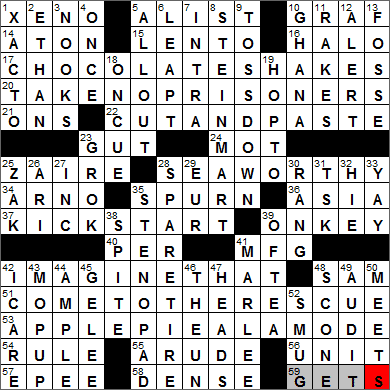 Today’s Wiki-est, Amazonian Googlies
Across
1. Start of a phobia? : XENO-
Xenophobia is the uncontrollable fear of foreigners. The word comes from Greek, with “xeno” meaning guest, stranger or foreigner, and “phobia” meaning fear, horror or aversion.

10. Five-time U.S. Open winner : GRAF
Steffi Graf is a former World No. 1 professional tennis player from Germany. Graf won 22 Grand Slam singles titles, more than any other man or woman other than Margaret Court. She is married to another former World No. 1, namely Andre Agassi.

15. Leisurely : LENTO
A lento passage is a piece of music that has a slow tempo.

17. Malted alternatives : CHOCOLATE SHAKES
Walgreens claims to have introduced the malted milkshake, in 1922.

24. Verbal gem : MOT
“Bon mot” translates from French as “good word”. We use “bon mot”, and sometimes just “mot”, to mean a quip or a witticism.

25. Bygone country name or its currency : ZAIRE
The African nation once called Zaire is a neighbor of Rwanda. The genocide and war in Rwanda spilled over into Zaire in 1996, with the conflict escalating into what is now called the First Congo War. As part of the war’s fallout there was a regime change, and in 1997 Zaire became the Democratic Republic of Congo.

34. It springs from Monte Falterona : ARNO
The Arno is the principal river in the Tuscany region of Italy, passing through the cities of Florence and Pisa. Famously the Arno flooded in 1966, the worst flood in the region for centuries. There were numerous deaths and extensive destruction of priceless art treasures, particularly in Florence.

Monte Falterona is a mountain in the Apennine range that runs the length of Italy. One of Monte Falterona’s claims to fame is that it is the source of the Arno River that runs through Tuscany and on which sit the cities of Florence and Pisa.

36. Place for tiger woods? : ASIA
The tiger is the largest species of cat in the world, and can weigh over 650 pounds with a length of up to 11 feet. Tigers are now an endangered species, and have lost over 90% of their natural habitat.

48. One of the muskrats in the 1976 hit “Muskrat Love” : SAM
“Muskrat Love” was a hit in 1976 for Captain & Tennille. The song tells of a romance between two muskrats named Susie and Sam.

53. Dual diner dish : APPLE PIE A LA MODE
In French, “à la mode” simply means “fashionable”. In America, the term has come to describe a way of serving pie, usually with ice cream, or as I recall from when I lived in Upstate New York, with cheese.

In the play “As You Like It”, there is a speech that yields one of the most-quoted phrases written by William Shakespeare, namely “all the world’s a stage”:

56. Newton, e.g. : UNIT
Newtons are units of force. The newton is of course named for Sir Isaac Newton, the English physicist and mathematician.

Sir Isaac Newton was of course one of the most influential people in history, the man who laid the groundwork for all of classical mechanics. The story about an apple falling on his head, inspiring him to formulate his theories about gravity, well that’s not quite true. Newton often told the story about observing an apple falling in his mother’s garden and how this made him acutely aware of the Earth’s gravitational pull. However, he made no mention of the apple hitting him on the head.

57. Event with body cords : EPEE
The French word for sword is “épée”. In competitive fencing the épée is connected to a system that records an electrical signal when legal contact is made on an opponent’s body.

Down
1. Brand of blades : X-ACTO
The X-Acto knife was invented in the thirties by a Polish immigrant, although his intention was to come up with a scalpel for surgeons. The knife couldn’t cut it as a scalpel though (pun intended!), because it was difficult to clean. The inventor’s brother-in law suggested it be used as a craft knife, and it is still around today.

2. Brand of literature : ETHAN
Nathaniel Hawthorne wrote the short story “Ethan Brand – A Chapter from an Abortive Romance”, in 1850.

3. Where seekers may find hiders : NOOKS
Someone playing hide and seek might find someone hiding in a nook.

8. Chain of off-price department stores : STEIN MART
Stein Mart department stores are primarily located in the southeast and Texas, and are headquartered in Jacksonville, Florida. The first Stein Mart was opened in Greenville, Mississippi in 1908 by Russian immigrant Sam Stein.

10. Home of the world’s largest artificial lake : GHANA
Lake Volta is the largest artificially formed lake in the world by surface area, and the fourth largest by volume. The lake has a surface area of over 3,000 square miles. Lake Volta is located almost totally in the Republic of Ghana in West Africa. It is formed by the Akosombo Dam that holds back the White Volta River and the Black Volta River.

12. Like prairie dogs, notably : ALERT
The prairie dog is a type of ground squirrel that is found in the grasslands of North America. Prairie dogs are so named because they inhabit prairies and because they have a warning call that is similar to the bark of a dog.

13. “Pippin” Tony winner : FOSSE
“Pippin” is a stage musical by Stephen Schwartz that was first produced in 1972, on Broadway. The original Broadway production was directed and choreographed by Bob Fosse, for which work Fosse won two Tony Awards in 1973. The title character’s father in “Pippin” is named Charlemagne. The father-son characters are inspired by the Holy Roman Emperors Charlemagne and Pepin.

23. Get inside and out : GROK
“To grok” is to understand, a slang word really only used in “techie” circles. “Grok” is the creation of science fiction author Robert Heinlein, who coined the term in his 1961 novel “Stranger in a Strange Land”.

25. Director/screenwriter Penn : ZAK
Zak Penn is a screenwriter and director. Penn has writing credits for such movies as “Last Action Hero” (a terrible film) and “Incident at Loch Ness” (better).

26. “Exodus” character : ARI
“Exodus” is a wonderful novel written by American writer Leon Uris, first published in 1947. The book was incredibly well received by the public and is the second biggest bestseller in the US after “Gone with the Wind”. The hero of the piece is Ari Ben Canaan, played by Paul Newman in the 1960 film adaptation directed by Otto Preminger.

27. Magazine with an annual “500|5000” conference : INC
“Inc.” is a business magazine that specializes in articles about growing companies. “Inc.” publishes a list of the 500 fastest-growing private companies in the country each year, calling it the “Inc. 500”. The “Inc 5000” is an expanded list also published by the magazine.

35. One bound to hold notes? : STENO PAD
Stenography is the process of writing in shorthand. The term comes from the Greek “steno” (narrow) and “graphe” (writing).

39. Spot ___ : OF TEA
I guess the reference here is to the oft quoted English phrase “a spot of tea”. I’ve only ever heard that said in jest mind you …

41. Actress Matlin : MARLEE
Marlee Matlin won her well-deserved Oscar for the role she played in “Children of a Lesser God”. Matlin played opposite William Hurt in the movie, and won her Academy Award in in 1986 when she was just 21 years old. My favorite performance of hers though, was the recurring role she had in “The West Wing”.

45. Frost, to François : GELEE
“Gelée” is the French word for “frost”. It’s also the word used in France for Jello.

46. Human Development Report publisher, in brief : THE UN
The “Human Development Report” (HDR) is an annual United Nations publication that was first circulated in 1990. According to the 2010 report, the Sultanate of Oman is the nation that has made the greatest strides in human development over the past 40 years, with improvements cited in education, the empowerment of women and health care.