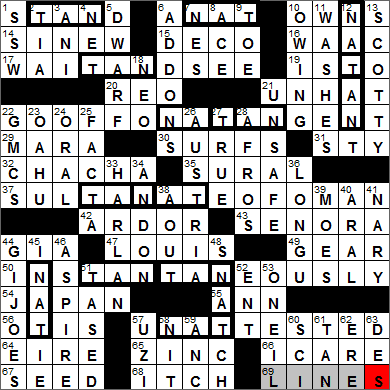 CROSSWORD SETTER: Jonathan Gersch
THEME: Tan Lines … there are 14 occurrences of the word TAN hidden in today’s grid, vertically and horizontally, and reading forwards or backwards:

61D. With 69-Across, beach markings … 14 of which are hidden vertically and horizontally elsewhere in this puzzle : TAN
69A. See 61-Down : LINES

Today’s Wiki-est, Amazonian Googlies
Across
14. Muscular strength : SINEW
Sinew is another name for a tendon. Tendons are bands of collagen that connect muscle to bone. Tendons are similar to ligaments and fasciae, which are also connective tissue made out of collagen, but ligaments join bone to bone, and fasciae connect muscle to muscle. We also use the term “sinew” to mean muscular power.

15. 30 Rock’s architectural style : DECO
Art deco is the name given to a style of design and architecture of the 1920s that actually had its roots in Belgium and then spread throughout Europe before arriving in North America. Celebrated examples of art deco architecture are the magnificent Chrysler Building in New York City completed in 1930, and the GE Building that sits in the middle of Rockefeller Center also in New York City, with the address of “30 Rock”.

16. Female mil. unit created 5/15/42 : WAAC
The Women’s Army Auxiliary Corps (WAAC) was formed in 1942, and the unit was converted to full status the following year to become the Women’s Army Corps (WAC). Famously, General Douglas MacArthur referred to the WACs as his “best soldiers”, saying they worked harder, complained less and were better disciplined than men. The WACs were disbanded in 1978 and the serving members were integrated into the rest of the army.

20. Flying Cloud of old autodom : REO
The REO Motor Company was founded by Ransom E. Olds (hence the name REO). The company made cars, trucks and buses, and was in business from 1905 to 1975 in Lansing, Michigan. Among the company’s most famous models were the REO Royale and the REO Flying Cloud.

29. Rooney ___, star of “The Girl With the Dragon Tattoo” : MARA
The actress Rooney Mara is noted for her role in the 2010 film “The Social Network” and more recently for the title role in the 2011 hit movie “The Girl with the Dragon Tattoo”. Mara has American Football in her blood. Her mother’s family founded the Pittsburgh Steelers and her father’s family founded the New York Giants.

“The Girl with the Dragon Tattoo” is a sensational hit novel by the Swedish author Stieg Larsson, originally titled in Swedish as “Men Who Hate Women”. It is the first in a trilogy of successful books, all of which were only published after Larsson’s death.

35. Relating to the calf : SURAL
Something described as “sural” is related to the calf of the leg. Examples would be the sural nerve and the sural arteries.

37. Mideast monarchy : SULTANATE OF OMAN
Oman lies on the southeast coast of the Arabian Peninsula and is neighbored by the OAE, Saudi Arabia and Yemen. The capital city of Muscat has a strategic location on the Gulf of Oman and has a history of invasion and unrest. Centuries of occupation by the Persians ended in 1507 when the Portuguese took the city in a bloody attack. The Portuguese held Muscat for much of the next one hundred years until finally being ousted by local Omani forces in 1648. A Yemeni tribe invaded the area in 1741 and set up a monarchy that has been in place in Oman ever since.

44. Model Carangi : GIA
Gia Carangi was a fashion model, often described as the world’s first supermodel. Carangi was from Philadelphia, and had her first modelling jobs appearing in newspaper ads. She started to abuse heroin in 1980, at 20 years of age. She contracted AIDS, and died at 26 years old. Carangi was one of the first famous women to succumb to the disease, in 1986.

54. Where some ex-major-leaguers play : JAPAN
Baseball was introduced in Japan by a Japanese student who had studied in the United States. In 1878, he and his co-workers at the national railway company where he worked created the first baseball team, called the Shimbashi Athletic Club. Japanese baseball is pretty much the same as Major League Baseball. That said, the ball is slightly smaller in Japan, as is the strike zone and the playing field. Also, teams can tie in Japan as the length of the game is limited.

55. ___ Taylor (clothing retailer) : ANN
There was no such woman as “Ann Taylor” associated with the Ann Taylor line of clothes. The name was chosen by the marketing professionals because “Ann” was considered to be “very New England” back in 1954 when the stores first opened, and “Taylor” suggested that clothes were carefully “tailored”.

56. Company that once owned the trademark “Escalator” : OTIS
Escalators have an advantage over elevators in that they can move larger numbers of people in the same time frame. They can also be placed in just about the same physical space that would be needed for a regular staircase. Patents for escalator-type devices were first filed in 1859, but the first working model wasn’t built until 1892 by one Jesse Reno. It was erected alongside a pier in Coney Island, New York, with the second escalator being placed at an entrance to the Brooklyn Bridge. Soon after, Elisha Otis and the Otis elevator company purchased the necessary patents and went into the business.

64. Cork’s locale : EIRE
The island of Ireland is known as “Éire “ in the Irish language. “Éire” is also the Irish name of the sovereign state known in English as the Republic of Ireland.

Down
2. Member of la familia : TIA
In Spanish, an aunt (tia) is a member of the family (la familia).

3. Purchase from Pat Sajak : AN I
Pat Sajak took over the hosting of “Wheel of Fortune” back in 1983 and has been doing the job ever since. Sajak had a short run as a talk show host in 1989/1990 and used to sub quite often for Larry King and Regis Philbin.

7. Super ___ (old game console) : NES
The Nintendo Entertainment System (NES) was sold in North America from 1985 to to 1995. The NES was the biggest selling gaming console of the era.

12. Floating : NATANT
Something described as “natant” is floating or swimming, from the Latin “natare” meaning “to swim”.

13. “Star Trek” character who says “Aye” a lot : SCOTTY
In the “Star Trek” series on television and in the movies, the colorful character of “Scotty” was played by the Canadian actor James Doohan. Doohan joined the Royal Canadian Artillery at the start of WWII, and participated in the D-Day Invasion of Normandy. After surviving the landing, that same day Doohan was shot by one of his own men in a tragic mishap. Doohan was hit six times, with a bullet to his chest stopped by a silver cigarette case he was carrying. One of Doohan’s fingers was shot off in the incident, an injury that he successfully concealed during his acting career.

22. Some pickups : GMCS
GMC is a division of General Motors (GM) established in 1901 that started out as “GMC Truck”.

23. Island with Yokohama Bay : OAHU
Yokohama Bay in Kaena Point State Park is home to one of the less crowded beaches on Oahu, I am told.

25. Statements in a legal case : FACTA
The Latin term “factum” is used in the legal world (I think) to mean “a man’s own act and deed”.

26. Alpine land : AUSTRIA
The name “Austria” is a Latin variant of the German name for the country: “Österreich”. “Österreich” itself means “Eastern borderlands”, a reference to the country’s history as a prefecture of neighboring Bavaria to the west.

28. Some “Hair” hairdos : AFROS
The full name of the famed stage show from the sixties is “Hair: The American Tribal Love-Rock Musical”. This controversial work outraged many when it was first performed in the sixties as it attacked many aspects of life at the time. For example, the song “Air” is a satirical look at pollution, sung by a character who comes onto the stage wearing a gas mask. The opening lines are “Welcome, sulfur dioxide. Hello carbon monoxide. The air … is everywhere”. I’ve never had the chance to see “Hair” in a live production, but it’s on “the bucket list” …

33. Sci-fi author Ellison : HARLAN
Harlan Ellison is an author from Cleveland, Ohio who is described as a writer of “speculative fiction”, a term that encompasses science fiction and other related genres like horror and fantasy. Ellison also wrote scripts for television shows such as “The Flying Nun”, “Route 66”, “Star Trek” and “The Man from U.N.C.L.E.”

39. Where Duff Beer is poured : MOE’S
Moe Szyslak is the surly bartender in “The Simpson” animated TV show. I don’t really care for “The Simpsons”, but Hank Azaria who supplies the voice for the character … him I like.

40. ___ Sea (now-divided waters) : ARAL
The Aral Sea is a great example of how man can have a devastating effect on his environment. In the early sixties the Aral Sea covered 68,000 square miles of Central Asia. Soviet Union irrigation projects drained the lake to such an extent that today the total area is less than 7,000 square miles, with 90% of the lake now completely dry. Sad …

44. Toys known as Action Men in the U.K. : GI JOES
G.I. Joe was the original “action figure”, the first toy to carry that description. G.I. Joe first hit the shelves in 1964. I had a “GI Joe” growing up, although over in the British Isles we played with “Action Man”, the brand name used under license from Hasbro in the US.

51. Shocked, in a way : TASED
Victor Appleton wrote a novel for young adults called “Tom Swift and His Electric Rifle”. The company that developed the TASER electroshock weapon named its product as a homage to the novel. The acronym TASER stands for “Thomas A. Swift’s Electric Rifle”. Interesting, eh?

52. Tolkien creature : ENT
Ents are those tree-like creatures that live in J. R. R. Tolkien’s Middle-earth in his series of books “The Lord of the Rings”. “Ent” is an Old English word for “giant”.

53. Negro leagues star Buck ___ : O’NEIL
Buck O’Neil was a first baseman and manager with the Kansas City Monarchs, a team in the Negro American League.

57. Assault weapon named for its designer : UZI
The first Uzi submachine gun was designed in the late 1940s by Major Uziel Gal of the Israel Defense Forces who gave his name to the gun.

63. ___ Plaines, Ill. : DES
Des Plaines, Illinois is a suburb of Chicago that is located next to O’Hare International Airport. The city is named for the Des Plaines river that runs through the suburb.