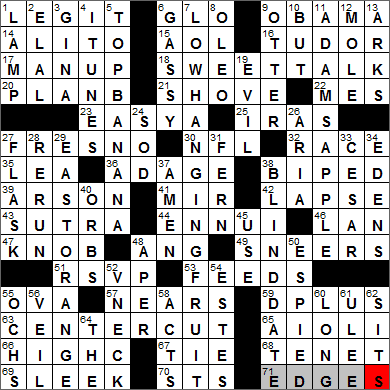 CROSSWORD SETTER: Ian Livengood
THEME: Low-Hanging Fruit … each of today’s themed answers is written in the down direction, and ends with the name of a fruit, a low-hanging fruit:

Today’s Wiki-est, Amazonian Googlies
Across
6. Day-___ paint : GLO
“Dayglo” is a registered trademark used for an ink or paint that glows when exposed to a black light in a darkened room. When Dayglo paint is viewed in daylight the colors can look particularly vivid because they respond to the UV light that is present in sunlight.

9. 2008 candidate with the slogan “Change we can believe in” : OBAMA
The 2008 campaign that resulted in the election of President Barack Obama used the slogan “Change we can believe in”, along with the associated chant “Yes We Can”. The words “Yes We Can” were perhaps borrowed from the United Farm Workers, which organization uses the motto “Sí, se puede”. “Sí, se puede” translates as “Yes, it is possible” and is a phrase very much associated with labor leader Cesar Chavez.

14. Supreme Court justice Samuel : ALITO
Associate Justice Samuel Alito was nominated to the US Supreme Court by President George W. Bush. Alito is the second Italian-American to serve on the Supreme Court (Antonin Scalia was the first). Alito studied law at Yale and while in his final year he left the country for the first time in his life, heading to Italy to work on his thesis about the Italian legal system.

16. English royal house before Stuart : TUDOR
The Wars of the Roses was a series of civil wars fought for the throne of England between the rival Houses of Lancaster and York. Ultimately the Lancastrians emerged victorious after Henry Tudor defeated King Richard III at the Battle of Bosworth Field. Henry was crowned King Henry VII, and so began the Tudor dynasty. Henry Tudor united the rival houses by marrying his cousin Elizabeth of York. Henry VII had a relatively long reign of 23 years that lasted until his death, after which his son succeeded to the throne as Henry VIII, continuing the relatively short-lived Tudor dynasty. Henry VIII ruled from 1509 until his death in 1547. Henry VIII was the last male to lead the the House of Tudor, as his daughter Queen Elizabeth I died without issue. When Elizabeth died, the Scottish King James VI succeeded to the throne as James I of England and Ireland. James I was the first English monarch of the House of Stuart.

23. Course that’s a cinch : EASY A
The term “cinch” was absorbed into American English from Spanish in the mid-1800s, when it was used to mean a “saddle-girth”. “Cincha” is the Spanish for “girdle”. In the late 1800s, “cinch” came to mean a ‘sure thing”, in the sense that a saddle-girth can provide a “sure hold”.

30. Org. for the Redskins, but not the Reds : NFL
The Washington Redskins NFL team were founded as the Boston Braves in 1932. The following year, the team moved to Fenway Park and the franchise name was changed to the Boston Redskins. The Redskins relocated to Washington in 1937.

41. Old Russian space station : MIR
The Russian Mir Space Station was a remarkably successful project, with the station still holding the record for the longest continuous manned presence in space, at just under ten years. Towards the end of the space station’s life however, the years began to take their toll. There was a dangerous fire, multiple system failures, and a collision with a resupply ship. The Russian commitment to the International Space Station drained funds for repairs, so Mir was allowed to reenter the Earth’s atmosphere and burn up in 2001.

43. “Kama ___” (ancient love guide) : SUTRA
Kama is the Hindu god of love. He is portrayed as a youth bearing a bow and arrows, much like Eros and Cupid.

The Kama Sutra is renowned for its descriptions of positions that can be used for sexual intercourse, but the sutra includes many other texts that deal with various matters of a sexual nature including how to woo a woman, the conduct of a “chief wife”, the conduct of “other” wives, how to make money as a courtesan and much, much more, as if that isn’t enough …

44. Case of the blahs : ENNUI
“Ennui” is the French word for boredom, a word that we now use in English. It’s one of the few French words we’ve imported that we haven’t anglicized and actually pronounce “correctly”.

46. PC hookup : LAN
You may have a Local Area Network (LAN) in your house. If you’ve got a PC and a router or switch, likely attached to some modem, then you have a LAN.

48. “Life of Pi” director Lee : ANG
Taiwanese director Ang Lee sure has directed a mixed bag of films, mixed in terms of genre but not in terms of quality. He was at the helm for such classics as “Sense & Sensibility” (my personal favorite), “Crouching Tiger, Hidden Dragon”, “Hulk”, “Brokeback Mountain” and “Life of Pi”.

The 2012 movie “Life of Pi” is based on a 2001 novel of the same name by Yann Martel. The “Pi” in the title is an Indian boy called Pi Patel who finds himself adrift for 227 days in small boat with a Bengal tiger named Richard Parker.

63. Like some premium roasts : CENTER-CUT
The center-cut of a beef tenderloin is one of three cuts, along with the butt and the tail. The center-cut is used for filet mignon, and also for the dishes Chateaubriand and Beef Wellington.

65. Garlicky sauce : AIOLI
To the purist, especially in Provence in the South of France, the “home” of aioli, aioli is prepared just by grinding garlic with olive oil. However, other ingredients are often added to the mix, particularly egg yolks.

66. Note an alto is unlikely to hit : HIGH C
In choral music, an alto is the second-highest voice in a four-part chorus made up of soprano, contr(alto), tenor and bass. The word “alto” describes the vocal range, that of the deepest female singing-voice, whereas the term “contralto” describes more than just the alto range, but also its quality and timbre. An adult male’s voice (not a boy’s) with the same range as an alto is called a “countertenor”.

Down
2. Carrier to Israel : EL AL
El Al Israel Airlines is the flag carrier of Israel. The term “el al” translates from Hebrew as “to the skies”.

3. Actress Gershon of “Bound” : GINA
Gina Gershon is an American actress. Gershon has played a lesbian on screen a number of times and has become somewhat of a gay icon.

“Bound” is a crime film released in 1996 starring Jennifer Tilly and Gina Gershon as two women who scheme together to steal money from the mob. I saw this film not too long ago, and it had some pretty steamy scenes.

4. ___ Store (source of many 99¢ downloads) : ITUNES
iTunes is a very, very successful software application from Apple. It’s basically a media player that works on platforms like the iPad, iPhone and iPod. Of course it connects seamlessly to the iTunes Store, where you can spend all kinds of money.

8. Ersatz butter : OLEO
Emperor Louis Napoleon III of France announced a competition to develop a substitute for butter, a substitute that would be more accessible to the lower classes and more practical for the armed forces. In 1869, a French chemist called Hippolyte Mege-Mouries came up with something that he called oleomargarine, which was eventually manufactured under the trade name “margarine”. The name “oleomargarine” also gives us our generic term “oleo”.

10. “Nothing ___ net” : BUT
“Nothing but net” is a term used for a “swish” in basketball, a score made when the ball goes into the basket without touching the rim or the backboard.

11. Lump that moves when you swallow : ADAM’S APPLE
The voice box or larynx is where pitch and volume of sound are manipulated when we talk. The structure called the Adam’s apple that protrudes from the human neck is formed by the thyroid cartilage that surrounds the larynx. The Adam’s apple of males tends to increase in size during puberty, so the feature tended to be associated more with males in days gone by, perhaps leading to the name “Adam’s” apple.

12. Distinctive Cindy Crawford feature : MOLE
The supermodel Cindy Crawford has a trademark mole above her upper lip. Early in her career, the mole was airbrushed out of her photographs, including the shot used in her first cover for “Vogue” magazine.

26. Diva’s delivery : ARIA
“Diva” comes to us from Latin via Italian. “Diva” is the feminine form of “divus” meaning “divine one”. The word is used in Italy to mean “goddess” or “fine lady”, and especially is applied to the prima donna in an opera. We often use the term to describe a singer with a big ego.

27. Hooch container : FLASK
In the Klondike gold rush, a favorite tipple of the miners was “Hoochinoo”, a liquor made by the native Alaskans. Soon after “hooch” (also “hootch”) was adopted as a word for cheap whiskey.

28. Any “Seinfeld” showing, now : RERUN
“Seinfeld” aired for nine seasons on NBC, and in 2002 was declared by TV Guide as the “greatest television program of all time”. After the show completed its run in 1998, each of the main supporting actors made failed attempts to launch new sitcoms. This phenomenon became known as “the Seinfeld curse”, but Julia Louis-Dreyfus finally managed to break free of it with a successful five-season run in “The New Adventures of Old Christine”.

33. Onetime Joker portrayer ___ Romero : CESAR
Cesar Romero was an American actor of Cuban descent from New York. He played a wide variety of roles on the big screen, but is remembered by many for playing the Joker on the “Batman” television show from the sixties.

34. Perfect settings : EDENS
According to the Book of Genesis, Adam and Eve lived in a garden “in” Eden, with Eden being geographically located by reference to four rivers including the Tigris and the Euphrates. Some scholars hypothesize that Eden was located in Mesopotamia, which encompasses much of modern-day Iraq.

37. “You said it, brother!” : AMEN!
The word “amen” is translated as “so be it”. “Amen” is said to be of Hebrew origin, but it is likely to be also influenced by Aramaic and Arabic.

54. ___ Park, Colo. : ESTES
Estes Park is a town in a beautiful part of the US, in northern Colorado. Estes Park is home to the headquarters of Rocky Mountain National Park. My fire-fighting brother-in-law was based at that park, so I’ve visited and can attest that it is a gorgeous place to live. He lives in Omaha now. The geography in Omaha is a little different …

60. ___ John Silver : LONG
Long John Silver is a character in Robert Louis Stevenson’s “Treasure Island”, and is a pirate with a peg leg.

61. Title beekeeper in a 1997 film : ULEE
“Ulee’s Gold” is a highly respected film from 1997 in which Peter Fonda plays the title role of Ulee. Ulee’s “gold” is the honey that Ulee produces. It is a favorite role for Peter Fonda and he has shared that playing Ulee brought to mind his father, Henry Fonda, who himself kept a couple of hives. So if you see Peter Fonda in “Ulee’s Gold” you’re witnessing some characteristics that Peter saw in his father.