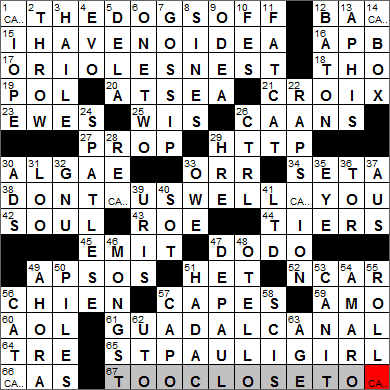 CROSSWORD SETTER: Stu Ockman
THEME: Call … we have a rebus puzzle today, with the word CALL appearing in six squares in the grid. In my solved grid, “CA..” represents CALL:

Today’s Wiki-est, Amazonian Googlies
Across
12. “How to Marry a Millionaire” actress : BACALL
What a bombshell Lauren Bacall was, with that husky voice and her quiet, suggestive manner. Bacall was born in New York City to Jewish immigrant parents from Europe. She is actually a first cousin of Shimon Peres, the President of Israel and former Prime Minister.

16. Police dept. broadcast : APB
An All Points Bulletin (APB) is a broadcast from one US law enforcement agency to another.

17. Suspended avian home : ORIOLE’S NEST
An oriole’s nest is a woven, cup-like structure that is suspended from a branch like a hammock.

20. Bamboozled : AT SEA
It’s thought that the lovely word “bamboozle” came into English from the Scottish “bombaze” meaning “perplex”. We’ve been using “bamboozle” since the very early 1700s.

25. Superior home?: Abbr. : WIS
Wisconsin is named for the Wisconsin River, the longest river in the state. The famous missionary Father Jacques Marquette recorded the Algonquian name for the river as “Meskousing”. This was modified by French explorers to “Ouisconsin”, with the first syllable pronounced just like the French word for “yes” … “oui’. In the early 1800s this was anglicized to “Wisconsin”.

26. Actors James and Scott : CAANS
James Caan is an actor from the Bronx in New York City. Caan is noted for his appearances in some very big movies such as “The Godfather”, “Misery”, “A Bridge Too Far”, “Rollerball” and more recently “Elf”. Caan is quite the sportsman. He plays golf with an 8 handicap, and is a 6-Dan Black Belt Master of Gosoku Karate.

Scott Caan is the actor playing “Danno” on the remake of “Hawaii Five-0”. Scott is the son of Hollywood actor James Caan.

30. Deterrent to swimming : ALGAE
Algae are similar to terrestrial plants in that they use photosynthesis to create sugars from light and carbon dioxide, but they differ in that they have simpler anatomies, and for example lack roots.

33. Three-time N.H.L. M.V.P. : ORR
Bobby Orr is regarded as one of the greatest hockey players of all time. By the time he retired in 1978 he had undergone over a dozen knee surgeries. At 31 years of age, he concluded that he just couldn’t skate anymore. Reportedly, he was even having trouble walking …

43. Sea urchin delicacy : ROE
Sea urchins are globular, spiny creatures found just about everywhere in the ocean. The “roe” of a sea urchin is eaten as a delicacy in several cuisines around the world. The term “roe” normally means “fish eggs”, but in the case of the sea urchin it refers to the gonads of both the male and female.

47. Dimwit : DODO
A dodo is a foolish person, and dodo is word that comes into English from the Portuguese “doudo”. “Doudo” was a slang term used by Portuguese sailors for the extinct bird that we now know as the dodo.

49. Lhasa ___ : APSOS
The Lhasa apso breed of dog originated in Tibet and is named after Lhasa (the capital city) and apso (a Tibetan word meaning “bearded”). The Lhasa apso has been around since 800 BC and is one of the oldest breeds in the world, one very closely related to the ancestral wolf.

52. Biltmore Estate state: Abbr. : N CAR
Biltmore House is a magnificent mansion located near Asheville, North Carolina. It was built by the George Washington Vanderbilt II in the late 1800s. Biltmore is still privately owned, and is the largest privately owned residence in the whole country. The house is now open to the public. My wife and I wanted to visit the estate not too long ago but, to be honest, we decided against it as we found the entrance fee a little steep ($69 per person for a self-guided tour).

60. Owner of Moviefone : AOL
Moviefone is a movie listing service, available by telephone in many parts of the country.

61. Site of W.W. II’s first amphibious landing : GUADALCANAL
Guadalcanal is the largest island in the Solomon Islands in the South-Western Pacific. The island is named after Guadalcanal, a village in Andalusia, Spain which was the home of the explorer who discovered it.

The Italian tricolor is made up of three vertical blocks of green, white and red. The three colors have been said to signify many different things. One interpretation is that the green represents the country’s plains and hills, the white represents the snowy Alps and the red represents blood spilt in the Wars of Italian Independence.

65. Commercial figure holding six beer mugs : ST PAULI GIRL
St. Pauli Girl beer is brewed in Bremen in Germany. The beer gets its name from the former St. Paul’s Monastery in Bremen, next door to which was located the original brewery.

66. Singer known as La Divina : CALLAS
Although Maria Callas was born in New York City, she was educated in music in Greece, and launched her career in Italy. Her marvelous performances earned her the nickname “La Davina”, and she was described by Leonard Bernstein as “the Bible of opera …”

Down
1. Homer’s Muse : CALLIOPE
In Greek mythology, the muses are the goddesses who inspire the creation of literature and the arts. The number of muses is a subject of debate at times, but the most popular view is that there are nine:

Homer was a famous poet of Ancient Greece, believed to be the author of the two classic epic poems, the “Iliad” and the “Odyssey”. However, some scholars believe that Homer did not actually exist, but rather he is the personification of oral tradition that was passed down through the ages.

4. Bolivian president Morales : EVO
Evo Morales has been President of Bolivia since 2006. Morales has a socialist agenda, and as such his government is a close ally to the regimes of Hugo Chavez in Venezuela and Fidel Castro in Cuba.

7. It may be full of dirt : GOSSIP
Our word “gossip” comes from the Old English “godsibb” meaning “godparent”. The term was then used for women friends who attended a birth, and then for anyone engaging in idle talk.

9. Ancient theaters : ODEA
In Ancient Greece an odeon (also odeum) was like a small theater, with “odeon” literally meaning a “building for musical competition”. Odea were used in both Greece and Rome for entertainments such as musical shows and poetry readings.

10. Moroccan city known as the Athens of Africa : FES
Fes (sometimes “Fez”) is the third largest city in Morocco. Fes is home to the Fes el Bali quarter, a walled part of the city that is thought to be the largest car-free urban area in the world. Fes is also gave the name to the red felt hat called a Fez.

22. Rogue : RAPSCALLION
We might call a little imp a rapscallion, an evolution from “rascallion”, which in turn comes from “rascal”.

29. Much of central Eur., once : HRE
The Holy Roman Empire (HRE) existed from 962 to 1806 AD and was a territory of varying size over the centuries that centered on the Kingdom of Germany. The HRE was a successor to the western half of the Ancient Roman Empire.

31. Head overseas : LOO
When I was growing up in Ireland, a “bathroom” was a room that had a bath and no toilet. The separate room with the commode was called “the toilet” or sometimes the W.C. (the water closet). Apparently the term closet was used because in the 1800s when homeowners started installing toilets indoors they often displaced clothes and linens in a “closet”, as a closet was the right size to take the commode. It has been suggested that the British term “loo” comes from Waterloo (water-closet … water-loo), but no one seems to know for sure. Another suggestion is that the term comes from the card game of “lanterloo” in which the pot was called the loo!

In old sailing ships, the toilet area for the regular sailors was located in the forward part (the head) of the ship, hence the term “head” that has been used since then for any toilet on board a boat.

32. Animal whose young is a calf : GNU
A gnu is also known as a wildebeest, an antelope native to Africa. “Wildebeest” is actually the Dutch word for “wild beast”.

40. Inebriate : SOT
Our word “sot” comes from the Old English “sott”, meaning a fool. The word “sot” started to be associated with alcohol and not just foolery in the late 1500s.

41. Ford last produced in 1986 : LTD
There has been a lot of speculation about what the acronym LTD stands for in the car model known as “Ford LTD”. Many say it stands for Luxury Trim Decor, and others that it is an abbreviation for “limited”. Although the car was produced in Australia with the acronym meaning Lincoln Type Design, it seems LTD was originally chosen as just three meaningless letters that sound well together.

47. The Blue Demons of the N.C.A.A. : DEPAUL
DePaul University is a private school in Chicago. It was founded in 1898 and originally named St. Vincent’s College after the French priest Saint Vincent de Paul. The name was changed to DePaul in 1907, at the same time as the school admitted its first female students.

48. Verdi opera : OTELLO
Giuseppe Verdi’s opera “Otello” was first performed in 1887 at La Scala Theater in Milan. The opera is based on Shakespeare’s play “Othello” and is considered by many to be Verdi’s greatest work.

54. Ruben ___, Phillies Gold Glove-winning shortstop : AMARO
Rubén Amaro, Sr. was a professional baseball player who played infield from 1958 to 1969 in Major League Baseball. Rubén’s father was from Cuba and played in the Mexican League. Rubén’s son Rubén Amaro, Jr. played outfielder in the Majors and is now the GM of the Philadelphia Phillies.