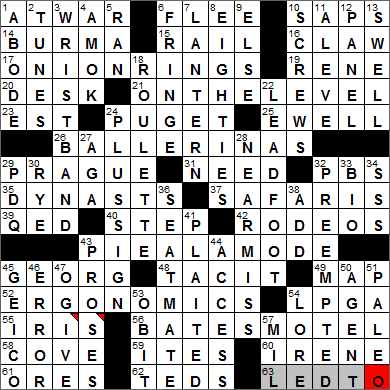 Today’s Wiki-est, Amazonian Googlies
Across
6. Amscray : FLEE
Pig Latin is in effect a game. One takes the first consonant of an English word and moves it to the end of the word, and then adds the letters “ay”. So the Pig Latin for the word “nix” is “ix-n-ay” … ixnay, and for “scram” is “am-scr-ay”

14. ___ Road (W.W. II supply route) : BURMA
The Burma Road is 717 mile long route that links Burma/Myanmar to southwest China. It was built in 1937/38 and played a crucial role during WWII. At the beginning of the conflict it was used by the British to supply China who were fighting the Japanese. The road was controlled by the Japanese after they overran Burma.

19. Unisex name meaning “born again” : RENE
“René” and “Renée” are French for the adjective “reborn”, when applied to masculine and feminine nouns.

24. Sound name : PUGET
Tacoma is a city on Puget Sound in the state of Washington. The city took its name from Mount Rainier that is nearby, as the peak used to be known as Mount Tahoma.

25. Tom who won a Tony for “The Seven Year Itch” : EWELL
The actor Tom Ewell is best remembered for playing the male lead in the “The Seven Year Itch”, both on the Broadway stage and in the 1955 Hollywood movie. I also know Ewell as the “bad guy” in one of my favorite movies, 1949’s “Adam’s Rib”.

“The Seven Year Itch” is a 1955 movie by Billy Wilder, based on a stage play of the same name by George Axelrod. “The Seven Year Itch” stars Marilyn Monroe, and Tom Ewell as the guy with “the itch”. Perhaps the most famous scene in the film is the one with Monroe standing over a subway grate allowing the updraft to billow the skirt of her white dress above her knees. The manoeuvre was meant to cool her down, but I think it had the opposite effect on some in the audience! The phrase “seven year itch” had been used by psychologists to describe declining interest in staying monogamous after seven years of marriage.

29. The City of a Hundred Spires : PRAGUE
The beautiful city of Prague is today the capital of the Czech Republic. Prague’s prominence in Europe has come and gone over the centuries. For many years it was the capital city of the Holy Roman Empire. A 19th-century mathematician made a count of the spires within the bounds of the city, leading to Prague getting the nickname “City of a Hundred Spires”. A more recent estimate is that there are actually about 500 spires now

31. Triage determination : NEED
“Triage” is the process of prioritizing patients for treatment, especially on a battlefield. The term “triage” is French and means “a sorting”.

32. Home of “NerdTV” : PBS
“NerdTV” is a technology television show produced by PBS that airs on the Internet, rather than over the airways. The show features interviews of famous and influential nerds.

35. Line of rulers : DYNASTS
A “dynast” is someone who rules by virtue of heredity.

39. Argument-ending letters : QED
QED is used at the end of a mathematical proof or a philosophical argument. The QED acronym stands for the Latin “quod erat demonstrandum” meaning “that which was to be demonstrated”.

42. Occasions for bulldogging : RODEOS
“Rodeo” is a Spanish word, which is usually translated as “round up”.

Steer wrestling, also called bulldogging, is an event at a rodeo in which a rider on a horse chases down a steer. The rider jumps down from the horse and wrestles the steer to the ground by twisting its horns. The event isn’t a big hit with animal rights groups.

43. Hot-and-cold menu item : PIE A LA MODE
In French, “à la mode” simply means “fashionable”. In America, the term has come to describe a way of serving pie, usually with ice cream, or as I recall from when I lived in Upstate New York, with cheese.

54. Kraft Nabisco Championship org. : LPGA
The Ladies Professional Golf Association (LPGA) was founded in 1950 by a group of 13 lady golfers, and today it is the oldest ongoing women’s sports professional organization in the US.

56. Classic Hitchcock set : BATES MOTEL
Bates Motel and house were constructed on the backlot of Universal Studios for the 1960 HItchcock movie “Psycho”. They are still standing, and for me are the highlight of the backlot tour that is available to visitors.

60. Rich of old films : IRENE
The actress Irene Rich worked in movies during the transition from the silent era to talkies. Rich also did a lot of work on radio where she had her own show. “The Irene Rich Show” was a series of mini-dramas in which Rich played opposite her leading man, Gale Gordon, who later played “Mr. Mooney”, Lucille Ball’s boss on “The Lucy Show”.

Down
1. Flat, e.g. : ABODE
“Flat” is a word more commonly used in the British Isles than here. A flat is basically an apartment or condominium. The word “flat” is Scottish in origin, in which language it meant a “floor in a house”.

5. With 4-Down, lost control : RAN
(4D. See 5-Down : AMOK)
The phrase “to run amok” (sometimes “to run amuck”) has been around since the 1670s and is derived from the Malay word for “attacking furiously”, “amuk”. The word “amok” was also used as a noun to describe Malay natives who were “frenzied”. Given Malaya’s troubled history, the natives probably had good reason for that frenzy …

8. Reagan was seen a lot in them : EIGHTIES
Ronald Reagan started out his political career as a member of the Democratic Party, but switched to the Republicans in the early fifties. He served as Governor of California for eight years, and vied unsuccessfully for the nomination for US President on two occasions. He finally succeeded in 1980 and defeated President Jimmy Carter to become the 40th US President in 1981.

18. Kind of wheel : ROULETTE
The name “roulette” means “little wheel” in French, and the game as we know it today did in fact originate in Paris, in 1796.

27. One of the Eastern elite : AGA
“Aga” (also “agha”) is a title that was used by both civil and military officials in the Ottoman Empire.

34. Nemesis of some dodgers: Abbr. : SSS
The US government maintains information on all males who are potentially subject to military conscription, using what is called the Selective Service System (SSS). In the event that a draft was held, men registered would be classified into groups to determine eligibility for service. Class 1-A registrants are those available for unrestricted military service. Other classes are 1-A-O (conscientious objector available for noncombatant service), 4-A (registrant who has completed military service) and 4-D (Minister of religion).

43. Talks tediously : PROSES
“To prose” is to speak or write in dull style.

45. American company whose mascot has a Cockney accent : GEICO
GEICO was founded in 1936 with a very specific mission, to provide auto insurance for employees of the federal government and their families, hence the name Government Employees Insurance Company (GEICO). GEICO is a private company, despite the word “government” in its name. The founders’ idea was to focus on government employees as they believed such a group represented a lower risk profile than the rest of the population. Nowadays any qualifying person can take out a policy with GEICO.

46. Diamond flaw : ERROR
A baseball player might make an error on the baseball diamond.

47. Diagonal rib of a vault : OGIVE
An ogive is rounded, tapered end of an object. A classic ogive is the tip of a bullet or a rocket. The ogival or pointed arch is a defining feature in Gothic architecture.

53. Exit lines? : OBIT
“Obituary” comes from the Latin “obituaris”, originally the record of the death of a person, although the literal meaning is “pertaining to death”.

54. Ethnologist’s interest : LORE
An ethnologist is a scientist who compares and studies human cultures.

57. 254,000 angstroms : MIL
The angstrom is a very small unit of length, equal to one ten-billionth of a meter. As such a small unit, the angstrom is used to measure the size of atoms and molecules. The unit is named for the Swedish physicist Anders Jonas Ångström.