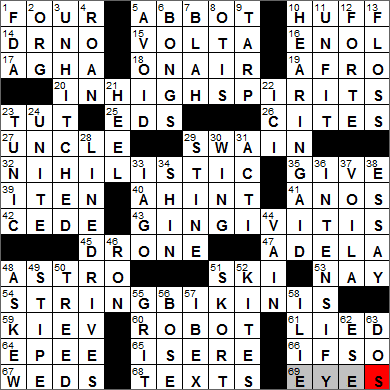 1A. With 69-Across, childish taunt … and a homophonic hint to the answers to the asterisked clues : FOUR
69A. See 1-Across : EYES

20A. *Elated : IN HIGH SPIRITS
32A. *Believing in nothing : NIHILISTIC
43A. *Inflammation of gum tissue : GINGIVITIS
54A. *Eensy-weensy beach garments : STRING BIKINIS

Today’s Wiki-est, Amazonian Googlies
Across
14. First James Bond movie : DR NO
“Dr. No” may have been the first film in the wildly successful James Bond franchise, but it was the sixth novel in the series of books penned by Ian Fleming. Fleming was inspired to write the story after reading the Fu Manchu tales by Sax Rohmer. If you’ve read the Rohmer books or seen the films, you’ll recognize the similarities between the characters Dr. No and Fu Manchu.

15. Italian scientist after whom an electrical unit is named : VOLTA
Alessandro Volta was the physicist who invented the first battery, way back in 1800. One of Volta’s first applications of his new invention was to use a battery (and a very long run of wire between the Italian cities of Como and Milan) to shoot off a pistol from 30 miles away!

16. Carbon compound : ENOL
An enol is an alkene with a hydroxyl group, sort of part-alkene and part-alcohol. The term “enol” therefore, is a portmanteau of “alkene” and “alcohol”.

17. Turkish honorific : AGHA
“Aga” (also “agha”) is a title that was used by both civil and military officials in the Ottoman Empire.

23. Egyptian boy king : TUT
King Tut is a name commonly used for the Egyptian pharaoh Tutankhamen. Tutankhamen may not have been the most significant of the pharaohs historically, but he is the most famous today largely because of the discovery of his nearly intact tomb in 1922. Prior to this find, any Egyptian tombs uncovered by archaeologists had been ravaged by grave robbers. Tutankhamen’s magnificent burial mask is one of the most recognizable of all Egyptian artifacts.

27. “I give!” : UNCLE
To “say uncle” is an American expression meaning to submit or yield. Its usage dates back to the early 1900s, but nobody seems to know how “uncle!” came to mean “stop!”

29. One who goes a-courting : SWAIN
A swain is a country lad, or a beau. Back in the 12th century a swain was a young man who attended a knight.

32. *Believing in nothing : NIHILISTIC
“Nihil” is the Latin word for “nothing, and is a term we’ve absorbed into English. “Nihil” is also the root from which we get our term “nil”. Someone described as “nihilistic” is very skeptical and tends to believe in nothing.

39. Major Fla.-to-Calif. route : I-TEN
I-10 is the most southerly of the interstate routes that crosses from the Atlantic to the Pacific. I-10 stretches from Santa Monica, California to Jacksonville, Florida.

41. Spanish years : ANOS
In Spanish, we start years (años) in January (enero) as noted on a calendar (calendrio).

47. Journalist ___ Rogers St. Johns : ADELA
Adela Rogers St. Johns was a journalist, novelist and screenwriter from Los Angeles. St. Johns’ father was a good friend of William Randolph Hearst, and she secured her first job working for Hearst as a reporter on the “San Francisco Examiner”. St. Johns’ was most famous as what was then called a “girl reporter”, in the twenties and thirties. Much later in her life, she was a regular guest on the “Tonight Show” hosted by Jack Paar.

48. Houston baseballer : ASTRO
The Houston baseball team changed its name to the Astros from the Colt .45s in 1965 when they started playing in the Astrodome. The Astrodome was so called in recognition of the city’s long association with the US space program.

59. Chicken ___ (dish) : KIEV
Chicken Kiev may indeed be a Ukrainian dish, named for the capital city of Kiev. It is a boneless chicken breast rolled around garlic, herbs and butter, breaded and deep fried. It was my Dad’s favorite …

60. Man of steel? : ROBOT
“R.U.R.” is a play written in Czech by Karel Capek, first produced in 1921. “R.U.R.” is a science fiction work and is remembered in part for introducing the world to the word “robot”. The words “automaton” and “android” were already in use, but Capek gave us “robot” from the original Czech “robota” meaning “forced labor”.

64. Olympic sword : EPEE
The French word for sword is “épée”. In competitive fencing the épée is connected to a system that records an electrical signal when legal contact is made on an opponent’s body.

65. France’s Val d’___ : ISERE
Val d’Isère is a noted ski resort in south-eastern France, lying just 3 miles from the Italian border. If you’ve ever watched the British sitcom “Absolutely Fabulous”, Edina and Patsy used to holiday in Val d’Isère whenever they got they chance.

4. Horse with more than one color : ROAN
A roan horse has an even mixture of white and colored hairs on the body with the head, lower legs, mane and tail having a more solid color.

6. Water pipes : BONGS
A “bong” is a smaller and more portable version of a “hookah”, with both being filtration devices for smoking especially tobacco and cannabis. The term “bong” comes from the Thai word “baung” that is used for a wooden pope cut from bamboo.

8. “Miss ___ Regrets” : OTIS
“Miss Otis Regrets” is a Cole Porter composition written in 1934 that is usually sung in a blues style. Porter wrote the song as a friendly bet. He had boasted that he could write a song about any subject, so the challenge from some friends was to create something using the next words they should hear. Porter and friends were at lunch in a restaurant, and they heard a waiter at an adjoining table say “Miss Otis regrets she’s unable to lunch today”. And that became a classic song …

9. Covering pulled out during a rain delay : TARP
Originally, tarpaulins were made from canvas covered in tar that rendered the material waterproof. The word “tarpaulin” comes from “tar” and “palling”, with “pall” meaning “heavy cloth covering”.

12. Talent : FORTE
Our word “forte” meaning “strength, talent” comes to us via French. The French word “fort” meaning “strong” was used as a noun for the “string point of a sword”. We then started using it to mean the “strong point of a person” in the late 1600s.

13. Dental thread : FLOSS
Dental floss has been around a long time, with the term “dental floss” being introduced in the early 1800s. Anyone fond of the writings of James Joyce (that wouldn’t be me!) might recall a character using dental floss in his famous novel “Ulysses” that was published between 1918 and 1920.

21. Part of a shoe with a tap : HEEL
Tap shoes (for tap-dancing) have metal taps at the heels and the toes.

23. Old Greek garment : TUNIC
Our word “tunic” comes from the Roman name for the garment “tunica”. The Ancient Roman garment itself was based on an item of clothing worn by the Ancient Greeks called a “chiton”. Back then in Greece it was common for the hemline of someone’s tunic to be decorated with a pattern that identified the city-state in which the individual lived.

29. Children’s author R. L. ___ : STINE
The author R. L. Stine is sometimes referred to as the Stephen King of children’s literature as he writes horror stories for young people.

33. “O, beware, my lord, of jealousy” speaker : IAGO
Iago is the schemer in Shakespeare’s “Othello”. Iago is a soldier who fought alongside Othello and feels hard done by, missing out on promotion. He hatches a plot designed to discredit his rival Cassio by insinuating that Cassio is having an affair with Desdemona, Othello’s wife. By the end of the play it’s Iago himself who is discredited and Othello (before committing suicide) apologizes to Cassio for having believed Iago’s lies. Heavy stuff …

34. Lower part of the leg : SHIN
The tibia is the shin bone, the larger of the two bones right below the knee. The tibia is the strongest weight-bearing bone in the human body. “Tibia” is the Roman name for a Greek flute and it is thought that the shin bone was given the same name because flutes were often fashioned out of the shin bones of animals.

46. Politico Paul : RON
Ron Paul is a celebrated Republican Congressman from Texas. Paul is a libertarian, and actually ran for president in 1988 as a Libertarian Party candidate. He ran for the Republican nomination for President in 2008 as a member of the Liberty Caucus of the party, meaning that he values a federal government that is limited in size and scope.

R.E.M. was a rock band from Athens, Georgia formed in 1980. The name “R.E.M.” was chosen randomly from a dictionary, apparently.

50. Cornered, as a raccoon : TREED
The raccoon is native to North America. In captivity, raccoons can live to over 20 years of age, but in the wild they only live two or three years. The main causes for the shorter lifespan are hunting and road traffic.

51. Women’s hybrid tennis garment : SKORT
Skorts are a hybrid between shorts and a skirt.

56. Audio equipment giant : BOSE
Bose Corporation was founded in 1964 by Amar G. Bose, and is a company that specializes in manufacture of audio equipment.

57. Alpine goat : IBEX
Ibex is a common name for various species of mountain goat. “Ibex” is a Latin name that was used for wild goats found in the Alps and Apennines in Europe.

58. Tennis’s Nastase : ILIE
I think that Ilie Nastase was the most entertaining tennis player of the 1970s, the days of Jimmy Connors, Bjorn Borg and John McEnroe. No matter how much pressure there was in a match, Nastase always had time to give the crowd a laugh.