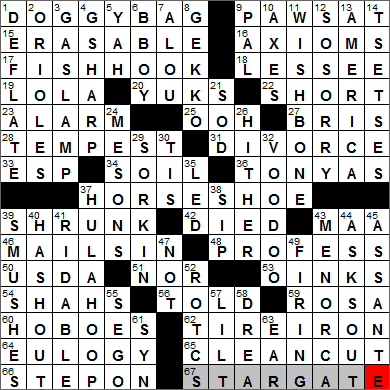 CROSSWORD SETTER: Daniel A. Finan
THEME: Shaped Like a Letter … each of today’s themed answers is shaped like the letter given in the clue:

Today’s Wiki-est, Amazonian Googlies
Across
16. Saws : AXIOMS
A “saw” is an old adage, a saying.

19. Transvestite of song : LOLA
“Lola” is a fabulous song, written by Ray Davies and released by the Kinks back in 1970. Inspired by a real life incident, the lyrics tell of young man who met a young “lady” in a club, danced with her, and then discovered “she” was actually a transvestite. The storyline isn’t very traditional, but the music is superb.

22. Third neighbor? : SHORT
In baseball, third base is right next to shortstop.

27. Eighth-day rite : BRIS
A mohel is a man who has been trained in the practice of brit milah (circumcision). Brit milah is known as “bris” in Yiddish. The brit milah ceremony is performed on male infants when they are 8-days old.

28. Source of the phrase “brave new world,” with “The” : TEMPEST
William Shakespeare’s “The Tempest” tells the story of Prospero, who was removed from the throne of Milan and banished to a deserted island along with his daughter Miranda. Prospero learns sorcery while castaway, and eventually conjures up a tempest that drives those who usurped his throne onto the island’s shores (in particular his own brother, Antonio). On the island, Prospero is eventually successful in revealing Antonio’s lowly nature.

There is a speech by Miranda in “The Tempest” by William Shakespeare that is the source for the title of “Brave New World” by Aldous Huxley:

36. Skater Harding and others : TONYAS
Tonya Harding won the US Figure Skating Championships in 1991. Harding’s reputation was greatly tarnished in the run up to the 1994 Olympics, when her former husband and her bodyguard contracted someone to attack Harding’s main competitor, Nancy Kerrigan. During a practice session for the US Championship, a hired thug assaulted Kerrigan with police baton, attempting to break her leg. Kerrigan was forced to withdraw, and Harding won the championship. Both Harding and Kerrigan were selected for the Olympic team, and despite attempts to get Harding removed, both skated at the Games in Lillehammer. Harding finished in eighth place, and Kerrigan won the silver medal. Harding admitted that she helped cover up the attack when she found out about it, and was stripped of her US Championship title.

46. Does perfunctorily, as a performance : MAILS IN
“To mail in” a performance is just get the job done, to just say the words without really being “present”.

50. Letters on a stamp : USDA
The US Department of Agriculture (USDA) classifies meat into eight different grades:

51. Scand. land : NOR
Norway has been ranked as the country in the world with the highest standard of living almost every year since 2001. Norway is rich in natural resources and has a relatively low population. The people benefit from a comprehensive social security system, subsidized higher education for all citizens and universal health care.

53. Parts of an “Old MacDonald” verse : OINKS
There was an American version of the English children’s song “Old MacDonald Had a Farm” (E-I-E-I-O), that was around in the days of WWI. The first line of the US version goes “Old MacDougal had a farm, in Ohio-i-o”.

59. Parks in a bus : ROSA
Rosa Parks was one of a few brave women in days gone by who refused to give up her seat on a bus to a white woman. It was the stand taken by Rosa Parks on December 1, 1955 that sparked the Montgomery, Alabama Bus Boycott. President Clinton presented Ms. Parks with the Presidential Medal of Freedom in 1996. When she died in 2005, Rosa Parks became the first ever woman to have her body lie in honor in the US Capital Rotunda.

60. Beggars of a sort : HOBOES
No one seems to know for sure how the term “hobo” originated, although there are lots of colorful theories. My favorite is that “hobo” comes from the first letters in the words “ho-meward bo-und”, but it doesn’t seem very plausible. A kind blog reader tells me that according to Click and Clack from PBS’s “Car Talk” (a great source!), “hobo” comes from “hoe boy”. Hoe boys were young men with hoes looking for work after the Civil War. Hobos differed from “tramps” and “bums”, in that “bums” refused to work, “tramps” worked when they had to, while “hobos” traveled in search of work.

64. Gettysburg Address, e.g. : EULOGY
I visited Gettysburg for the first time in 2010, and goodness me what a moving place that is. As I discovered on my visit, there are five known copies of Lincoln’s Gettysburg address and all of them differ in some way or another, so I suppose the exact words spoken will never be known. Martin Luther King Jr. evoked Abraham Lincoln’s words in another of America’s iconic addresses, his “I Have a Dream” speech. Lincoln’s speech began with “Four score and seven years ago …”, and King’s speech began with “Five score years ago …” as a nod to the Gettysburg Address.

67. 1994 film that spawned a TV series : STARGATE
The “Stargate” movie, released in 1994, was a really fun film I thought. It turned into huge television, book and video game franchise, but nothing really met the standard of the original, in my humble opinion …

Down
2. Division rivals of the Rays : ORIOLES
The Baltimore Orioles was one of the eight charter teams of MLB’s American League, so the franchise dates back to 1901. Prior to 1901, the team has roots in the Minor League Milwaukee Brewers, and indeed entered the American League as the Brewers. In 1902 the Brewers moved to St. Louis and became the Browns. The team didn’t fare well in St. Louis, so when it finally relocated to Baltimore in the early fifties the team changed its name completely, to the Baltimore Orioles. The owners so badly wanted a fresh start that they traded 17 old Browns players with the New York Yankees. The trade didn’t help the team’s performance on the field in those early days, but it did help distance the new team from its past.

The Tampa Bay Rays is a relatively “young” franchise, being formed in 1998. The initial name of the franchise was the Tampa Bay Devil Rays. and while known as the Devil Rays the team finished last in the league in almost every year. The name was changed to the Tampa Bay Rays in 2008, and I am told the Rays started into a streak of winning seasons soon after.

6. Hip-hop devotee, in old slang : B-BOY
A b-boy is a male fan of rap-music and breakdancing. Apparently the term comes from either “Bronx boy” or “break boy”.

7. Baseball’s Felipe : ALOU
Felipe Alou is a former professional baseball player and manager. Alou managed the Montreal Expos from 1992 to 2001, and the San Francisco Giants from 2003 to 2006. Alou was born and raised in the Dominican Republic and came to the US to play for the Giants in 1955. Felipe’s brothers Matty and Jesús followed him to the US, and into Major League baseball.

8. Gordon ___, “Wall Street” character : GEKKO
The business strategy known as “corporate raiding” really is pretty ruthless and short sighted (excuse my being judgmental). The idea is to buy a large interest in a corporation, sometimes “stealthily”, by buying up a significant number of voting shares. Then, the raider uses the power of the voting rights to convince other voters to change the way the company is run, purely to increase the share price in the relatively short term. The changes often involve replacement of the management team, downsizing and even liquidation of the company, all for short term, personal gain. Corporate raider, Gordon Gekko said in the 1987 movie “Wall Street”, “greed is good”, but I wonder is he right?

14. Trypanosomiasis transmitters : TSETSES
Tsetse flies live on the blood of vertebrate mammals. The name “tsetse” comes from Tswana, a language of southern Africa, and translates simply as “fly”. Tsetse flies are famous for being carriers of the disease known as “sleeping sickness”. Sleeping sickness is caused by a parasite which is passed onto humans when the tsetse fly bites into human skin tissue. If one considers all the diseases transmitted by the insect, then the tsetse fly is responsible for a staggering quarter of a million deaths each year.

The tsetse is also responsible for transmission of trypanosomiasis, a disease caused by a parasitic protozoan.

24. Accelerator particles : MESONS
A meson is an unstable subatomic particle, made up of one quark and one antiquark.

29. Oscar-winning screenwriter for “The Social Network” : SORKIN
The wonderful screenwriter Aaron Sorkin got his big break when his stage play “A Few Good Men” was picked up by a Hollywood producer. Since then Sorkin has written great films including “The American President”, “The Social Network”, “Charlie Wilson’s War”, “Moneyball” and the excellent “The West Wing” television series. There is a new television show of his showing on HBO these days that is getting good reviews called “The Newsroom”.

If you’ve seen the movie “The Social Network”, you’ll know that Facebook started off as “Facemash”, a site created by Mark Zuckerberg while he was attending Harvard. Facemash became “Thefacebook” and membership was opened to students beyond Harvard, initially including Ivy League schools and then most colleges across North America.

30. “___ the last rose of summer” (Thomas Moore poem starter) : ‘TIS
Thomas Moore was an Irish poet and songwriter, best known for writing the lyrics of “The Minstrel Boy” and “The Last Rose of Summer”.

32. Activity with dolls : VOODOO
Voodoo is a religion that originated in the French slave colony of Saint-Domingue on the Caribbean island of Hispaniola.

43. Mediterranean resort island, to locals : MENORCA
The island of Minorca in the Mediterranean takes its name from the larger neighboring island of Majorca. The names come from the Latin “Insula Minor” meaning “Minor Island” and “Insula Major” meaning “Major Island”. The island is known as “Minorca” in English, and “Menorca” in Spanish and Catalan.

45. Armand of “Private Benjamin” : ASSANTE
Armand Assante is an actor from New York City, the son of an Italian father and an Irish mother. Despite being an American, Assante is noted for playing non-Americans in movies. He played a Frenchman in 1980’s “Private Benjamin” and a Cuban bandleader in 1992’s “The Mambo Kings”.

“Private Benjamin” is an entertaining comedy movie that features Goldie Hawn in the title role. Private Benjamin is a new recruit in the US Army who joins under a misapprehension about the army lifestyle. She gets a rude awakening, and hilarity ensues …

52. Strenuous college programs, for short : ROTCS
The Reserve Officers’ Training Corps (ROTC) is a training program for officers based in colleges all around the US. The ROTC program was established in 1862 when as a condition of receiving a land-grant to create colleges, the federal government required that military tactics be part of a new school’s curriculum.

55. ___ lily : SEGO
The Sego Lily is the state flower of Utah, and is a perennial plant found throughout the Western United States.

58. “The Sopranos” actress ___ de Matteo : DREA
Drea de Matteo is an actress who is most familiar to me for playing Adriana la Cerva on HBO’s wonderful series “The Sopranos”. She also played Joey’s sister on the short-lived “Friends” spin-off called “Joey”, and the character Angie Bolen on “Desperate Housewives”.

63. Location of the tragus : EAR
The tragus is that small triangular flap that points rearwards at the center of the ear canal in the outer ear.