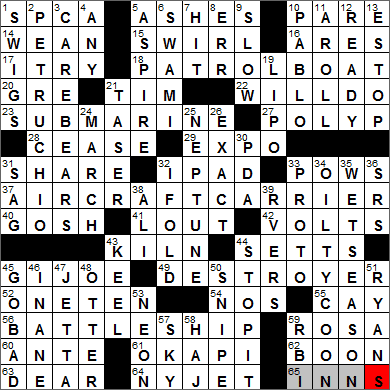 CROSSWORD SETTER: Joel Fagliano
THEME: Battleship … today’s themed answers tell us how many squares are occupied each of four different vessels in a game of Battleship:

Today’s Wiki-est, Amazonian Googlies
Across
1. Pet adoption org. : SPCA
Unlike in most developed countries, there is no “umbrella” organization in the US with the goal of preventing cruelty to animals. Instead there are independent organizations set up all over the nation using the name SPCA. Having said that, there is an organization called the American Society for the Prevention of Cruelty to Animals (ASPCA) that was originally intended to operate across the country, but really it now focuses its efforts in New York City.

16. God whose name is a homophone of a zodiac sign : ARES
The Greek god Ares is often referred to as the Olympian god of warfare, but originally he was regarded as the god of blood-lust and slaughter. Ares united with Aphrodite to create several gods, including Phobos, Deimos and Eros. The Roman equivalent to Ares was Mars.

Aries the Ram is the first astrological sign in the Zodiac, and is named after the constellation. Your birth sign is Aries if you were born between March 21 and April 20, but if you are an Aries you would know that!

20. Test for Ph.D. seekers : GRE
Passing the Graduate Record Examination (GRE) is usually a requirement for entry into graduate school here in the US.

27. Coral producer : POLYP
Polyps are tiny sea creatures that are found attached to underwater structures or to other polyps. Polyps have a mouth at one end of a cylindrical “body” that is surrounded by tentacles. Some polyps cluster into groups called stony corals, with stony corals being the building blocks of coral reefs. The structure of the reef is provided by calcium carbonate exoskeletons secreted by the coral polyps.

31. Facebook button : SHARE
I recently started a Facebook page for this blog. There is “like” button is at the top-right of each page of the NYTCrossword.com blog. Any Facebook users who press this “like” button receive a Facebook message each day a couple of minutes after I post my solution. The message includes direct links to that day’s crossword solution (including the syndicated puzzle), as well as links directly to the prior day’s puzzles.

32. Jobs announcement of 2010 : IPAD
Steve Jobs certainly was a business icon in Silicon Valley. I don’t think it is too surprising to learn that the brilliant Jobs didn’t even finish his college education, dropping out of Reed College in Oregon after only one semester. Steve Jobs co-founded Apple in 1976, but in 1985 he was basically fired from his own company during the computer sales slump of the mid-eighties. Jobs then founded NeXT Computer, a company focused on supplying workstations to the higher education and business markets. Apple purchased NeXT in 1996, and that’s how Jobs found himself back with his original company.

33. John McCain and Kurt Vonnegut, once, for short : POWS
John McCain went into the US Naval Academy in 1958, following a family tradition as his father and grandfather were both four-star admirals. The younger McCain did not achieve the same rank, retiring from the Navy as a captain in 1981, but his career development was interrupted by almost six years spent as a prisoner of war in North Vietnam.

Kurt Vonnegut was an writer from Indianapolis whose most famous work is probably the novel “Slaughterhouse-Five” from 1969. The inspiration for the book was the time he spent in the US Army in WWII. After being captured during the Battle of the Bulge, Vonnegut was held as a prisoner of war in Dresden. Many of his fellow prisoners were killed during the 1945 firebombing of Dresden, but he and others survived by sheltering in an underground meat locker that had been converted to a detention facility. The Germans called the meat locker “Schlachthof Fünf”, which translates to “Slaughterhouse Five”.

42. Battery units : VOLTS
Alessandro Volta was the physicist who invented the first battery, way back in 1800. One of Volta’s first applications of his new invention was to use a battery (and a very long run of wire between the Italian cities of Como and Milan) to shoot off a pistol from 30 miles away! Our term “voltage” comes from the name “Volta”.

44. Small paving stones : SETTS
A sett is a small rectangular paving stone with a rounded top used to make a road surface. It’s like a cobblestone, I think …

45. Foe of Cobra, in comics : GI JOE
G.I. Joe was the original “action figure”, the first toy to carry that description. G.I. Joe first hit the shelves in 1964. There have been a few movies based on the G.I. Joe figure, but, more famous than all of them I would say is the 1997 movie “G.I. Jane” starring Demi Moore in the title role. I think this movie had some potential, to be honest, but it really did not deliver at all.

55. Low island : CAY
A “key” (also “cay”) is a low island offshore, as in the Florida Keys. Our term in English comes from the Spanish “cayo” meaning “shoal, reef”.

56. Four units, in 56-Across : BATTLESHIP
Battleship was a game that we used to play as kids using pencil and paper. The game had been around at least since WWI, and was eventually turned into a board game by Milton Bradley in 1967.

59. Santa ___, Calif. : ROSA
Santa Rosa is the largest city in California’s Wine Country, and the county seat of Sonoma County. The epicenter of the so-called 1906 San Francisco Earthquake was located near Santa Rosa, so there was actually more damage in Santa Rosa, for the size of the city, than there was in San Francisco.

61. Relative of a giraffe : OKAPI
The okapi is closely related to the giraffe, although it does have markings on its legs and haunches that resemble those of a zebra. The okapi’s tongue is long enough to reach back and wash its eyeballs, and can go back even further to clean its ears inside and out.

64. MetLife Stadium athlete, for short : NY JET
Just like the New York Giants, the New York Jets are based in New Jersey, headquartered in Florham Park. The Jets and the Giants have a unique arrangement in the NFL in that the two teams share Metlife Stadium in East Rutherford, New Jersey. The Jets were an AFL charter team, formed in 1959 as the Titans of New York. The Titans changed their name to the Jets in 1963.

Down
2. Kate’s groom in “The Taming of the Shrew” : PETRUCHIO
William Shakespeare’s “The Taming of the Shrew” is about a courting couple. The male is Petruchio, a gentleman of Verona, and the female is Katharina, the so-called “shrew”. As the play progresses, the “shrew” is “tamed” and becomes an “obedient” bride … a controversial storyline in the contemporary world, to say the least. Regardless, modern adaptations have been made, including 1948’s Broadway musical “Kiss Me Kate” and the 1999 romantic comedy “10 Things I Hate About You”.

3. 1980s toy craze : CARE BEARS
Care Bears were a fad toy in the eighties. Care Bears were originally characters in greeting cards introduced in 1981, and became a fad in 1983 when the first Care Bear teddy bears were produced. Then ensued TV shows a nad feature movies.

6. Hindu teacher : SWAMI
A swami is a religious teacher in the Hindu tradition.

13. Legally prohibit : ESTOP
The legal term “estop” means to block or stop by using some legal device. The word “estop” comes from Old French, in which “estopper” means “to stop up” or “to impede”.

19. Plan for losers, informally? : LIPO
Liposuction dates back to the 1920s when it was developed by a surgeon in France. However, the procedure quickly lost favor when a French model developed gangrene after surgery. As a result it wasn’t until the mid-seventies that modern liposuction took off, after being popularized by two Italian-American surgeons in Rome.

21. Stun gun : TASER
Victor Appleton wrote a novel for young adults called “Tom Swift and His Electric Rifle”. The company that developed the TASER electroshock weapon named its product as a homage to the novel. The acronym TASER stands for “Thomas A. Swift’s Electric Rifle”. Interesting, eh?

24. It was originally first on the Roman calendar : MARCH
In the ancient Roman calendar, the year started with the month called “Martius”, which was named for the god Mars. The term “Martius” evolved into our “March”. Back then there were only ten months in the year. “Ianuarius” (January) and “Februarius” were then added as the eleventh and twelfth months of the year, although soon after the year was reset and January and February became the first and second months.

30. Kissing in a crowd, e.g., in brief : PDA
PDA is an acronym used for “public display of affection”.

34. One whose success is well-earned? : OIL TYCOON
Our term “tycoon” meaning powerful business person was originally used by foreigners to describe the shogun of Japan. “Tycoon” was an anglicization of the Japanese “taikun” meaning “great lord or prince”.

38. Who said “It’s not bragging if you can back it up” : ALI
Cassius Marcellus Clay, Jr. was born in 1942 in Louisville, Kentucky. Clay changed his name to Muhammad Ali when he converted to Islam in 1964. Who can forget Muhammad Ali lighting the Olympic flame for the 1996 games in Atlanta? Ali was presented with a gold medal during those ’96 Games, a replacement for the medal he won at the 1960 Olympics. He had thrown the original into the Ohio River as a gesture of disgust after being refused service at a “whites only” restaurant.

50. Bid at the last second, as on eBay : SNIPE
Auction sniping is a relatively new phenomenon, a phenomenon that is associated with online auctions. A sniper waits until the final seconds of an auction and drops in a slightly higher bid, winning the auction as other bidders have no time to respond. Auction sniping is often executed with the help of a software application, or by using an online service.

51. Meg and Paul : RYANS
Meg Ryan is the stage name of the actress Margaret Mary Hyra. Ryan’s big break came with the excellent 1989 movie “When Harry Met Sally” from which she went on to star in some of the greatest romantic comedies ever made.

Paul Ryan was the Republican nominee for Vice President in the 2012 election, on the ticket with Mitt Romney. Off the political stage, Ryan is famous for his fitness regime. He has shared that much of his motivation to work out and to watch his diet is because there is a history of heart attacks at an early age in his family.

58. Pilgrimage to Mecca : HAJ
A Haji (also “Hajji”) is the term used for someone who has made a pilgrimage to Mecca, and it is sometimes also used as a form of address for such a person. The journey itself goes by the name “haj” or “hajj”.