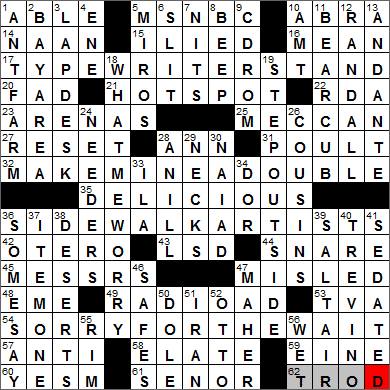 CROSSWORD SETTER: Ed Sessa
THEME: None
BILL BUTLER’S COMPLETION TIME: Did not finish!
ANSWERS I MISSED: Too, too many …

John Steinbeck considered “East of Eden” his magnus opus. Most of the storyline takes place near Salinas, just south of where I live here in the Bay Area. Two of the characters in the story are brothers Cal and Aron, representative of the biblical Cain and Abel.

14. Vindaloo accompaniment : NAAN
“Vindaloo” is a very spicy Indian dish, and one of my favorites.

In an Indian restaurant, naan bread is very popular. Naan is traditionally baked in a clay oven known as a tandoor.

17. Brother’s keeper? : TYPEWRITER STAND
Brother is a Japanese company that is perhaps best known in North America for producing typewriters and printers. Brother started out as a manufacturer of sewing machines in in Nagoya, Japan in 1908.

25. Muhammad, e.g. : MECCAN
Mecca is in the Makkah province of Saudi Arabia and is the holiest city in Islam. Every year several million Muslims perform the Hajj, a holy pilgrimage to Mecca.

28. Packer in a bookstore : ANN
Ann Packer is a novelist from Stanford. California who is probably best known for her first book called “The Dive from Clausen’s Pier”.

31. Young turkey : POULT
A poult is a young fowl, like a turkey, chicken or pheasant.

42. County whose seat is La Junta : OTERO
La Junta is a municipality that is the county seat of Otero County, Colorado. Ken Kesey, the author of “One Flew Over the Cuckoo’s Nest” was born in La Junta.

43. Means of changing one’s mind : LSD
LSD (colloquially known as “acid”) is short for lysergic acid diethylamide. A Swiss chemist called Albert Hofmann first synthesized LSD in 1938 in a research project looking for medically efficacious ergot alkaloids. It wasn’t until some five years later when Hofmann ingested some of the drug accidentally that its psychedelic properties were discovered. Trippy, man …

45. Quaint letter-opening abbr. : MESSRS
The abbreviation “Messrs.” is used at the head of a list of male names, in place of “Misters”. It is an abbreviation of the French “messieurs”, the plural of “monsieur”.

53. Big inits. in power : TVA
The Tennessee Valley Authority (TVA) has to be one of America’s great success stories when it comes to economic development. Created in 1933, the TVA spearheaded economic development in the Tennessee Valley at the height of the Great Depression. Central to the success was the federally-funded construction of flood-control and electricity-generation facilities.

61. Many a Madrileño : SENOR
A Madrileño (female form: Madrileña) is someone from the city of Madrid, the capital of Spain (España).

5. “Carota” and “Blue II,” for two : MIROS
Joan Miro was a Spanish artist. Miro immersed himself in Surrealism, so much so that Andre Breton, the founder of the movement, said that Miro was “the most Surrealist of us all”. Miro painted “The Tilled Field” in 1923-24, a work that is regarded as Miro’s first Surrealist masterpiece.

10. Peck, e.g.: Abbr. : AMT
A peck is a unit of dry volume, equivalent to two gallons. Four pecks then make up a bushel.

12. Tony with an Emmy : RANDALL
The actor Tony Randall was from Tulsa, Oklahoma. Although Randal had a long and distinguished Hollywood career, he was best known for playing Felix Unger on the TV version of “The Odd Couple” by Neil Simon. Randall was married to his first wife for fifty years, before she passed away in 1993. A few years later, the 75-year old veteran actor married his second wife, who was 50 years his junior. The happy couple had two children together.

13. Like many sonatas’ second movements : ANDANTE
Andante is a tempo marking in a musical score and means “at a walking pace”.

28. “___ wind that bloweth …” : AN ILL
We’ve all probably heard the phrase “‘tis an ill wind that blows nobody any good”. The poet Ogden Nash made a “punny” statement about the oboe, calling the instrument “an ill wind nobody blows good”. I must say though, I disagree …

30. Legendary spring figure : NAIAD
The Naiads of Greek mythology were water nymphs, associated with fountains, wells, springs and streams. The saltwater equivalents to the freshwater Naiads were the Oceanids.

37. Agenda opener : ITEM ONE
“Agenda”is a Latin word that translates as “things to be done”, coming from the verb “agere” meaning “to do”.

40. The Merry Mex of golf : TREVINO
Lee Trevino is an American golfer, of Mexican descent, and so has the nicknames “The Merry Mex” and “Supermex”. He is well known for his great sense of humor and for playing pranks on the golf course. For many years when he played he wore a Band-Aid on his arm, covering the tattoo with the name of his ex-wife.

47. Bill with barbs : MAHER
Bill Maher is a stand-up comedian and political commentator. Maher has an HBO television show called “Real Time with Bill Maher” which is essentially a follow-on from the very successful “Politically Incorrect” that started out on Comedy Central.

50. Fruit giant : DOLE
James Dole lent his name to today’s Dole Food Company. James Dole was known as the Pineapple King, as he developed the pineapple industry in Hawaii and founded the Hawaiian Pineapple Company, the forerunner to the Dole Food Company. Dole might have had some help on the way, as he was cousin to Sanford B, Dole, President of the Republic of Hawaii from 1894 to 1900.

51. Home of the daily Hamshahri : IRAN
“Hamshahri” is a newspaper published in Tehran, Iran.