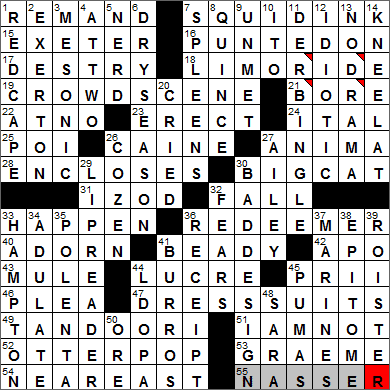 Today’s Wiki-est, Amazonian Googlies
Across
1. Back order? : REMAND
“To remand” is to send back. In the law, the term can mean to send back into custody, or to send back a case to a lower court.

7. Main means of defense? : SQUID INK
Octopuses and squid have the ability to release a dark pigment into the water as a means of escape. The dark pigment is called cephalopod ink (the squid and octopus belong to the class cephalopod). The dark color is created by melanin, the same substance that acts as a pigment in human skin.

15. First city bombed in W.W. II’s Baedeker Blitz : EXETER
Exeter is a historic city in the county of Devon in the southwest of England. The city takes its name from the river on which it lies, the River Exe.

Baedeker travel guides have been around since 1827. Baedeker guides were so popular in the early 20th century that “baedekering” came to mean travelling a country with the intent of writing a travel guide. During WWII the British used the term “Baedeker Blitz” for a series of air attacks on English towns that seemed to have no strategic importance. The suggestion was that the towns were targeted simply because they rated three stars in the Baedeker guide book.

18. Prom amenity : LIMO RIDE
The word “limousine” actually derives from the French city of Limoges. The area around Limoges is called the Limousin, and it gave its name to a cloak hood worn by local shepherds. In early motor cars, a driver would sit outside in the weather while the passengers would sit in the covered compartment. The driver would often wear a limousin-style protective hood, giving rise to that type of transportation being called a “limousine”. Well, that’s how the story goes anyway …

21. “Every hero becomes a ___ at last”: Emerson : BORE
Ralph Waldo Emerson was an essayist and poet who was active in the mid-1800s. Most of the essays that Emerson wrote were composed originally as lectures and then revised for print.

22. W’s is 74 : AT NO
Tungsten is the chemical element with the symbol “W” and the atomic number of 74. The name “tungsten” is Swedish in origin, with “tung sten” translating as “heavy stone”. The material used in tungsten light bulbs is a tungsten alloy.

24. Biased writing?: Abbr. : ITAL
Italic type leans to the right. The style is known as “italic” because the stylized calligraphic form of writing originated in Italy, probably in the Vatican.

25. Pounded side : POI
I am a big fan of starch (being an Irishman I love potatoes). That said, I think that poi tastes horrible! Poi is made from the bulbous tubers (corm) of the taro plant by cooking the corm in water and mashing it until the desired consistency is achieved.

27. Soul : ANIMA
The anima is a the soul or self of an individual.

30. Jaguar, for one : BIG CAT
The jaguar is the third largest feline in the world, after the tiger and the lion. The jaguar resembles a leopard, but is bigger. It is found through much of South and Central America as well as the southern US. The jaguar has a really strong bite, even compared to the bigger cats. It usually kills its prey by biting through the skull.

31. Classic brand in men’s apparel : IZOD
Jack Izod was a tailor of some repute over in England, producing shirts for King George V as well as other members of the Royal Family. As Izod was about to retire, he was approached for the use of his name by an American clothing manufacturer based in New York. The brand Izod of London was introduced to America in 1938.

36. Christ the ___ (Rio de Janeiro landmark) : REDEEMER
The iconic statue of Jesus overlooking the city of Rio de Janeiro in Brazil is known as Cristo Redentor (Christ the Redeemer). The statue was constructed between 1922 and 1931. It is the largest Art Deco statue in the world, standing at over 30 feet tall.

45. Automotive plural selected in a 2011 promotion : PRII
According to Toyota, the plural of “Prius” is “Prii”.

The Toyota Prius is still the most fuel-efficient, gasoline-powered car sold in the US, according to the EPA. The name “Prius” is a Latin word meaning “ahead, leading”. In the US we pronounce the name “pree-us”, but across the Atlantic it’s pronounced “pry-us”. Oh, and I drive one …

49. ___ chicken : TANDOORI
Tandoori chicken is a dish often served in an Indian restaurant. The dish is comprised of roasted chicken covered in yogurt and spices, and takes its name from the clay oven used for the roasting, a tandoor.

52. Frozen treat with Alexander the Grape as one of its flavors : OTTER POP
Otter Pops are plastic tubes filled with frozen fruit juice. Well, Otter Pops are usually sold at room temperature and are frozen by the consumer before consumption.

53. 2010 U.S. Open winner McDowell : GRAEME
Graeme McDowell if a golfer from Portrush, Northern Ireland. In 2010, McDowell won the US Open, the first European to do so in 40 years.

54. Setting of the Levant : NEAR EAST
The Levant is the geographic region that lies east of the Mediterranean, covering modern-day Turkey, Syria, Lebanon, Israel, Palestine, and Egypt. The term is sometimes also used synonymously with the Near East. Syria and Lebanon, when under French rule, were called the Levant States, a name still used at times for the two nations. As one might expect, the word Levant comes from French and was the Middle French word for “the Orient”. The term was used for the Orient as it described lands to the east, where the sun rises (from “lever”, the French word meaning “to rise”). Really, quite interesting …

55. Tito’s successor as head of the Non-Aligned Movement : NASSER
The Non-Aligned Movement (NAM) is a group of countries which are not aligned for or against any major power or major political bloc. The NAM was founded in 1961, and the movement was driven by the leaders of India, Indonesia, Egypt, Ghana and Yugoslavia. The aim of the NAM was to plot a middle course for developing nations, between the Western and Eastern blocs who were mired in the Cold War. The NAM is still active, but is generally viewed as less relevant since the end of the Cold War.

Down
3. Of pions and kaons : MESONIC
A meson is an unstable subatomic particle, made up of one quark and one antiquark.

4. When clocks are set back for the end of daylight saving time : AT TWO
On the other side of the Atlantic, Daylight Saving Time (DST) is known as “summer time”. The idea behind summer/daylight-savings is to move clocks forward an hour in spring and backwards in the fall so that afternoons have more daylight.

5. Pi Day celebrant, perhaps : NERD
The first three digits of the mathematical constant “pi” are 3.14, so Pi Day has been celebrated on March 14th (3/14) every year since 1988 when it was inaugurated at the San Francisco Exploratorium. In countries where the day is usually written before the month, Pi Day is July 22nd, reflecting the more accurate approximation of pi as 22/7. Interestingly, March 14th is also Albert Einstein’s birthday.

7. Malaria enlarges them : SPLEENS
The spleen has a couple of functions in the human body. It removes old red blood cells, and recycles the iron contained therein. The waste product of this recycling is bile. It also holds a reserve of blood that can be released when necessary (if the body goes into “circulatory shock”). Greek and Roman physicians ascribed to the theory that the body had four basic substances, the so-called four humors. All diseases were caused by these four substances getting out of balance. The four humors were:

8. It might be in a jam : QUINCE
The quince is a fruit related to the apple and pear. Some people suggest that the fruit eaten from the Tree of Knowledge by Adam and Eve was in fact a quince.

10. Midori on ice : ITO
Midori Ito is a Japanese figure skater. Ito was the first woman to land a triple/triple jump and a triple axel in competition. In fact she landed her first triple jump in training, when she was only 8 years old …

11. “White Christmas” singer, informally : DER BINGLE
During WWII, Bing Crosby performed lots of live shows in Europe for American troops. He also read propaganda broadcasts in German that were directed towards German forces. In Germany he became known as “Der Bingle”, a name that was eventually picked up by many of his English-speaking fans.

“White Christmas” is song composed by Irving Berlin. The famous 1942 recording of “White Christmas” by Bing Crosby has sold more than 50 million copies worldwide, making it the best-selling single of all time.

13. Obama descriptor : NO DRAMA
Barack Obama earned the nickname “No Drama Obama” during the 2007-2008 presidential campaign, as his progress towards the White Office was viewed by many as relatively cautious and error-free.

26. Deceive : COZEN
What a lovely verb, “to cozen”! Meaning to cheat or hoodwink, the term comes from the Middle English word “cosin” meaning fraud or trickery.

35. Cornmeal mush : POLENTA
Polenta is a porridge made from finely ground corn. The term “polenta” is Italian.

37. Devil dogs : MARINES
The US Marines picked up the nickname “Devil Dogs” during WWI. It was reported at that time, though the story seems unfounded, that the German soldiers referred to the US Marines as “Teufel Hunden” meaning “Devil Dogs”. Even if the derivation was bogus, the nickname is still used to this day.

38. Height : EPITOME
The more common meaning of “epitome” is a perfect example of a group, quality, type etc. “Epitome” is also another word for an abstract or summary of a book or article.

44. One of two components of the drug Sinemet : L-DOPA
L-3,4-DihydrOxyPhenylAlanine, thankfully can be shortened to L-DOPA. Swedish scientist Arvid Carlsson won a Nobel Prize for showing that L-DOPA could be used to reduce the symptoms of Parkinson’s Syndrome.

Franklin Delano Roosevelt was the only child of Sara Delano and James Roosevelt Sr. The Delano family history in America goes back to the pilgrim Philippe de Lannoy, an immigrant of Flemish descent who arrived at Plymouth, Massachusetts in 1621. The family name “de Lannoy” was anglicized here in the US, to “Delano”.