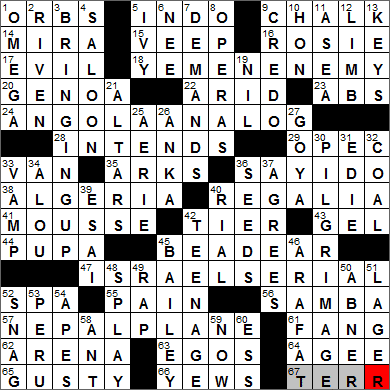 CROSSWORD SETTER: Daniel Raymon
THEME: Anagram of Country … each of today’s themed answers is made up of a country name followed by an anagram of that name:

18A. Adversary on the Arabian Peninsula? : YEMEN ENEMY
24A. Something comparable in southern Africa? : ANGOLA ANALOG
38A. With 40-Across, royal emblems in North Africa? : ALGERIA
40A. See 38-Across : REGALIA
47A. TV show in the Mideast? : ISRAEL SERIAL
57A. Part of an air force in south-central Asia? : NEPAL PLANE

Today’s Wiki-est, Amazonian Googlies
Across
5. ___-European : INDO
The Indo-European languages are a large group that includes most of the major languages of Europe, the Iranian plateau and South Asia. The Indo-European is the largest grouping of languages in the world.

14. Sorvino of “Mighty Aphrodite” : MIRA
Mira Sorvino is an American actress, winner of an Oscar for her supporting role in the 1995 Woody Allen movie “Mighty Aphrodite”. Sorvino also played a title role opposite Lisa Kudrow in the very forgettable “Romy and Michele’s High School Reunion”.

16. W.W. II’s ___ the Riveter : ROSIE
Rosie the Riveter is a cultural icon that represented women working in factories across the country during WWII as part of the war effort. The term “Rosie the Riveter” first appeared as the title of a 1942 song that was a national hit.

17. “Don’t be ___” (Google’s motto) : EVIL
“Don’t be evil” is Google’s corporate motto. The concept is incorporated into one of the company’s formally defined Core Values: “Do the right thing: don’t be evil. Honesty and Integrity in all we do. Our business practices are beyond reproach. We make money by doing good things.”

18. Adversary on the Arabian Peninsula? : YEMEN ENEMY
Yemen is located on the Arabian Peninsula, lying just south of Saudi Arabia and west of Oman. Yemen is the only state on the peninsula that is a republic (its official name is the Republic of Yemen). Everyone over the age of 18 gets to vote, but only Muslims can hold elected office.

20. Home of Cristoforo Colombo Airport : GENOA
Genoa is a seaport in the very north of Italy, in the region known as Liguria. One of Genoa’s most famous sons was Christopher Columbus.

24. Something comparable in southern Africa? : ANGOLA ANALOG
Angola is a country in south-central Africa, on the west coast. Angola is the fourth largest diamond exporter in Africa, after Botswana, the Congo and South Africa. Such a valuable export hasn’t really helped the living standard of the country’s citizens as life expectancy and infant mortality rates are among the poorest on the continent.

29. Source of a 1973 crisis : OPEC
The 1973 Oil Crisis started when the Arab members of OPEC imposed an oil embargo. The action was taken as retaliation for the decision by President Nixon to resupply the Israeli military during the Yom Kippur War.

35. Torahs are kept in them : ARKS
The Torah ark is found in a synagogue, and is the ornamental container in which are stored the Torah scrolls.

38. With 40-Across, royal emblems in North Africa? : ALGERIA
40. See 38-Across : REGALIA
Algeria is a huge country, the second largest in Africa (only Sudan is larger), and the largest country on the Mediterranean. The capital of Algeria is Algiers, and the country takes its name from the city.

44. Insect stage after larva : PUPA
The pupa is an intermediate stage in the development of an insect. All four stages are embryo, larva, pupa and imago.

47. TV show in the Mideast? : ISRAEL SERIAL
The area that is now Israel was ruled by the British after WWI as the British Mandate of Palestine. The British evacuated the area after WWII, largely responding to pressure from both Jewish and Arab nationalist movements. The British Mandate expired on 14 May 1948 and the State of israel was established at the same time. This declaration of a new state was followed by the immediate invasion of the area by four Arab countries and the start of the 1948 Arab-Israeli War. A ceasefire was declared after a year of fighting and tension has persisted in the region ever since.

52. Place with complimentary towels : SPA
The word “spa” migrated into English from Belgium, as Spa is the name of a municipality in the east of the country that is famous for its healing hot springs. The name “spa” comes from the Walloon word “espa” meaning “spring, fountain”.

55. Ibuprofen target : PAIN
Ibuprofen is a shortened version of the drug’s name Iso-BUtyl-PROpanoic-PHENolic acid. It’s actually an anti-inflammatory, but is good for headaches too apparently.

56. Brazilian dance : SAMBA
Samba is a Brazilian dance, very much symbolic of the festival known as Carnival. Like so much culture around the world, the Samba has its roots in Africa, as the dance is derived from dances performed by former slaves who migrated into urban Rio de Janeiro in the late 1800s. The exact roots of the name “samba” seem to have been lost in the mists of time. However, my favorite explanation is that it comes from an African Kikongo word “Semba” which means “a blow struck with the belly button”. We don’t seem to have a need for such a word in English …

57. Part of an air force in south-central Asia? : NEPAL PLANE
Nepal lies to the northeast of India. Today, the state is known as the Federal Democratic Republic of Nepal. In 2008, the Communist Party of Nepal won the country’s general election. Soon after, the Assembly voted to change the form of government, moving away from a monarchy and creating a secular republic.

67. The U.S. Virgin Is., e.g. : TERR
The US Virgin Islands are located in the Caribbean, and are part of the Virgin Islands archipelago. The three largest islands of the US territory are Saint Croix, Saint John and Saint Thomas. The island chain was named by Christopher Columbus in 1493 in honor of Saint Ursula and her virgin followers. The United States bought the islands from Denmark during WWI in a move designed to thwart plans by Germany to use them as a submarine base.

Down
1. Alpha’s opposite : OMEGA
Omega is the last letter of the Greek alphabet and is the one that looks like a horseshoe. The word “omega” literally means “great O” (O-mega). Compare this with the Greek letter Omicron meaning “little O” (O-micron).

2. Torn apart : RIVEN
“To rive” is to tear apart, a verb that we’ve been using since about 1300, from the Old Norse word “rifa” that also means to tear apart.

5. Poison ___ : IVY
Two of the plants that are most painful to humans are poison oak and poison ivy. Poison oak is mainly found west of the Rocky Mountains, and poison ivy to the east.

6. Maiden name preceder : NEE
“Née” is the French word for “born” when referring to a female. The male equivalent is “né”.

8. Puccini productions : OPERAS
Giacomo Puccini is was an Italian composer, famous for his operas that are so often performed all over the world. Included in the list of his works are “La bohème”, “Tosca”, “Madama Butterfly” and “Turandot”. Puccini died in Brussels, Belgium in 1924 having suffered from throat cancer. An audience attending a performance of “La bohème” in Rome heard of the composer’s death in the middle of the performance. At the news, the opera was stopped, and the orchestra instead played Chopin’s “Funeral March”.

26. Paul who sang “Lonely Boy” : ANKA
Canadian-born Paul Anka’s big hit was in 1957, the song entitled “Diana”. Anka was the subject of a much-lauded documentary film in 1962 called “Lonely Boy”.

27. “The Naked Maja” or “The Clothed Maja” : GOYA
Francisco Goya was a Spanish painter, often called the last of the Old Masters and the first of the moderns. Two of Goya’s most famous works are “The Nude Maja” and “The Clothed Maja”.

32. Either of Frosty the Snowman’s eyes : COAL
“Frosty the Snowman” is a song that was recorded first by Gene Autry, in 1950. The song was specifically written in the hope that it would become a follow-up hit to Autry’s “Rudolph the Red-Nosed Reindeer” that topped the charts the previous year.

33. Siren : VAMP
A vamp (short for vampire) is a seductive woman.

In Greek mythology, the Sirens were seductive bird-women who lured men to their deaths with their song. When Odysseus sailed closed to the island home of the Sirens he wanted to hear their voices, but in safety. He had his men plug their ears with beeswax and then ordered them to tie him to the mast and not to free him until they were safe. On hearing their song Odysseus begged to be let loose, but the sailors just tightened his bonds and and the whole crew sailed away unharmed.

34. Baseball’s Moises : ALOU
Jesus Alou played major league baseball, as did his brothers Matty and Felipe, and as does Felipe’s son, Moises.

39. Morales of “La Bamba” : ESAI
Esai Morales is best known for his role in the 1987 movie “La Bamba”, which depicted the life of Ritchie Valens and his half-brother Bob Morales (played by Esai).

40. 29-Across country currency : RIAL
The “Rial” is name of the currency of Iran (as well as Yemen, Oman, Cambodia and Tunisia).

42. Like the “wasteland” in a classic Who song : TEENAGE
The song by the Who commonly called “Teenage Wasteland” actually has the title “Baba O’Riley”. “Baba O’Riley” is used as the theme song for the television show “CSI: New York”.

45. Circus man : BAILEY
James Anthony Bailey collaborated with P. T. Barnum to establish Barnum and Bailey’s Circus. It was Bailey who negotiated the deal to buy a famous elephant from London Zoo in 1882, the one called “Jumbo”. It was the exposure that Jumbo got in the circus that brought into common usage our term “jumbo” meaning “huge”.

46. Oslo Accords figure : ARAFAT
Yasser (also Yasir) Arafat was born in Cairo in 1929, the son of two Palestinians and the second-youngest of seven children. Arafat was beaten by his father as a child and so did not have a good relationship with him. Arafat did not attend his father’s funeral, nor did he visit his grave. The beatings were apparently administered because the young Arafat was repeatedly attending religious services in the Jewish quarter of Cairo. Arafat’s explanation was that he wanted to “study the mentality” of the Jewish people.

49. Genre of N.W.A. and Run-D.M.C. : RAP
NWA was a hip hop group from Compton, California. The original five group members included rappers who have made a name for themselves as solo acts, including: Dr. Dre and Ice Cube.

50. Al Capp guy : ABNER
“Li’l Abner” was a comic strip created and drawn by Al Capp for over 43 years starting in 1934. Al Capp stopped producing the strip in 1977, largely due to illness (he died from emphysema two years later). As the strip finished up, he went so far as to apologize to his long-standing fans, saying that he should have stopped 3-4 years earlier as he felt that the quality of his work had gone down in those latter years.

51. “Pale” or “dark” beverage : LAGER
Lager is so called because of the tradition of cold-storing the beer during fermentation. “Lager” is the German word for “storage”.

53. Homeland of Literature Nobelist Mario Vargas Llosa : PERU
Mario Vargas Llosa is a Peruvian writer of renown, one of the most significant authors from Latin America by all accounts. Llosa is also very active politically, and in 1990 ran unsuccessfully for the Peruvian presidency.