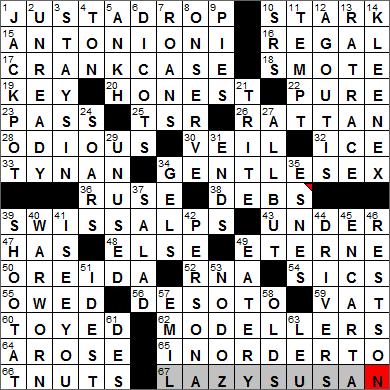 Today’s Wiki-est, Amazonian Googlies
Across
15. Director Michelangelo : ANTONIONI
Michelangelo Antonioni was a film director from Italy. Antonioni’s most famous movies are the trilogy “L’Avventura” (1960), “La Notte” (1961) and “Eclipse” (1962). He died in 2007, coincidentally on the same day that famed director Ingmar Bergman also passed away.

19. *Basketball area : KEY
The free throw lane on a basketball court is also referred to as “the key”.

20. Unlike Iago : HONEST
Iago is the schemer in Shakespeare’s “Othello”. Iago is a soldier who fought alongside Othello and feels hard done by, missing out on promotion. He hatches a plot designed to discredit his rival Cassio by insinuating that Cassio is having an affair with Desdemona, Othello’s wife. By the end of the play it’s Iago himself who is discredited and Othello (before committing suicide) apologizes to Cassio for having believed Iago’s lies. Heavy stuff …

26. Cane material : RATTAN
Rattan is the name of a large number of species of palms, all of which look less like trees and more like vines. The woody stems are used for making cane furniture.

33. British critic Kenneth who created “Oh! Calcutta!” : TYNAN
Kenneth Tynan was a theater critic in England who was noted for his opposition to censorship. He was the first person on British television to us the “f word”. He also created the theatrical revue “Oh! Calcutta!” that dealt with many sex-related topics and featured lots of nudity.

36. Bit of flimflam : RUSE
Flimflam is another word for a confidence trick. The term has been in use since the 1500s, would you believe?

38. Third-place candidate in the 1920 presidential election who ran his campaign from jail : DEBS
Eugene V. Debs was an American union leader who ran as a candidate for US President in 5 elections from 1900 through 1920. Debs was a dedicated socialist and ran as a member of the Social Democratic Party, and later the Socialist Party of America.

50. Portmanteau food brand : ORE-IDA
Ore-Ida frozen foods are all made with potatoes. The company is located in Oregon, just across the border from Idaho. “Ore-Ida” is a melding of the two state names.

52. Microscopic messenger : RNA
Ribonucleic Acid (RNA) is an essential catalyst in the manufacture of proteins in the body. The genetic code in DNA determines the sequence of amino acids that make up each protein. That sequence is read in DNA by messenger RNA, and amino acids are delivered for protein manufacture in the correct sequence by what is called transfer RNA. The amino acids are then formed into proteins by ribosomal RNA.

56. Pizarro contemporary : DE SOTO
Hernando de Soto was a Spanish conquistador who led expeditions throughout the southeastern US. De Sotos travels were unsuccessful in that he failed to bring gold or silver back to Spain, and nor did he found any colonies. What de Soto did achieve was the exposure of local populations to devastating Eurasian diseases.

Spanish conquistador Francisco Pizarro discovered the Incas in 1526, marking the beginning of the end for an ancient civilization that was to be ravaged by brutal Spanish colonists and by imported smallpox. The last leader of the Inca was Atahualpa. Pizarro staged a mock trial and then condemned Atahualpa to execution by burning. A Spanish friar intervened on behalf of the condemned man, as Atahualpa believed that if he was burned his soul would not move on to the afterlife. Pizarro, was kind enough to have Atahualpa garroted instead.

Not only is Noah Webster’s name inextricably linked with his series of dictionaries, but he is also renowned as an advocate for English spelling reform. He argued that “traditional” English is hard to learn and that it should be simplified and standardized. He published spelling books that were used in schools, and from edition to edition he changed the spelling of words in order to simplify the language. Examples are the use of “s” over “c” in words like “defense” (in Ireland we have defence and defense depending on usage), “-re” became “-er” as in “center” instead of “centre” (reversing the influence of French), and he dropped one of the Ls in words like traveler (I learned “traveller”). Mind you, he also spelled “tongue” as “tung”, but he didn’t get very far with that one.

66. Wood fasteners : T-NUTS
A T-nut is so called because it has a t-shape when viewed from the side.

67. Revolutionary invention for restaurants? : LAZY SUSAN
A Lazy Susan is a circular tray at the center of a dining table that can be rotated by those partaking in the meal. The term “Lazy Susan” was introduced in the early 1900s, first appearing in an article in the magazine “Good Housekeeping”. Before this designation, the device had been called a “dumbwaiter”, a term we now use for a small elevator used for transporting food from a kitchen to a dining room.

Down
1. Something good to hit : JACKPOT
The term “jackpot” dates back to the 1800s and is from the game of poker. In some variants there are progressive antes, meaning that players have to “ante up” when no player has a pair of “jacks” or better … building a “jackpot”.

3. What an agoraphobe does : STAYS IN
In early Greece the “agora” was a place of assembly. Often the assemblies held there were quite formal, perhaps for the reading of a proclamation. Later in Greek history, things became less formal as the agora evolved into a market place. Our contemporary word “agoraphobia” comes from these agorae, in the sense that an agoraphobe has a fear of open spaces, a fear of “public meeting places”.

5. Symbol of life : ANKH
The ankh was the ancient Egyptian hieroglyphic character for “eternal life”. The ankh wasn’t just used in inscriptions but was often fashioned into amulets and as surrounds for mirrors (perhaps symbolizing a view into another world).

6. Daisies and the like, botanically : DICOTS
Dicotyledons (also called “dicots”) are flowering plants who have seeds divided into two cotyledons, two embryonic leaves.

7. Stable colors : ROANS
A roan horse has an even mixture of white and colored hairs on the body with the head, lower legs, mane and tail having a more solid color.

9. Circlegraph shapes : PIES
“Circle graph” is another name for a “pie chart”.

12. Relatives of guinea pigs : AGOUTIS
The term “agouti” is used for some rodents in Central and south America who have fur with bands of light and dark pigmentation.

14. Product that might be used with a blessing : KLEENEX
Even though Kleenex is sometimes used today as a generic term for a tissue, Kleenex is a brand name owned by Kimberley-Clark. Kleenex facial tissues came about after WW1. The material used in the tissue had been developed as a replacement for cotton that was in high demand as surgical tissue during the war. The material developed was called “Cellucotton” and was used in gas mask filters. It was first sold as a facial tissue under the name Kleenex in 1924.

35. Feudal thralls : ESNES
“Esne” is an uncommon word, a synonym for “serf” as best I can tell, a member of the lowest feudal class.

40. Like Europe in 1945 : WARWORN
VE Day (Victory in Europe Day) was celebrated on 8 May 1945 and marked the day when the Allies accepted the formal surrender of the German armed forces.

45. Wikipedia precursor : ENCARTA
Microsoft badly wanted to get into the online encyclopedia business in the eighties, and approached the biggest and the best, “Encyclopaedia Britannica”. “Britannica” declined, fearing that an online version would damage their print sales. Of course, “Britannica” had to sell eventually, but not to Microsoft, as the inevitable decline in print sales happened anyway. So Microsoft made a deal with “Funk & Wagnalls”, and started publishing “Encarta” in disk form in the early nineties. Usage of Encarta grew, until, along came Wikipedia. Encarta was discontinued in at the end of 2009, with just the online dictionary surviving, as an online offering.

57. ___ Zátopek, four-time Olympic track gold medalist : EMIL
Emil Zátopek was a long-distance runner from Czechoslovakia who is best-remembered for winning three gold medals at the 1952 Summer Olympics. He had trained for the 5,000 meter and 10,000 meter events, and won both of them. He then decided to run the first marathon of his life, and won that too!

58. Delta 88, e.g., informally : OLDS
The REO Motor Company was founded by Ransom E. Olds (hence the name REO). The company made cars, trucks and buses, and was in business from 1905 to 1975 in Lansing, Michigan. Olds introduced the Oldsmobile brand in 1897.

61. Paris’s Avenue ___ Champs-Élysées : DES
The Avenue des Champs-Élysées is one of the most famous streets in the world. It is the main thoroughfare in Paris, home to the Arc de Triomphe and the Place de la Concorde. The name “Champs-Élysées” is French for Elysian Fields, a place where the righteous went after death according to Greek mythology.

63. Money of Romania : LEU
The currency of Romania is the leu (plural: lei), a word meaning “lion”. The leu is also the name of the currency of neighboring Moldova. Romania joined the European Union in 2007, and is planning on moving to the Euro in 2014.