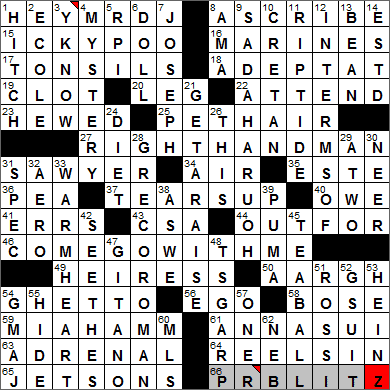 Today’s Wiki-est, Amazonian Googlies
Across
1. 1993 hit with the lyric “Keep playin’ that song all night” : HEY MR DJ
“Hey Mr DJ” was the debut single for R&B duo Zhané,and was released in 1993.

16. Blue dress wearers : MARINES
The Marine Corps Blue Dress uniform is the one that is perhaps most recognizable, and is often used in recruiting posters.

17. A guillotine is used to remove them : TONSILS
The palatine tonsils are located at the back of the human throat. The exact role that tonsils play isn’t completely understood, but it is known that they are in the first line of defense in the body’s immune system. They provide some level of protection against pathogens that are ingested and inhaled.

27. Friday, e.g. : RIGHT-HAND MAN
In Daniel Defoe’s 1719 novel “Robinson Crusoe”, the castaway encounters a companion that Crusoe calls “Friday”, because the two first met on that day. Friday soon becomes his willing servant. This character is the source of our terms “Man Friday” and “Girl Friday”, which are used to describe a particularly competent and loyal assistant.

31. Successor to Gibson on “ABC World News” : SAWYER
Diana Sawyer is the anchor of ABC’s news program “ABC World News”. Sawyer started her career in the Nixon White House where she was hired by the Press Secretary at the time, Ron Ziegler. She worked with Nixon to help him write his memoirs after he left office and helped prepare the ex-president for his famous series of television interviews with David Frost in 1977. Sawyer is married to Mike Nichols, the noted film director.

36. Subject for Gregor Mendel : PEA
Gregor Mendel was an Austrian monk, and a scientist who achieved fame after his passing when his work in the field of genetics was rediscovered. The conclusions he drew from his studies of garden peas led to him earning the moniker “father of modern genetics”.

46. 1957 Dell-Vikings hit : COME GO WITH ME
“Come Go with Me” was a 1957 hit for the doo-wop group called the Del-Vikings. You can hear the song on the soundtracks of the movies “American Graffiti”, “Stand by Me” and “Joe Versus the Volcano”.

54. Area of need : GHETTO
The first “ghetto” was an island in Venice that was used for confining Venetian Jews. The same island was used to store slag from a foundry, and “getto” was the Venetian word for “slag”. The term ghetto spread across Europe, at the beginning always associated with repressed Jewish populations. Ultimately it came to mean any urban area housing a minority group under economic and social pressure.

58. Speaker of the house, perhaps : BOSE
Bose Corporation was founded in 1964 by Amar G. Bose, and is a company that specializes in manufacture of audio equipment.

59. Famed kicker born with a clubfoot : MIA HAMM
Mia Hamm is a retired American soccer player, a forward who played on the US national team that won the FIFA women’s World Cup in 1991. Hamm has scored 158 international goals, more than other player in the world, male or female. Amazingly, Hamm was born with a club foot, and so had to wear corrective shoes when she was growing up.

63. Hydrocortisone producer : ADRENAL
Cortisol is a naturally occurring chemical, a hormone produced by the adrenal glands. In the body it is secreted as a response to stress or when there is low blood sugar, and its primary purpose is to increase blood sugar levels. Cortisol also has the effect of suppressing the bodies immune response. As such, the pharmaceutical form of cortisol (usually called hydrocortisone) is used to treat allergic reactions. Hydrocortisone can calm down skin irritation if applied as a cream (and usually mixed with aloe).

Down
2. Place for une faculté : ECOLE
In French, a school (école) night have several faculties (facultés).

5. Sch. with a Hartford campus : RPI
The Rensselaer Polytechnic Institute (RPI) is a private school in Troy, New York. The university is named after its founder Stephen Van Rensselaer who set up the school in 1824. The goal of RPI has always been the “application of science to the common purposes of life”, an objective set by the founder. Given that, the name for the school’s sports teams is quite apt: the Engineers.

7. Nez Percé war chief : JOSEPH
Chief Joseph led the Nez Perce Native Americans during the tribe’s most difficult times. He was leader when the US federal government forcibly removed the Nez Perce from their lands in northeastern Oregon, and during the resulting in the Nez Perce war of 1877. The war was in effect a fighting retreat by a band of warriors led by Chief Joseph, a retreat the lasted for over 1,000 miles to the border with Canada in Montana.

The Nez Perce tribe of the Pacific Northwest call themselves the Nimiipuu, meaning “The Real People”. The name “Nez Percé” means “pierced nose” in French, a name applied in error to the Nimiipuu, instead of the neighboring Chinook tribe that practiced nose piercing.

8. Org. that endorsed Obamacare : AMA
The American Medical Association (AMA) was founded in 1847 at the Academy of Natural Sciences in Philadelphia. The first female member was allowed to join the AMA in 1868, but the first African American members weren’t admitted until one hundred years later, in 1968.

The correct name for what has been dubbed “Obamacare” is the “Patient Protection and Affordable Care Act”.

9. He hit 106 more home runs than Barry Bonds : SADAHARU OH
Sadaharu Oh is a retired Japanese baseball player who turned out for the Yomiuri Giants for his whole career. Oh holds the world career record for home runs, having hit 868.

11. Concern for a lifeguard : RIP TIDE
A rip current (wrongly called a rip “tide” sometimes) is a localized current that flows seaward from near the shore. Rip currents are dangerous as they can pull swimmers out to sea.

28. Some-holds-barred sport : GRECO-ROMAN
Greco-Roman wrestling was contested at the first modern Olympic Games, back in 1896. Back then there was relatively little regulation of the sport and Greco-Roman contests were noted for their brutality. Bouts also took a long time to finish, often lasting hours. In fact, the competitors in the 1912 Olympic final were both awarded silver medals when the bout was ended by the judges after eight hours of wrestling.

29. Audi model retired in 2005 : A-TWO
The A2 is compact car that was produced by Audi from 1999 to 2005. The A2 was made from aluminium and so is relatively light. It also has an efficient engine, so the vehicle is noted for its economical use of fuel.

32. México lead-in : AERO-
Aeroméxico is the flag carrier airline of Mexico. Aeroméxico started out in 1934 as Aeronaves de México.

The jaguarundi is a small wild cat that is native to Central and South America. You used to be able to find the jaguarundi in Texas as well, but its believed they are extinct there now.

45. Infusion aid : TEA BALL
A tea ball or tea egg is more usually called a tea infuser. It is basically a ball, made of perforated metal or mesh, into which loose tea is placed. It has been superseded by the modern tea bag. I drink an awful lot of tea, and have a tea ball here at the house. Trust me, life is a lot easier using tea bags …

47. Jordache alternative : GITANO
Gitano is a brand of jeans sold by Kmart.

Jordache is an American clothing company that is noted for its designer jeans.

48. Literary son of Jenny Fields : TS GARP
John Irving’s 1978 novel “The World According to Garp” is somewhat biographical. In fact, Irving’s mother found parts of the novel difficult to read, recognizing elements of herself in Garp’s mother, Jenny Fields.

51. “Orfeo” composer Luigi : ROSSI
Luigi Rossi was an Italian composer, from the kingdom of Naples, who was active during the Baroque period. Rossi was hired to compose the second of his two operas by the first minister of France. Rossi travelled to France and wrote “Orfeo”. “Orfeo” was one of the first operas to be performed in that country, having its debut in Paris in 1647.

52. Wear during re-entry : G-SUIT
A G-suit is needed when astronauts and aviators are subject to high accelerations. Such acceleration can cause blood to pool in the lower part of the body, reducing the supply to the brain and possibly leading to a blackout. A G-suit is basically a special pair of tight-fitting pants that are fitted with inflatable bladders. The bladders inflate during high accelerations, tightening around the legs and abdomen, reducing the amount of blood pooling.

53. It’s known for its varieties : HEINZ
The Heinz food company is an American concern, based in Pittsburgh, Pennsylvania. The company was founded in 1869, by Henry John Heinz. It was Heinz himself who came up with the marketing slogan of “57 Varieties”. The “57” really doesn’t have any relevance to the range of products available as Heinz chose the “5” because it was his lucky number, and the “7” because it was his wife’s lucky number.

54. Setting of “Love Me Do”: Abbr. : G MAJ
“Love Me Do” is a song written by Paul McCartney on a day he was playing hooky from school when he just 16 years of age.

62. Tortoise’s beak : NEB
Some tortoises can have beaks, beaks that look something like the beaks of parrots.