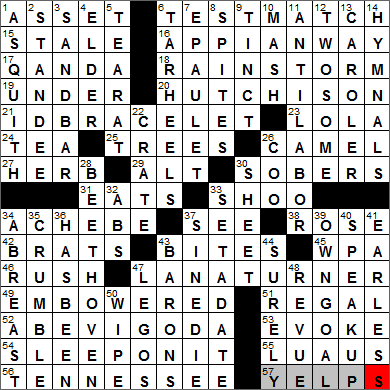 Today’s Wiki-est, Amazonian Googlies
Across
6. International cricket event : TEST MATCH
Test matches are played between international teams in the sport of cricket, although the teams have to be ranked as “first-class” in order to play. As of now, there are only ten national teams eligible to play in test matches. The Irish team is leading the charge to be the eleventh team in the elite club. A test match can take five days to produce a result.

16. Road built during the Samnite Wars : APPIAN WAY
The Appian Way has to be the most famous of the amazing roads of Ancient Rome. It stretched from Rome right into the south of Italy, terminating in the city of Brindisi in the southeast. The first section of the military road was completed in 312 BC, by the Roman censor called Appius Claudius Caecus, who gave the road its name “Via Appia”, or “Appian Way”.

There were three Samnite Wars fought between the Roman Republic and the tribes of Samnium, with the prize being control of ancient Italy. The Samnites were an ethinic people who lived in south-central Italy.

20. Republican who won Bentsen’s vacated Senate seat : HUTCHISON
Kay Bailey Hutchison was US Senator for the state of Texas from 1993 to 2013. A Republican, Hutchison took Lloyd Bentsen’s seat when he resigned to become Secretary of the Treasury for President Clinton. In so doing, she became the first female US Senator to represent Texas.

23. 1970 Kinks album title starter : LOLA
“Lola” is a fabulous song, written by Ray Davies and released by the Kinks back in 1970. Inspired by a real life incident, the lyrics tell of young man who met a young “lady” in a club, danced with her, and then discovered “she” was actually a transvestite. The storyline isn’t very traditional, but the music is superb.

26. Joe who was retired in 1997 : CAMEL
The advertising mascot for Camel cigarettes was officially known as “Old Joe”, but was popularly known as “Joe Camel”. Joe originated in the seventies, in an advertising campaign that ran only in Europe where sometimes he was depicted wearing a French Foreign Legion cap. He was imported to the US in 1988 on the occasion of the 75th anniversary of the Camel brand. The big controversy surrounding the use of the camel character was that a 1991 study found that 5-6 year old children could recognize Joe Camel more readily than either Mickey Mouse or Fred Flintstone. Also, soon after Old Joe was introduced in the US, the Camel brand’s share of the illegal market to underage smokers went up from 1% to just under 33%.

31. Chow : EATS
“Chow” is an American slang term for food that originated in California in the mid-1800s. “Chow” comes from the Chinese pidgin English “chow-chow” meaning “food”.

34. “Things Fall Apart” novelist : ACHEBE
Nigerian novelist Chinua Achebe was born in the Igbo region in the south of the country. His first novel was “Things Fall Apart”, a book that has the distinction of being the most widely read in the whole of African literature.

38. What the name “Rhoda” means : ROSE
The girl’s name “Rhoda” originates in both Latin and Greek and means “rose”. The name can also mean “from Rhodes”, with Rhodes being a Greek island that was named for its roses.

45. New Deal program, for short : WPA
The Work Progress Administration (WPA) was the largest of the New Deal agencies. The WPA employed millions of people during the Depression, putting them to work on various public works projects. The total spending through the WPA from 1936 to 1939 was nearly $7 billion. We have to give the federal government credit for taking an enlightened view of what types of project qualified for financial support, so artists who could not get commissions privately were hired by the government itself. The result is a collection of “New Deal Art”, including a series of murals that can be found in post offices around the country to this day.

47. She and Clark Gable were known as “the team that generates steam” : LANA TURNER
Lana Turner started work as a Hollywood actress at a very young age, signing up with MGM at only sixteen. Early in her career she earned the nickname “The Sweater Girl” after wearing a pretty tight sweater in the film “They Won’t Forget”, which was her film debut. She married eight times, to seven different husbands, the first of which was bandleader Artie Shaw. Shaw and Turner eloped and married on their very first date, when the young actress was just nineteen years old. After divorcing Shaw she married restaurateur Joseph Crane, but had the marriage annulled when she found out that Crane was still married to his first wife. The two had a daughter together, and so remarried when Crane’s divorce was finalized. Cheryl Crane was the daughter from the marriage to Joseph and she lived with Turner after her parents split up. When Cheryl was 14-years-old, her mother was romantically involved with a shady character named Johnny Stompanato. One evening Cheryl found her mother engaged in a violent argument with Stompanato, and Cheryl became so scared that she pulled out a gun and killed him in what was deemed to be justifiable homicide. Turner’s last marriage was to a nightclub hypnotist, Ronald Pellar, and that union lasted just six months as Pellar disappeared one day with a lot of Turner’s money and jewelry. Years later Turner said, “My goal was to have one husband and seven children, but it turned out to be the other way around.”

52. Player of Sal in “The Godfather” : ABE VIGODA
Abe Vigoda played Detective Sergeant Phil Fish in television’s “Barney Miller” in the seventies, and even got his own spin-off show called “Fish”. On the big screen he played Sal Tessio in “The Godfather” and Grandpa Ubriacco in “Look Who’s Talking”.

55. Parties with mai tais, maybe : LUAUS
Nowadays the word “luau” denotes almost any kind of party on the Hawaiian Islands, but to the purist a luau is a feast that always includes a serving of “poi”, the bulbous underground stems of taro baked with coconut milk.

The Mai Tai cocktail is strongly associated with the Polynesian islands, but the drink was supposedly invented in 1944 in Trader Vic’s restaurant in Oakland, California. One recipe is 6 parts white rum, 3 parts orange curaçao, 3 parts Orgeat syrup, 1 part rock candy syrup, 2 parts fresh lime juice, all mixed with ice and then a float added of 6 parts dark rum.

56. Titan’s home : TENNESSEE
The Tennessee Titans are a football team based in Nashville. The team relocated to Nashville from Houston in 1997, and was called the Tennessee Oilers for two seasons, before adopting the “Titans” moniker.

Down
1. British P.M. when W.W. I began : ASQUITH
H. H. Asquith was a member of the Liberal Party and Prime Minister of the UK from 1908 to 1916. Asquith is perhaps better respected in hindsight for his leadership in peacetime, introducing social welfare benefits and reducing the power of the House of Lords. His leadership during WWI was questioned, with charges that he tended to vacillated when there was a need for decisiveness. Asquith led the country into WWI and was unseated by David Lloyd George before the war ended.

6. Five-time N.C.A.A. basketball champs from the A.C.C. : TAR HEELS
Tar Heel is a nickname for anyone living in, or from, the state of North Carolina. As such, it is the nickname also of the athletic teams of the University of North Carolina. No one seems to know for sure where the term “Tar Heel” originated, but it is thought to be related to the historical importance of the tar, pitch and turpentine industries that thrived in the state due to the presence of vast forests of pine trees.

9. Add color to : TINCT
To tinct is to do just that, add a little color to something.

10. 1968 novel set in Korea : MASH
“MASH: A Novel About Three Army Doctors” is a novel written by “Richard Hooker” and first published in 1968. “Richard Hooker” was the pen name used by Dr. H, Richard Hornberger and writer W. C. Heinz. The novel was of course the inspiration for the icon movie “M*A*S*H” and the great spinoff television series.

“M*A*S*H” has only three stars in it (three asterisks, that is!). These asterisks first appeared on the poster for the 1970 movie, but they were omitted in the opening titles. The TV series went on to use the asterisks from the poster. The original novel had no asterisks at all.

13. Performer on the road? : CAROLER
The word “carol” came into English via the Old French word “carole”, which was a “dance in a ring”. When “carol” made it into English, about 1300 AD, the term was used to describe a dance as well as a joyful song. Around 1500 AD, carols that were sung came to be associated with Christmas.

22. Stevedore’s burden : CRATE
A stevedore, or longshoreman, is someone employed in the loading and unloading of ships at a port. The word “stevedore” comes from the Spanish “estibador”, meaning “one who loads cargo”. The word “longshoreman”, is simply from “a man who works alongshore”.

28. “Music should strike fire from the heart of man, and bring tears from the eyes of woman” speaker : BEETHOVEN
Famously, the composer Ludwig van Beethoven started losing his hearing by the age of 26, eventually becoming completely deaf. And of course, Beethoven composed some of his most appreciated works when he could hear nothing at all. It’s not really certain what caused his deafness, and some have even suggested that it was because of his habit of ducking his head into cold water in order to stay awake …

33. Begin planning the nuptials : SET A DATE
Our word “nuptial” is an adjective meaning “of marriage, of the wedding ceremony”. The term derives from “nuptiae”, the Latin for “wedding, marriage”.

37. How Congress might adjourn : SINE DIE
“Sine die” is the Latin for “without day”. The term is used as part of the term “adjournment sine die” that means “without assigning a day for a further meeting or hearing”. So, an assembly that adjourns sine die is one that adjourns without appointing a specific day to meet again.

41. Seal classification : EARLESS
There are three families of seals. The first is the walrus family, the second the eared seals (like sea lions), and thirdly the earless seals.

43. Magna Carta’s drafters : BARONS
The Magna Carta is a landmark document issued in England in 1215. It represents the first time that an English king had to submit to the will of his subjects, a group of barons who sought to limit the powers of the monarchy. In particular the Magna Carta calls out that no freeman could be punished except through the law of the land. And of course, the Magna Carta was an inspiration for the United States Constitution.

47. Largely hollow bricks : LEGOS
Lego is manufactured by Lego Group, a privately held company headquartered in Billund, Denmark. The company was founded by a carpenter called Ole Kirk Christiansen in 1934 and the now-famous plastic interlocking blocks were introduced in 1949. The blocks were originally sold under the name “Automatic Binding Bricks” but I think “Lego” is easier to remember! The name “Lego” comes from the Danish term “leg godt” meaning “play well”.

48. Flo Ziegfeld offering : REVUE
Florenz Ziegfeld, Jr. was the man behind the series of theatrical revues called the “Ziegfeld Follies”, as well as the producer of the musical “Show Boat”. The “Follies” shows were structured as imitations of the “Folies Bergère” cabaret shows of Paris.