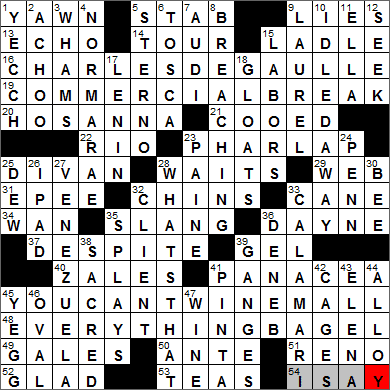 Today’s Wiki-est, Amazonian Googlies
5. Stick : STAB
“To stick” someone or something is to stab it.

9. “Debts and ___ are generally mixed together”: Rabelais : LIES
François Rabelais was a French writer and scholar during the Renaissance Period. Rabelais’ most famous work is “The Life of Gargantua and of Pantagruel“, a series of novels about father and son giants, Gargantua and Pantagruel.

16. His death prompted Georges Pompidou to say “France is a widow” : CHARLES DE GAULLE
Charles de Gaulle was a Brigadier General early in WWII and led one of the few successful counter-attacks against invading German forces during the Battle of France in 1940. He escaped to Britain, and from there encouraged the French populace to resist the occupation. By the end of the war he was leading the French government in exile, and when France was retaken he was named Prime Minister in the French Provisional Government. He resigned his position in 1946. Over a decade later he was elected as Prime Minister in 1958, and then President in 1959, an office he held until 1969. The main airport of Paris is named in his honor, as is the French navy’s only nuclear-powered aircraft carrier.

20. Church cry : HOSANNA!
“Hosanna” is derived from Hebrew, probably from the term “hoshi’ah-nna” meaning “save, we pray”.

22. Vegas casino that hosts the World Series of Poker, with “the” : RIO
The Rio casino in Las Vegas was opened in 1990, originally targeting the local population as it is located off the famous Strip where most of the tourists hang out. Famously, the Rio opened up the adults-only Sapphire Pool in 2008, a pay-to-enter (only men paid) topless pool club that featured music and dancers. A year later the Sapphire Pool was closed down after there were eleven arrests for drugs and prostitution offences during an undercover police operation.

23. Celebrated racehorse nicknamed “The Red Terror” : PHAR LAP
Phar Lap was a thoroughbred racehorse from New Zealand who competed all over the world during the Great Depression. The name “Phar Lap” comes from the Thai word for “lightning” and literally translates as “sky flash”. The horse had a number of nicknames, including “Wonder Horse”, “Big Red” and “Red Terror”.

25. Furniture usually with pillows : DIVAN
Ottomans and divans are essentially couches without backs or arms.

31. Light weapon : EPEE
The French word for sword is “épée”. In competitive fencing the épée is connected to a system that records an electrical signal when legal contact is made on an opponent’s body.

33. Pier 1 furniture material : CANE
Pier 1 Imports is a furniture retailer based in Fort Worth, Texas that was founded in 1962 in San Mateo, California.

35. Bad, for good : SLANG
In modern slang, something that’s really good might be described as “bad”. Go figure …

36. Singer Taylor : DAYNE
Taylor Dayne is the stage name of singer-songwriter Leslie Wunderman. Her best known record is probably “Tell It to My Heart”, released in 1988.

40. Jewelry chain : ZALES
The first Zales jewelry store was opened by Morris and William Zale and Ben Lipshy in Wichita Falls, Texas, in 1924. Zales became successful largely by offering credit to their customers, a revolutionary concept at the time.

41. Ultimate problem solver : PANACEA
Panacea was the Greek goddess of healing. She lent her name to the term “panacea” that was used by alchemists to describe the beguiling remedy that could cure all diseases and prolong life indefinitely.

48. Loaded roll : EVERYTHING BAGEL
The bagel was invented in the Polish city of Kraków in the 16th century. Bagels were brought to this country by Jewish immigrants from Poland, who mainly established homes in and around New York City.

49. They rate high on the Beaufort scale : GALES
The Beaufort wind scale is named after Irishman, Sir Francis Beaufort, a Rear-Admiral in the Royal Navy. Beaufort was a hydrographer as well as a career navy man.

51. Terminus of the old Virginia and Truckee Railroad : RENO
Reno, Nevada was named in honor of Major General Jesse Lee Reno, a Union officer killed in the Civil War. The city has a famous “Reno Arch”, a structure that stands over the main street. The arch was erected in 1926 to promote an exposition planned for the following year. After the expo, the city council decided to keep the arch and held a competition to decide what wording should be displayed, and the winner was “The Biggest Little City in the World”.

5. Pink fuel : STERNO
Sterno is a very useful product, a “jellied alcohol” that usually comes in a can. The can is opened and the contents burn very easily and persistently. The brand name “Sterno” comes from the original manufacturer, S. Sternau & Co. of Brooklyn, New York.

6. Opera with the aria “Recondita armonia” : TOSCA
Unlike so many operas, “Tosca” was a big hit right from day one, when it was first performed in 1900 at the Teatro Costanzi in Rome. “Tosca” is currently the eighth-most performed opera in America, although I’ve only seen it once myself.

7. Volkswagen subsidiary : AUDI
The Audi name has an interesting history. The Horch company was founded by August Horch in 1909. Early in the life of the new company, Horch was forced out of his own business. He set up a new enterprise and continued to use his own name as a brand. The old company sued him for using the Horch name so a meeting was held to choose something new. Horch’s young son was studying Latin in the room where the meeting was taking place. He pointed out that “Horch” was German for “hear” and he suggested “Audi” as a replacement, the Latin for “listen”.

“Volkswagen” translates from German into “people’s car”. The original Volkswagen was built under a directive from Adolf Hitler, who wanted a cheap car built that ordinary people could afford to purchase. He awarded the contract to engineer Ferdinand Porsche, whose name (paradoxically) would forever be associated with high-performance, expensive cars.

9. Daphne, after her mythical transformation : LAUREL
Daphne was one of the Naiads of Greek mythology, a female nymph living near freshwater fountains and springs. Daphne was a particularly beautiful Naiad and so was pursued by the god Apollo. Fearing Apollo’s advances, Daphne turned to her mother Haia for help. Gaia transformed her into a laurel tree, and as a result the laurel became sacred to Apollo.

11. “Phantom Lady” co-star Raines : ELLA
Ella Raines was a Hollywood film and television actress who was at the height of her career in the early 1940s.

17. Survivor of two 1918 assassination attempts : LENIN
Russian Communist leader Vladimir Lenin survived two serious assassination attempts, both of them in 1918, and both took place in his automobile. Lenin escaped injury in the first attempt, which took place in Petrograd. He was less fortunate in the second attempt, and took a bullet in the arm and a bullet in the jaw and neck.

23. “The American Crisis” pamphleteer : PAINE
Thomas Paine was an English author who achieved incredible success with his pamphlet “Common Sense” published in 1776 which advocated independence of colonial America from Britain. Paine had immigrated to the American colonies just two years before his pamphlet was published, and so was just in time to make a major contribution to the American Revolution.

24. One of the Colonial Colleges, informally : PENN
The University of Pennsylvania (Penn) was founded in 1740 by by Benjamin Franklin. Penn was the first school in the country to offer both graduate and undergraduate courses.

26. Paperless way to read the paper : IPAD
The very exciting iPad isn’t Apple’s first foray into the world of tablet computing. Apple created great buzz by introducing the Newton MessagePad way back in 1993. This innovative machine was fraught with problems and really died a very slow death, finally being withdrawn from the market in 1998.

27. Only founding member of OPEC not located in the Mideast : VENEZUELA
The country name of “Venezuela” originated with the Italian explorer Amerigo Vespucci. Vespucci saw stilt houses around Lake Maracaibo that reminded him of the city of Venice, leading him to call the region “Veneziola” meaning “Little Venice”. Over time, “Veneziola” evolved into “Venezuela” as a result of Spanish influence.

36. Summer Triangle star : DENEB
Deneb is the brightest star in the constellation called Cygnus, the Swan. The name “Deneb” comes from the Arabic word “dhaneb” meaning “tail”, as it lies at the tail of the swan.

39. River mentioned in the Rig Veda : GANGES
The Rigveda is a collection sacred hymns that is one of the four canonical texts of Hinduism known as the Vedas.

41. Historic caravel : PINTA
As we all know, Christopher Columbus used three ships in his first voyage across the Atlantic: the Santa Maria, the Niña and the Pinta. The Pinta was the fastest of the three, and it was from the Pinta that the New World was first spotted, by a sailor called Rodrigo de Triana who was a lookout on the fateful day. Pinta was a nickname for the ship that translated as “the painted one”. The Pinta’s real name has been lost in mists of time.

43. Tennis’s Dementieva : ELENA
Elena Dementieva is a Russian tennis professional, and winner of the gold medal at the 2008 Beijing Olympic Games.

45. One with a job opening? : YEGG
“Yegg” is a slang word for a burglar and often for a safe-cracker. The origin of the term appears to be unknown.