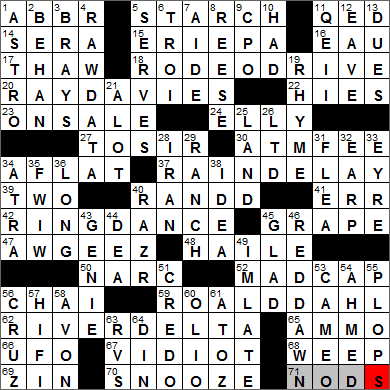 CROSSWORD SETTER: Tim Croce
THEME: R&D … each themed answer today is made up of two words beginning with R and D:

40A. Corporate division, informally … or a hint to the answers to the eight starred clues : R AND D

11. Proof ender : QED
QED is used at the end of a mathematical proof or a philosophical argument. The QED acronym stands for the Latin “quod erat demonstrandum” meaning “that which was to be demonstrated”.

15. Port ENE of Cleveland, O. : ERIE, PA
Erie is a city in the very north of Pennsylvania, right on the southern shore of Lake Erie. The city takes its name from the Erie Native American tribe that resided in the area.

16. Water, to Watteau : EAU
Jean-Antoine Watteau was a French painter whose work spanned the Baroque and Rococo periods.

20. *Lead singer of the Kinks : RAY DAVIES
Ray Davies is a rock musician from London who is best known as the lead singer and songwriter for the Kinks. Ray formed the Kinks with his brother Dave and led the group until it dissolved in 1996. In 2004, Davies pursued a purse snatcher in New Orleans and was shot in the leg for his trouble and sustained a serious injury.

“The Beverly Hillbillies” was a rags-to-riches sitcom that aired from 1962 to 1971, a creation of writer Paul Henning. Buoyed by the success of “Hillbillies”, Henning created another sitcom in 1965, one that was a complete opposite in terms of plot, the riches-to-rags story of “Green Acres”.

39. What it takes to tango : TWO
The dramatic dance called the tango originated in the late 1800s in the area along the border between Argentina and Uruguay.

40. Corporate division, informally … or a hint to the answers to the eight starred clues : R AND D
Research and Development (R&D)

42. *Hora, e.g. : RING DANCE
The hora (also “horah”) is a circle dance that originated in the Balkans. The hora was brought to Israel by Romanian settlers, and is often performed to traditional Israeli folk songs. The dance is a regular sight at Jewish weddings and at bar and bat mitzvahs. At such events, it is common for the honorees to be raised on chairs during the dance.

48. ___ Selassie : HAILE
Emperor Haile Selassie I ruled Ethiopia until he was removed from power in a revolution in 1974. Selassie died in 1975 under suspicious circumstances and it is widely believed that he was assassinated.

50. Traffic stopper? : NARC
“Narc” is a slang term for a law enforcement officer who tracks down criminals associated illegal drugs.

52. Like many a Mr. Bean skit : MADCAP
Mr. Bean is a famous comedic character created and performed by the marvelous English comedian Rowan Atkinson.

56. Tea variety : CHAI
Chai is a drink made from spiced black tea, honey and milk, with “chai” being the Hindi word for “tea”. We often called tea “a cup of char” growing up in Ireland, with “char” being our slang word for tea, derived from “chai”.

67. TV addict, slangily : VIDIOT
“Vidiot” is such a colorful term, a portmanteau of “video and “idiot”, which is used to describe someone obsessed with watching television or playing video games. The term was coined in 1957 by jazz musician and storyteller Ken Nordine who used as the title of song about a TV-addicted patient in a therapist’s office.

69. Fruity red wine, familiarly : ZIN
Zinfandel is my favorite red wine varietal. It amazes me that the rich and heavy red Zinfandel comes from the same grape as does the sweet White Zinfandel.

2. “Borstal Boy” author Brendan : BEHAN
Brendan Behan was an Irish writer and playwright. His most famous work is probably “Borstal Boy”, an autobiographical novel. Borstal is a term used in the British Isles for juvenile detention. Behan was quite a character, famous for being a heavy drinker (“a drinker with a writing problem”, as he described himself). The drink eventually put him in an early grave, at 41 years old. I used to walk to school in Dublin right past the pub where he spent many hours every day.

6. “Star Trek: T.N.G.” counselor : TROI
Deanna Troi is a character on “Star Trek: The Next Generation” who is played by the lovely Marina Sirtis. Sirtis is a naturalized American citizen and has what I would call a soft American accent on the show. However, she was born in the East End of London and has a natural accent off-stage that is more like that of a true Cockney.

8. Witherspoon of “Legally Blonde” : REESE
Reese is not actually actress Witherspoon’s given name. She started out life as Laura Jeanne Witherspoon. Reese is her mother’s maiden name.

9. Sharkey’s rank, in ’70s TV : CPO
“LEGALLY blonde” is a 2001 comedy film starring Reese Witherspoon as a girlish sorority president who heads to Harvard to earn a law degree. “LEGALLY blonde” was successful enough to warrant two sequels as well as a spin-off musical that is still playing in London’s West End.

11. Long-reigning English monarch, informally : QEII
Princess Elizabeth became queen Elizabeth II in 1952 when her father, King George VI died. The Princess was on an official visit to Kenya when her husband broke the news to her, that she had become queen. When she was crowned in 1953 in Westminster Abbey, it was the first coronation to be televised. Queen Elizabeth’s reign is currently the second longest in the history of the UK. She is closing in on the record of Queen Victoria who reigned longest, for almost 64 years.

19. Wynken or Blynken, e.g., but not Nod : RHYME
“Wynken, Blynken and Nod” is a children’s poem written by Eugene Field, first published in 1889. The original title of the work was “Dutch Lullaby”.

26. Inc. relative : LTD
In Britain and Ireland the most common type of business (my perception anyway) is one which has private shareholders whose liability is limited to the value of their investment. Such a company is known as a private limited company, and has the letters “Ltd” after the name. If the shares are publicly traded, then the company is a public limited company, and has the letters “plc” after the name.

28. Ayatollah’s home : IRAN
An Ayatollah is a high-ranking cleric in the Muslim faith, roughly equivalent to a Bishop or a Cardinal in the Roman Catholic tradition, or to a Chief Rabbi in Judaism.

32. Lawman Wyatt : EARP
Wyatt Earp is famous as one of the participants in the gunfight at the O.K. Corral. Earp was a city policeman in Wichita, Kansas and also in Dodge City, Kansas. Earp was also deputy sheriff in Tombstone, Arizona where the O.K. Corral gunfight took place. Years later, Earp joined the Alaska Gold Rush and with a partner built and operated the Dexter Saloon in Nome.

33. Literary Jane : EYRE
“Jane Eyre” is of course the novel written by Charlotte Brontë, under the pen name Currer Bell. Over the years, I’ve shared here on my blogs that the “Jane Eyre” story line is a little too dark and Gothic for my taste, but a very persuasive blog reader convinced me to look more at the romantic side of the story and give it a second chance. I watched a wonderful 4-hour television adaptation of the novel made by the BBC a while back and I have to say that because I was focused on the relationship between Jane and Rochester, I was able to push past the Gothic influences (that depress me) so I really enjoyed the story. I thoroughly recommend the 2006 BBC adaptation to fans of the novel.

34. Gillette brand : ATRA
Fortunately for crossword setters, the Atra razor was introduced by Gillette in 1977. The Atra was sold as the Contour in some markets and its derivative products are still around today.

40. Motorola cellphone : RAZR
The RAZR is a line of flip phones introduced by Motorola in 2004.

43. “Your wish is my command” speaker : GENIE
The “genie” in the bottle takes his or her name from “djinn”. “Djinns” were various spirits considered lesser than angels, with people exhibiting unsavory characteristics said to be possessed by djinn. When the book “The Thousand and One Nights” was translated into French, the word “djinn” was transformed into the existing word “génie”, because of the similarity in sound and the related spiritual meaning. This “génie” from the Arabian tale became confused with the Latin-derived “genius”, a guardian spirit thought to be assigned to each person at birth. Purely as a result of that mistranslation the word genie has come to mean the “djinn” that pops out of the bottle. A little hard to follow, I know, but still quite interesting …

44. Org. for 50-Acrosses : DEA
The Drug Enforcement Administration (DEA) was set up in 1973 while President Nixon was in office.

46. *1984 Patrick Swayze film set in the cold war : RED DAWN
“Red Dawn” is an interesting war film released in 1984 about a group of American high school students who resist an occupying force of Soviet allies who invade part of the US. The film’s cast includes Patrick Swayze, Charlie Sheen and Jennifer Grey. “Red Dawn” has the distinction of being the first movie to be released with an MPAA rating of PG-13.

49. Repeated cry from the White Rabbit : I’M LATE!
The White Rabbit is a character who appears at the very start of Lewis Carroll’s novel “Alice’s Adventures in Wonderland”. Alice sees the White Rabbit checking his watch and mumbling “Oh dear! Oh dear! I shall be too late!” Alice then follows him down the rabbit hole and into Wonderland.

53. Small screen appearance : CAMEO
Even in my day, a cameo role was more than just a short appearance in a movie (or other artistic piece). For the appearance to be a cameo, the actor had to playing himself or herself, and was instantly recognizable. With this meaning, it’s easy to see the etymology of the term, as a cameo brooch is one with the recognizable carving of the silhouette of a person. Nowadays, a cameo is any minor role played by a celebrity or famous actor, regardless of the character played.

54. “Arabian Nights” prince : AHMED
In the “Arabian Nights”, Prince Ahmed is noted for having a magic tent which would grow larger to shelter an army, and then grow small again so that it could fit into a pocket.

57. Old platter player : HI-FI
Hi-fi systems were introduced in the late forties, and is audio equipment designed to give a much higher quality reproduction of sound than cheaper systems available up to that point. “Hi-fi” of course stands for “high fidelity”.

58. “___ calling!” : AVON
In 1886, a young man called David McConnell was selling books door-to-door. To enhance his sales numbers he was giving out free perfume to the ladies of the houses that he visited. Seeing as his perfume was more popular than his books, he founded the California Perfume Company in New York City and started manufacturing and selling across the country. The company name was changed to Avon in 1939, and the famous “Avon Calling” marketing campaign was launched in 1954.

60. A little of this, a little of that : OLIO
Olio is a term meaning a hodgepodge or a mixture, coming from the mixed stew of the same name. The stew in turn takes its name from the Spanish “olla”, the clay pot used for cooking.