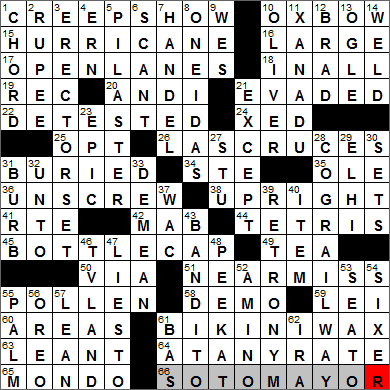 Today’s Wiki-est, Amazonian Googlies
Across
1. Stephen King horror anthology : CREEPSHOW
“Creepshow” is a 1982 horror film written by Stephen King (so I won’t be watching it!). The film is actually a collection of five different stories, loosely tied together. The “link” in the storyline is provided by a young boy named Billy who is reading horror comics. Billy is played by Joe King, Stephen King’s own son.

10. Yoke attachment : OXBOW
An oxbow is a wooden or metal frame that is U-shaped and which fits under the neck of an ox. A wooden yoke then accepts two oxbows, hence linking two oxen so that they can work as a team. The shape of the oxbow used by farmers gives us the term “oxbox lake” referring to a lake formed by a meandering river.

17. They’re available in alleys : OPEN LANES
Bowling has been around for an awfully long time. The oldest known reference to the game is in Egypt, where pins and balls were found in an ancient tomb that is over 5,000 years old. The first form of the game to come to America was nine-pin bowling, which had been very popular in Europe for centuries. In 1841 in Connecticut, nine-pin bowling was banned due to its association with gambling. Supposedly, an additional pin was added to get around the ban, and ten-pin bowling was born.

20. The King’s followers? : AND I
“The King and I” is a Rodgers and Hammerstein musical based on a book by Margaret Landon called “Anna and the King of Siam” first published in 1944. Landon’s book is based on a true story, told in the memoirs of Anna Leonowens. Leonowens was the governess of the children of King Mongkut of Siam in the 1860s, and she also taught the king’s wives.

26. Home of the Aggies of the 37-Down : LAS CRUCES
Las Cruces (Spanish for “the crosses”) is the second largest city in the state of New Mexico, and is the home of New Mexico State University.

38. Grand alternative : UPRIGHT
What was remarkable about the piano when it was invented, compared to other keyboard instruments, was that notes could be played with varying degrees of loudness. This is accomplished by pressing the keys lightly or firmly. Because of this quality, the new instrument was called a “pianoforte”, with “piano” and “forte” meaning “soft” and “loud” in Italian. We tend to shorten the name these days to just “piano”.

42. She plagues ladies’ lips with blisters, per Mercutio : MAB
In Shakespeare’s “Romeo and Juliet”, Mercutio refers to the fairy known as Queen Mab. It seems that Queen Mab was Shakespeare’s creation, although she became popular in subsequent works of literature. For example, she is referred to in Herman Melville’s “Moby Dick”, in Jane Austen’s “Sense and Sensibility”, and Percy Bysshe Shelley wrote a large poetic work called “Queen Mab: A Philosophical Poem”.

44. Game of falling popularity? : TETRIS
Tetris is a very addictive video game, developed in the Soviet Union in 1984. The name Tetris comes from a melding of the prefix “tetra-” (as all the game pieces have four segments) and “tennis” (a favorite sport played by the developer). Since 2005 there have been more than 100 million copies of the game installed on cell phones alone.

59. Floral arrangement : LEI
“Lei” is the Hawaiian word for “garland, wreath”, although in more general terms a “lei” is any series of objects strung together as an adornment for the body.

61. Painful spa treatment : BIKINI WAX
The origin of the name “bikini”, a type of bathing suit, seems very uncertain. My favorite story is that it is named after the Bikini Atoll, site of American A-bomb tests in the forties and fifties. The name “bikini” was chosen for the swim-wear because of the “explosive” effect it had on men who saw a woman wearing the garment!

66. Justice from the Bronx : SOTOMAYOR
In a 2001 speech addressing the need for stronger representation of the Hispanic community in the judiciary, future Supreme Court Justice Sonia Sotomayor made the remark:
I would hope that a wise Latina woman, with the richness of her experiences, would more often than not reach a better conclusion than a white male who hasn’t lived that life.
That line raised a few eyebrows, and was a topic of some discussion during her confirmation hearing. Discuss …

Down
2. Nepalese bread : RUPEE
The rupee is a unit of currency, used in India, Sri Lanka, Nepal and Pakistan.

3. Classic Meccano toy : ERECTOR SET
Oh how I loved my Erector Set as a kid. The version we used growing up was referred to as a Meccano set, as “Meccano” was the brand name used for for th toy sold as “Mechanics Made Easy”.

5. Embedded column : PILASTER
A pilaster is an architectural feature built into or applied to the face of a wall, designed to give the appearance of a supporting column.

7. Haydn’s “master of us all” : HANDEL
George Frideric Handel was the King of the Oratorio. Handel’s most famous oratorio is “Messiah”, which had its debut performance in Dublin, Ireland back in 1742.

Josef Haydn was an Austrian composer, often called the “Father of the Symphony” due to his prolific output of symphonies that helped define the form. Haydn was also the father figure among “the big three” composers of the Classical Period: Haydn, Mozart and Beethoven. Hayden was a good friend to Mozart, and a teacher of Beethoven.

8. Upstate New York natives : ONEIDAS
The Oneida people originally lived in the area that is now Central New York. The Oneida were one of the five founding nations of the Iroquois Confederacy, also known as the Five Nations (the Mohawk, Oneida, Onondaga, Cayuga and Seneca).

9. Unseld of the Bullets : WES
Wes Unseld is a former professional basketball player who spent his entire career playing with the Baltimore/Capital/Washington Bullets.

10. Twist in fiction : OLIVER
“Oliver Twist” is of course a novel by Charles Dickens. It is a popular tale for adaptation to the big screen. There are two silent film versions, released in 1909 and 1922, and the first talkie version was released in 1933, with many more to follow. The most successful movie is “Oliver!” from 1968, which is based on a musical adaptation for the stage by Lionel Bart. The latest “Oliver” for the big screen is a 2005 Roman Polanski production.

11. Hit soundtrack album of 1980 : XANADU
The title song of the 1980 movie “Xanadu” was performed by the Electric Light Orchestra (ELO) and Olivia Newton-John (who starred in the film). Despite the popularity of ELO around the world, the song “Xanadu” was the band’s only number one hit back in their homeland of the UK.

12. Stationery securer : BRAD
“Brad” is a name given to the brass fastener that is used to hold sheets of paper together. The brad is used by inserting it through holes punched in the paper, and then spreading out the two legs of the fastener.

27. Good name for a brooder? : STU
Someone who is broody might “stew”, and may even be called Stu …

28. How many reach the top of Pikes Peak : COG RAILWAY
The Manitou and Pike’s Peak Railway is a cog railway that takes passengers from close to Colorado Springs a distance of 8.9 miles up the famous mountain.

Zebulon Pike was an American Army officer and explorer. On his first expedition for the military he discovered a mountain in the Rockies that had been dubbed El Capitan by Spanish settlers. It was later renamed to Pike’s Peaks (now “Pikes Peak”) in honor of the explorer.

29. Not grade-specific : ELHI
“Elhi” is an informal word used to describe anything related to schooling from grades 1 through 12, i.e. elementary through high school.

31. Bellflower or Bell Gardens, vis-à-vis L.A. : BURB
Bellflower is a city and suburb of Los Angeles, California. The city’s name from the bellefleur apples which were grown locally in the early 1900s.

Bell Gardens is a city and suburb of Los Angeles. Bell Gardens takes its name from the adjoining city of Bell, California. The area used to be known as “Billy Goat Acres”, a name that is sometimes used even today.

39. “Cloth diaper” or “film camera” : RETRONYM
A retronym is a term used to distinguish between the current form of an object and the original form. For example, we tend to call the original guitar an “acoustic guitar” to differentiate it from today’s “electric guitar”. Similarly, we now say “cloth diapers” and “film cameras” when referring to the originals.

43. Frito ___ (old ad symbol) : BANDITO
The Frito Bandito was a mascot for Fritos corn chips from 1967 to 1971. On television, Frito’s voice was provided by the great Mel Blanc, the same man who voiced Speedy Gonzales, Bugs Bunny and so many other cartoon characters.

The Frito Corporation was started in 1932 by Elmer Doolin, basically in his mother’s kitchen. Doolin paid $100 for a corn chip recipe from a local restaurant and started producing Fritos at the rate of 10 pounds per day.

46. Cable channel with the slogan “Laugh More” : TV LAND
TV Land is a cable television channel that debuted in 1996. “TV Land” is a name that was used by Nick at Nite in the eighties, and is a term originally coined by “The Rocky and Bullwinkle Show”.

52. Certain building block, informally : AMINO
Amino acids are essential to life in many ways, not least of which is their use as the building blocks of proteins.

53. Former defense grp. : SEATO
The Southeast Asia Treaty Organization (SEATO) was set up in 1954, a defense organization with the mission to block communist influence growing in Southeast Asia. The driving force behind the organization’s creation was President Eisenhower’s Secretary of State, John Dulles. The list of SEATO members included Australia, France, the Philippines, the UK and the US. The organization was never really considered effective and it fell apart in 1977 largely due to a lack of interest by the members.

54. Knick foe : SIXER
The Phildephia 76ers basketball team is one of the oldest franchises in the NBA. The Sixers were formed in 1946 as the Syracuse Nationals. The team moved to Philadelphia in 1963, and the name 76er was chosen in a fan contest, a name that honors the men who fought for the country’s independence in 1776.

56. ___ Biscuit (1912 debut) : OREO
The Oreo was the best-selling cookie in the 20th century, and almost 500 billion of them have been sold since they were introduced in 1912 by Nabisco. In those early days the creme filling was made with pork fat, but today vegetable oils are used instead. If you take a bite out of an Oreo sold outside of America you might notice a difference from the homegrown cookie, as coconut oil is added in the overseas version to give a different taste.

61. Low, in Lyon : BAS
The city of Lyon in France, is also known as Lyons in English.