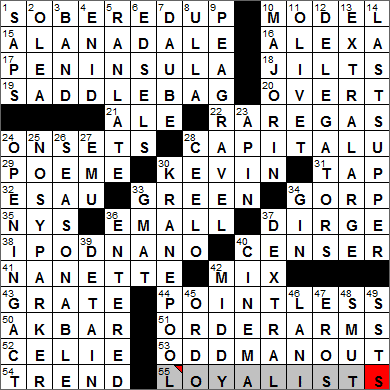 16. TV host Chung : ALEXA
Alexa Chung is a television presenter from England who now is pursuing a career in the US. These days, she can be seen on MTV. So, I won’t be spotting her any time soon …

17. Asia Minor, e.g. : PENINSULA
Asia Minor is also known as Anatolia. It is the geographic part of Asia that protrudes out into the west, towards Europe, and is roughly equivalent to modern-day Turkey.

18. Dumps : JILTS
To “jilt” someone with whom you have a relationship is to drop them suddenly or callously. “Jilt” is an obsolete noun that used to mean “harlot” or “loose woman”.

22. One highly unlikely to react : RARE GAS
The noble gases (also “rare gases”) are those elements over on the extreme right of the Periodic Table. Because of their “full” complement of electrons, noble gases are very unreactive. The six noble gases that occur naturally are helium, neon, argon, krypton, xenon and radon.

32. He was born “all over like an hairy garment” : ESAU
Esau, was the grandson of Abraham and the twin brother of Jacob, the founder of the Israelites. When Esau was born, the event was described, “Now the first came forth, red all over like a hairy garment”. Esau is portrayed later in life as being very different from his brother, as a hunter and someone who loves the outdoor life.

34. Trail rider’s concoction : GORP
“Gorp” is the name sometimes used for trail mix, particularly by hikers. It’s not really known for sure how this name came about, but some say it stands for “good old raisins and peanuts” or perhaps “gobs of raw protein”.

35. Gov. Cuomo’s purview : NYS
Andrew Cuomo won the gubernatorial election for the State of New York in 2010. Andrew is the son of former Governor of New York, Mario Cuomo. Andrew was also married for 13 years to Kerry Kennedy, a daughter of Robert F. Kennedy.

37. Slow march, maybe : DIRGE
An elegy is a mournful poem or funeral song, also known as a dirge. Perhaps the most famous elegy in the English language is that written by Thomas Gray, completed in 1750. His “Elegy Written in a Country Churchyard” is the source of many oft-quoted phrases, including:

38. Player in a pocket : IPOD NANO
The iPod Nano is the successor to the iPod Mini and was introduced to the market at the end of 2005. There have been five versions of the Nano to date and the current Nano as well as playing tunes is an FM player, records voice memos, and even has a pedometer!

40. Holy smoker? : CENSER
A censer is a vessel in which incense is burned during religious services.

50. “Allahu ___” (Iraqi flag phrase) : AKBAR
The Iranian flag in use today was adopted in 1980, a product of the Iranian Revolution. The flag is a tricolor composed of horizontal bands of green, white and red. Included in the green and red bands are the repeated words “Allahu Akbar”, which translates as “God is great”.

53. One who doesn’t click in a clique : ODD MAN OUT
A “clique” is a small, exclusive group of people. The term of course comes to us from France, where it has the same meaning. In French it somehow evolved in meaning from the original “clique” meaning a sharp noise, or as we would say today, a “click”.

Down
2. Olive genus : OLEA
Oleum (plural: olea) is the Latin word for “oil”. The term oleum is used for a whole host of pharmaceutical oils, extracted from both plant and animal sources.

4. Old-time actress Bennett : ENID
Enid Bennett was an actress from Australia who made a name for herself in the age of silent movies. Bennett’s most famous role was Maid Marian in 1922, which she played opposite Douglas Fairbanks.

6. Ill-fated line of the 1950s : EDSELS
It was Henry Ford’s son Edsel who gave his name to the Edsel brand of automobile, a name that has become synonymous with “failure”.

“The Producers” is a 1968 satirical movie written and directed by Mel Brooks, the first film he ever directed. Brooks adapted the movie into a hugely successful Broadway musical that won a record 12 Tony Awards. The original leads in the stage show, Nathan Lane and Matthew Broderick, then appeared in a 2005 movie adaptation of the musical version of the original film!

11. Biblically named Michigan college : OLIVET
Olivet College in Olivet, Michigan opened to students in 1844. The school is affiliated with the United Church of Christ.

14. Common religious artwork : LAST SUPPER
Leonardo da Vinci’s famous mural “The Last Supper” can be seen on an end wall of the dining hall in the monastery of Santa Maria delle Grazie in Milan, Italy. If you want to see it in person, you have to make a reservation ahead of time, and once you get there, you’re only allowed 15 minutes viewing time. The mural is a very, very popular tourist attraction …

27. Source of 13-Down eggs : EMU
Emu eggs are very large, with a thick shell that is dark-green in color. One emu egg weighs about the same as a dozen chicken eggs.

28. With 33-Across, “The Voice” vocal coach : CEE LO
33. See 28-Down : GREEN
Cee Lo Green is the stage name of rapper Thomas DeCarlo Callaway. Apparently Green is one of the coaches for the contestants on the singing TV show “The Voice”. That’s all I need to know …

30. Ed whose entire 18-season career was with the Mets : KRANEPOOL
Ed Kranepool is a former Major League Baseball player who spent his entire career with the New York Mets. Kranepool was a member of the team known as the “Miracle Mets” who won the 1969 World Series. He hit a homerun in game 5 of the series.

33. Common B-school requirement : GMAT
A “B-school” is a business school.

34. Spirit in a sling : GIN
A sling is a cocktail made of brandy, whiskey or gin, sweetened and flavored with lemon. The most famous version of the sling is the Singapore Sling, invented by a bartender at the Raffles Hotel in Singapore. I am proud to report that I once had a Singapore Sling in Raffles Hotel, many moons ago …

36. In the log, say : ENTERED
The word “logbook” dates back to the days when the captain of a ship kept a daily record of the vessel’s speed, progress etc. using a “log”. A log was a wooden float on a knotted line that was dropped overboard to measure speed through the water.

37. Right-handed : DEXTRAL
Someone or something described as “sinistral” is left-handed. Someone right-handed is “dextral”.

45. Great Seal word : ORDO
The Latin phrase “novus ordo seclorum” means “new order of the ages”. These words appear on the reverse of the Great Seal of the United States, a device used to authenticate some US federal documents. “Novus ordo seclorum” also appears on the back of one-dollar bills. The phrase itself is lifted from one of the works of the ancient Roman poet Virgil.

49. Former faves of jet-setters : SSTS
The most famous Supersonic Transport (SST) was the Concorde, a plane that’s no longer flying. Concorde had that famous “droop nose”. The nose was moved to the horizontal position during flight to create the optimum aerodynamic shape thereby reducing drag. It was lowered during taxi, takeoff and landing, so that the pilot had better visibility. The need for the droop nose was driven largely by the delta-shaped wings. The delta wing necessitates a higher angle of attack at takeoff and landing than conventional wing designs, so the pilot needed the nose lowered so that he or she could see the ground.