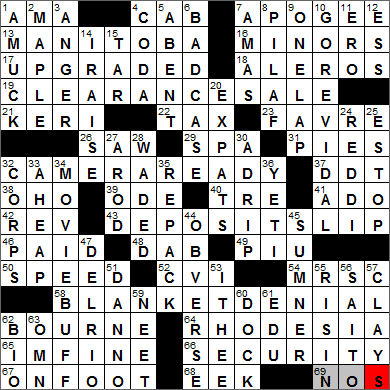 CROSSWORD SETTER: Samuel A. Donaldson
THEME: Security First … each of today’s themed answers starts with a word that often comes after the word SECURITY:

19A. Department store superevent : CLEARANCE SALE (from “security clearance”)
32A. Like photographable copy : CAMERA-READY (from “security camera”)
43A. Part of a stack at a bank : DEPOSIT SLIP (from “security deposit”)
58A. “These allegations are completely false!,” e.g. : BLANKET DENIAL (from “security blanket”)
66A. Mall cop’s job … or a word that can precede the starts of 19-, 32-, 43- and 58-Across : SECURITY

Today’s Wiki-est, Amazonian Googlies
Across
1. Org. founded by Dr. Nathan Smith Davis : AMA
The American Medical Association (AMA) was founded in 1847 at the Academy of Natural Sciences in Philadelphia. The first female member was allowed to join the AMA in 1868, but the first African American members weren’t admitted until one hundred years later, in 1968.

7. Orbital high point : APOGEE
In the celestial world, an apsis is a point in an orbit when the orbiting body is at its greatest, or least, distance from it’s center of orbit. The farthest and closest points of orbit are known as the apogee and perigee, when talking about bodies orbiting the Earth. The farthest and closest points for bodies orbiting the sun are known as the aphelion and perihelion.

13. Minnesota neighbor : MANITOBA
Manitoba is the Canadian province that borders the US states of North Dakota and Minnesota. Even though Manitoba has an area of over 250,000 square miles, 60% of its population resides in the province’s capital city of Winnipeg.

21. Russell of “Felicity” : KERI
The TV drama called “Felicity” stars Keri Russell in the title role of Felicity Porter, and ran from 1998 to 2002. One of Felicity’s classmates is Elena Tyler, played by Tangi Miller. I am afraid I have never seen this one …

23. Brett on the gridiron : FAVRE
Brett Favre is best known as the former starting-quarterback for the Green Bay Packers, and now plays for the Minnesota Vikings. Among the many NFL records held by Favre, he has thrown the most career touchdown passes, and has made the most consecutive starts.

29. Reflexologist’s place : SPA
Reflexology is an alternative medicine that involves the application of pressure to specific zones on the feet, hands and ears in order to effect a physical change in the body. The basic idea behind reflexology is that every part of the body is reflected in a zone on the soles of the feet or palms of the hand.

31. Items thrown in Three Stooges shorts : PIES
If you’ve seen a few of the films starring “The Three Stooges” you’ll have noticed that the line up changed over the years. The original trio was made up of Moe and Shemp Howard (two brothers) and Larry Fine (a good friend of the Howards). This line up was usually known as “Moe, Larry and Shemp”. Then Curly Howard replaced his brother when Shemp quit the act, creating the most famous trio, “Moe, Larry And Curly”. Shemp returned when Curly had a debilitating stroke in 1946, and Shemp stayed with the troupe until he died in 1955. Shemp was replaced by Joe Besser, and then “Curly-Joe” DeRita. When Larry Fine had a stroke in 1970, it effectively marked the end of the act.

37. E.P.A.-banned substance : DDT
DDT is dichlorodiphenyltrichloroethane (don’t forget now!). DDT was used with great success to control disease-carrying insects during WWII, and when made available for use after the war it became by far the most popular pesticide. And then Rachel Carson published her famous book “Silent Spring”, suggesting there was a link between DDT and diminishing populations of certain wildlife. It was the public outcry sparked by the book, and reports of links between DDT and cancer, that led to the ban on the use of the chemical in 1972. That ban is touted as the main reason that the bald eagle was rescued from near extinction.

39. Words from Wordsworth : ODE
The great English poet William Wordsworth lived in the Lake District in the north of England, a beautiful part of the country. I’ve been fortunate enough to visit Dove Cottage in Grasmere a couple of times, where Wordsworth lived with his wife Dorothy.

Rev. Jesse Jackson is a civil rights activist and Baptist minister from Greenville, South Carolina. Jackson twice ran unsuccessfully for the Democratic nomination for US president, in 1984 and 1988.

62. Three-time title role for Matt Damon : BOURNE
“The Bourne Identity” is a great spy novel written by Robert Ludlum, first published in 1980. It has been ranked as the second best spy novel of all time, just behind the even more enjoyable “The Spy Who Came in from the Cold” by John le Carre. Ludlum wrote two sequels, and all three parts of “The Bourne Trilogy” have been made into very successful movies starring Matt Damon in the title role. Ludlum died before he could write more than three novels featuring Jason Bourne, but five more titles in the series have been published, written by Eric Van Lustbader. I must check them out …

64. Zimbabwe, once : RHODESIA
The country now known as Zimbabwe started out as a British colony called Southern Rhodesia, named after Cecil Rhodes the British empire builder.

69. Primes, e.g.: Abbr. : NOS
A prime number is a number greater than 1 that can only be divided evenly by 1 and itself. There are still some unanswered questions involving prime numbers, perhaps most notably Goldbach’s Conjecture. This conjecture dates back to the 1740s and is assumed to be true, but has never been proven. It states that every even integer greater than 2 can be expressed as the sum of two prime numbers.

Down
1. In a frenzy : AMUCK
The phrase “to run amok” (sometimes “to run amuck”) has been around since the 1670s and is derived from the Malay word for “attacking furiously”, “amuk”. The word “amok” was also used as a noun to describe Malay natives who were “frenzied”. Given Malaya’s troubled history, the natives probably had good reason for that frenzy …

2. Bat wood : MAPLE
Most wooden baseball bats are made out of ash. Bats are also made of maple, although maple bats are falling out of favor due to a tendency for them to shatter.

4. Musical ending : CODA
In music, a coda is primarily a passage that brings a movement to a conclusion. “Coda” is Italian for “tail”.

8. Rice dish : PILAF
Pilaf is a Persian word, and we use it to describe rice that is browned in oil and then cooked in a seasoned broth.

10. “1876” novelist : GORE VIDAL
Gore Vidal was an author and political activist from West Point, New York. Vidal’s most celebrated novel is probably “Myra Breckinridge”. His most controversial work has to be “The City and the Pillar” from 1948, which is cited as one of the first major novels to feature unambiguous homosexuality.

11. Ranch addition? : -ERO
A ranchero is one employed on a ranch and is a word with Spanish roots.

12. Slalom figure : ESS
Slalom is an anglicized version of the Norwegian word “slalam” that translates as “skiing race”.

25. Bar, legally : ESTOP
The legal term “estop” means to block or stop by using some legal device. The word “estop” comes from Old French, in which “estopper” means “to stop up” or “to impede”.

32. U.S.M.C. part : CORPS
The US Marine Corps is one of the seven federal uniformed services, namely:

33. Oodles : A HEAP
It’s thought that the term “oodles” comes from “kit and caboodle”.

36. Himalayan legend : YETI
A yeti is a beast of legend, also called an abominable snowman. “Yeti” is a Tibetan term, and the beast is fabled to live in the Himalayan regions of Nepal and Tibet. Our equivalent legend in North America is that of Bigfoot, also known as Sasquatch. The study of animals whose existence have not yet been substantiated is called cryptozoology.

44. “Heads,” to a numismatist : OBVERSE
One meaning of the word “obverse” is “the side turned towards the observer”. This led to the use of obverse to describe the side of a coin bearing the principal image or design.

A numismatist is a coin collector. The term “numismatics” comes into English via French from a Latin word for coin: “nomisma”.

45. Gordon ___ (Sting’s real name) : SUMNER
Sting is the stage name used by Gordon Sumner, who came to fame initially as the lead singer for The Police. Off stage, Sting is an avid chess player, and he once participated in an exhibition game with chess grandmaster Garry Kasparov.

47. Texas border city : DEL RIO
Del Rio is a border city in Texas, sitting opposite the Ciudad Acuña in the Mexican state of Coahuila. Del Rio was chosen as the site for Laughlin Air Force Base back in the forties. It was closed after a few years, but reopened during the Cold War mainly for flight training. Laughlin is now the busiest flight training base in the US Air Force.

51. “Hawaii Five-O” nickname : DANNO
Danny Williams is a character on the TV show “Hawaii Five-O”, both in the original version that first aired in 1968 and in the remake that was first broadcast in 2010. The original, “Danno” was played by James McArthur. In the remake, Danno is played by Scott Caan, son of Hollywood actor James Caan.

55. “Mr. Mojo ___” (repeated Doors lyric) : RISIN’
Jim Morrison was the lead singer for the Doors. Famously, Morrison died at only 27 years of age in Paris. It is thought that his dependence on hard drugs contributed to his demise, although this is disputed. Morrison’s grave site is one of the most-visited attractions in Paris. Morrison was also known as “Mr. Mojo Risin'”, which is an anagram of “Jim Morrison”. “Mr. Mojo Risin’” is also a repeated lyric in the Doors hit “L.A. Woman”.

56. Japanese colonel in “The Bridge on the River Kwai” : SAITO
The river referred to in the movie (and novel) “The Bridge on the River Kwai” is actually called the Khwae Yai River, and is in western Thailand. The original novel by Pierre Boulle was published in French in 1952, and the wonderful movie released in 1957. Both tell the story of construction of part of the Burma Railway and a bridge over the river, using prisoners of war as laborers. The film stars William Holden, Alec Guinness and Jack Hawkins.

59. Classic depilatory brand : NEET
The hair removal product Neet was launched in Canada in 1901, and was also sold as Immac. Today Neet is sold under the name Veet.

61. End of a professor’s address? : EDU
The .edu domain was one of the seven first generic top-level domains specified. The complete original list is:

62. Obit, essentially : BIO
“Obituary” comes from the Latin “obituaris”, originally the record of the death of a person, although the literal meaning is “pertaining to death”.

63. Every, in an Rx : OMN
“Omni” is Latin for “all”, or “every” in the context of a medical prescription. On a prescription, “omni” is usually abbreviated to “omn”.