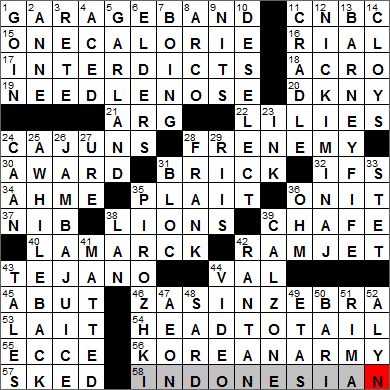 CROSSWORD SETTER: David Steinberg
THEME: None
COMPLETION TIME: Did not finish! Gave up after 70 minutes!
ANSWERS I MISSED: Too many to count, all on the bottom right-hand-side of the grid

Today’s Wiki-est, Amazonian Googlies
Across
1. Best-selling Apple app : GARAGEBAND
Garageband is an application for Apple products that is used to create music. Garageband is part of the iLife software package on OS X.

16. Currency whose name can become its country’s name by changing its last letter to an N and scrambling : RIAL
The “Rial” is name of the currency of Iran (as well as Yemen, Oman, Cambodia and Tunisia).

18. Prefix with phobia : ACRO-
Our prefix “acro-” comes from the Greek “akros” meaning “at the top”. Examples are “acrophobia” (fear of heights) and “Acropolis” (“city at the top”).

19. Like some pliers : NEEDLE-NOSE
I use needle-nose pliers mainly for working with electrical wire, but they are great for getting into those awkward places, wire or no wire.

20. Fashion inits. : DKNY
Donna Karan is an American fashion designer, creator of the DKNY clothing label. Karan was very much raised in the fashion industry, as her mother was a model and her stepfather a tailor.

21. O.A.S. member : ARG
The Organization of American States (OAS) has its headquarters in Washington, D.C. All the independent states in the Americas are members of the group except Honduras, which had its membership suspended after the country’s 2009 coup.

24. Some Southerners : CAJUNS
The great explorer Verrazzano gave the name “Arcadia” to the coastal land that stretched from north of present day Virginia right up the North American continent to Nova Scotia. The name Arcadia was chosen as it was also the name for a part of Greece that had been viewed as idyllic from the days of classical antiquity. The “Arcadia” name quickly evolved into the word “Acadia” that was used locally here in North America. Much of Acadia was settled by the French in the 1600s, and then in 1710 Acadia was conquered by the British. There followed the French and Indian War after which there was a mass migration of French Acadians, often via the French colony of Saint-Dominique (present-day Haiti) to the French colony of Louisiana. The local dialectic pronunciation of the word “Acadian” was “Cajun”, giving the name to the ethnic group for which Louisiana has been home for about 300 years.

28. Supporter to keep a watchful eye on : FRENEMY
A frenemy is someone who feigns friendship but who is actually an enemy or competitor.

37. Point of writing : NIB
“Nib” is a Scottish variant of the Old English word “neb”, with both meaning the beak of a bird. This usage of “nib” as a beak dates back to the 14th century, with “nib” meaning the tip of a pen or quill coming a little later, in the early 1600s.

42. Powerful engine : RAMJET
A ramjet is a type of jet engine that uses the speed of the incoming air (due to the aircraft’s forward motion) to compress that air prior to combustion. In a regular jet engine, the air is compressed by a fan that sucks air into the combustion chamber. In a ramjet, air enters the chamber usually at supersonic speed (the speed of the jet) and is slowed prior to combustion. In a scramjet, a variant of a ramjet, the air is maintained at supersonic speeds, allowing the scramjet to operate at very high velocity.

43. Music style of La Mafia : TEJANO
Tejano is the Spanish word for “Texan”. Tejano music is strongly influenced by Cajun culture, because of the proximity of Texas to Louisiana. The other strong influence came with immigrants from the Poland and what is now the Czech Republic. These immigrants brought with them the waltz, polka … and the accordion.

La Mafia is a musical group from Houston, Texas.

44. ___-de-Marne (department near Paris) : VAL
Val-de-Marne is department of France located southeast of Paris that takes its name from the Marne river.

Unlike sterilization, pasteurization does not kill off all microbes, but instead reduces their number so that a food is unlikely to cause disease or to spoil. Pasteurization involves heating a food to a defined temperature for a defined time and then immediately cooling it. The modern process was of course created by the French chemist Louis Pasteur, after whom the technique is named. Pasteur’s original aim was to prevent wine and beer from going sour.

The Colosseum of Rome was the largest amphitheater in the whole of the Roman Empire in its day, and could seat about 50,000 people. The structure was originally called the “Amphitheatrum Flavium” but the name changed to “Colosseum” when a colossal statue of Emperor Nero was located nearby.

58. Like Barack Obama’s early schoolmates : INDONESIAN
President Barack Obama’s parents met while studying at the University of Hawaii and were married in Hawaii in 1965. Obama’s mother was from Kansas, and his father was from Kenya. The president’s parents divorced when he was three years old. President Obama’s mother then met a graduate student at the University of Hawaii who was from Indonesia, and she eventually remarried. The family eventually relocated to Indonesia where Barack Obama attended Indonesian-language school from ages six to ten years, before returning to Hawaii.

3. Bundle of nerves : RETE
A rete is an anatomical term for a network. The network can be nerves, but also fibers or blood vessels. The word rete is Latin for “net” and was the name for the net that gladiators used as a weapon when fighting in the arena in Ancient Rome.

5. Anadem : GARLAND
An anadem is a wreath or garland worn around the head, derived from the Greek word for “to bind up”.

8. Western gas brand : ARCO
ARCO stands for the Atlantic Richfield Company. One of ARCO’s claims to fame is that it is responsible for the nation’s largest Superfund site. Mining and smelting in the area around Butte, Montana polluted the region’s water and soil, and ARCO have agreed to pay $187 million to help clean up the area.

12. Singer with the platinum album “Pink Friday” : NICKI MINAJ
Nicki Minaj is a rapper from Queens, New York who was born in Trinidad.

14. Sugar sometimes does it : CLOYS
To cloy is to cause distaste of oversupplying something that would otherwise be unpleasant, especially something with a sweet taste.

24. “Thief” star, 1981 : CAAN
James Caan is an actor from the Bronx in New York City. Caan is noted for his appearances in some very big movies such as “The Godfather”, “Misery”, “A Bridge Too Far”, “Rollerball” and more recently “Elf”. Caan is quite the sportsman. He plays golf with an 8 handicap, and is a 6-Dan Black Belt Master of Gosoku Karate.

John Seybold was a jewel thief, turned novelist. Under the pen name, Frank Hohimer, he wrote “The Home Invaders: Confessions of a Cat Burglar”. This novel was the basis for the 1981 movie “Thief” starring James Caan. Seybold actually worked on the set of”Thief” as a technical advisor, even though he had FBI warrants outstanding. His past eventually caught up with him, and Seybold served time in a New Jersey prison from 1995 to 2001.

26. California-based smoothie chain : JAMBA JUICE
The Jamba Juice chain of stores was founded in 1990 in San Luis Obispo, California and now has outlets across much of the US and as far as the Philippines and South Korea. My young neighbor made extra money right through college working at a Jamba Juice store in his college town …

29. “The Battle With the Slum” writer : RIIS
Jacob Riis is famous for his photographs and newspaper articles that highlighted the plight of the impoverished in New York City. He wrote “How the Other Half Lives”, originally an extensive article that appeared in “Scribner’s Magazine” at Christmas 1889. The article had such an impact that Riis was commissioned to expand it into a book, which was published the following year.

33. Reinstate, in a way : STET
“Stet” is the Latin word meaning “let it stand”. In editorial work, the typesetter is instructed to disregard any change previously marked by writing the word “stet” and then underscoring that change with a line of dots or dashes.

35. Small meat-stuffed pastries : PIROZHKI
A pirozhki is a baked or fried, filled bun. The term “pirozhki” is Russian for “little pirogs”, with a “pirog” being a pie from Eastern Europe with a sweet or savory filling.

36. Bit of resistance : OHM
The unit of electrical resistance is the ohm (with the symbol omega) named after German physicist Georg Simon Ohm. Ohm was the guy who established experimentally that the amount of current flowing through a circuit is directly proportional to the voltage applied, (V=IR) a relationship that every school kid knows as Ohm’s Law.

38. Certain computer grouping, for short : LAN
You may have a Local Area Network (LAN) in your house. If you’ve got a PC and a router or switch, likely attached to some modem, then you have a LAN.

39. Trattoria selection : CALZONE
A calzone is like a pizza but with the dough base folded in half, forming a semi-circle.

42. Banging noise : RAN-TAN
“Ran-tan” is a knocking or pounding noise, and is a word that canalso be used to mean “riotous conduct”.

47. Part of the earth’s history : AEON
Aeon is a variant spelling of “eon”. In astronomical terms, an aeon is defined as one thousand million years.

48. Reddish-brown quartz : SARD
Sard is a reddish-brown gem that is often referred to as Carnelian, although generally sard is harder and darker. Sard probably takes its name from the Persian word “sered” meaning yellowish-red.

49. H’s : ETAS
Eta is the seventh letter of the Greek alphabet, and is a forerunner of our Latin character “H”.

50. Adriatic seaport : BARI
Bari is a major port city on the Adriatic coast of Italy. Bari has the unfortunate distinction of being the only city in Europe to experience chemical warfare during WWII. Allied stores of mustard gas were released during a German bombing raid on Bari in 1943. Fatalities caused by the chemical agent were reported as 69, although other reports list the number as maybe a thousand military personnel and a thousand civilians.

52. Kirk ___, first actor to play Superman on the big screen : ALYN
Kirk Alyn was the actor who played the title role in the first ever “Superman” movie, way back in 1948. Alyn reprised the role in a 1950 sequel called “Atom Man V. Superman”.