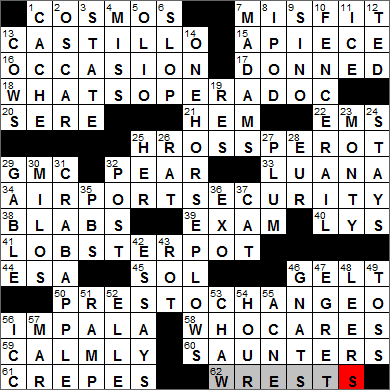 CROSSWORD SETTER: Jeffrey Wechsler
THEME: Presto, It’s Hidden … each of the themed answers contains an anagram of the word PRESTO:

Today’s Wiki-est, Amazonian Googlies
Across
18. Classic cartoon in which “Kill da wabbit” is sung to a Wagner tune : WHAT’S OPERA DOC?
“What’s Opera, Doc?” is one of my favorite cartoons of all time. It’s all about Elmer Fudd chasing Bugs Bunny to musical extracts from Wagnerian operas. The most famous line from the cartoon if “Kill the Wabbit”, which Elmer sings to the main theme from “Ride of the Valkyries”. “What’s Opera, Doc?” cost Warner Bros. about six times as much as any other cartoon the studio had produced up to that time.

25. Onetime presidential candidate on the Forbes 400 list : H ROSS PEROT
Henry Ross Perot was ranked number 101 on the Forbes 400 List of Richest Americans in 2012, and at that time was worth about $3.5 billion.

29. Yukon XL maker, for short : GMC
The GMC Yukon is basically the same vehicle as the Chevrolet Tahoe.

32. Compote ingredient : PEAR
A compote is a fruit mixture stewed in syrup. The word “compote” comes to us from French and has the same etymology as our word “compost”! “Composte” is an Old French word for “mixture”.

33. Child actress Patten of “Song of the South” : LUANA
Luana Patten was an actress from Long Beach, California. Patten’s best-known role was probably her first, playing young Ginny Favers in the 1946 Disney musical “Song of the South”.

“Song of the South” is a 1946 Disney film based on the Uncle Remus stories by Joel Chandler Harris. The move features a mix of live actors and animated characters. The song “Zip-a-Dee-Doo-Dah” is the big hit from the “Song of the South”, and won the Best Song Oscar in 1947.

38. Spills the beans : BLABS
“To spill the beans” is to divulge a secret. The expression first appeared in American English, in the early 1900s. The phrase arose as an alternative to “spoil the beans” or “upset the applecart”.

46. Hanukkah largesse : GELT
“Gelt” is the Yiddish word for “money”.

The term “Hanukkah” derives from the Hebrew for “to dedicate”. Hanukkah is a holiday lasting eight days that commemorates the rededication of the Holy Temple of Jerusalem after successful Jewish revolt against the Seleucids in the 2nd-century BCE.

56. Springer on African grasslands : IMPALA
“Impala” is the Zulu word for “gazelle”. When running at a sustained speed, gazelles can move along at 30 miles per hour. If needed, they can accelerate for bursts up to 60 miles per hour.

Down
2. When said three times, frequent line on “The Odd Couple” : OSCAR
“The Odd Couple” is a play by the wonderfully talented Neil Simon first performed on Broadway, in 1965. This great play was adapted for the big screen in 1968, famously starring Jack Lemmon (as Felix Unger) and Walter Matthau (as Oscar Madison). The success of the play and the film gave rise to an excellent television sitcom that ran from 1970-1975, starring Tony Randall and Jack Klugman. In 1985, Neil Simon even went so far as to adapt the play for an all-female cast, renaming it “The Female Odd Couple”. I’d like to see that one …

5. Diverse grouping : OLIO
Olio is a term meaning a hodgepodge or a mixture, coming from the mixed stew of the same name. The stew in turn takes its name from the Spanish “olla”, the clay pot used for cooking.

6. Haute cuisine by no means : SLOP
“Haute cuisine”, literally “high cooking” in French, is the name given to skillfully and elegantly prepared food, especially if it is in the French style.

8. ___ Touch : IPOD
The iPod Touch is a portable media player, personal digital assistant and gaming console with a WiFi capability. Essentially I think it’s a stripped-down version of an iPhone.

10. Product of Abe Lincoln’s wood splitting : FENCE RAIL
Before Abraham Lincoln was elected president, his political campaign used the nick-name “the Rail-Splitter” to emphasize his humble upbringing. Lincoln had worked at splitting fence rails in his youth.

12. ___ talks, offerers of “ideas worth spreading” : TED
The acronym TED stands for Technology Entertainment and Design. TED is a set of conferences held around the world by a non-profit group called the Sapling Foundation. The conference subjects are varied, and the meetings are often led by big names such as Bill Clinton, Al Gore, Bill Gates and Jane Goodall. The Sapling Foundation then makes recordings of the conferences available for free online with the intent of disseminating the ideas globally. These conferences are known as “TED Talks”.

13. Intimidates : COWS
The verb “to cow” means to intimidate, to scare. The exact etymology of the term seems unclear.

23. Hall of fame : MONTY
Monty Hall is the stage name of Canadian-born television personality Monte Halperin. Hall is perhaps best known as the longtime host of the game show “Let’s Make a Deal”.

28. Lux.’s place : EUR
Luxembourg is a relatively small country in the middle of Europe, just 100 square miles in area with a population of over half a million. The country is a representative democracy (just like the United Kingdom) and it has a constitutional monarch, namely Henri, Grand Duke of Luxembourg. As such, Luxembourg is the only remaining sovereign Grand Duchy in the world.

30. Director Forman : MILOS
Miloš Forman is a film director from former Czechoslovakia, where he learned his craft. Since starting to work in Hollywood in 1968, Forman has been at the helm of some memorable films including: “One Flew Over the Cuckoo’s Nest”, “Amadeus” and “The People vs. Larry Flynt”.

35. It has lots of pledges : PBS
The Public Broadcasting System (PBS) was founded in 1970, and is my favorite of the broadcast networks. I love PBS’s drama and science shows in particular, and always watch the election results coming in with the NewsHour team. PBS’s Big Bird from “Sesame Street” made a bit of a splash in the last election cycle …

36. Prefix with biology : EXO-
Exobiology is the study of life in the universe, and central to the work of exobiologists is the search for life beyond earth. A fascinating field, I would imagine …

47. Wetland denizen : EGRET
At one time the egret species was in danger of extinction due to excessive hunting driven by the demand for plumes for women’s hats.

53. Something placed in the mouth of a pitcher? : CHAW
A baseball pitcher might pop some “chaw” in his (or her) mouth.

56. Org. meting out justice at The Hague : ICC
The International Criminal Court (ICC) is based in the Hague, Netherlands. The court is used for the prosecution of war crimes, crimes against humanity and genocide. It was set up in 2002 by the United Nations, but not all UN members have ratified the treaty. Included in the list of UN members who refuse to recognize the ICC’s jurisdiction are India, China, Israel and the United States.