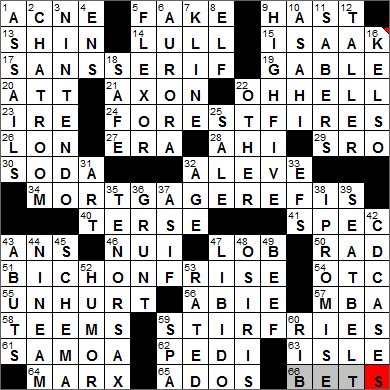 CROSSWORD SETTER: Jeff Chen
THEME: An Anagram at Last … the last part of each of today’s themed answers is an anagram of FRIES, as in “stir FRIES” perhaps:

Today’s Wiki-est, Amazonian Googlies
1. Side effect of steroid use : ACNE
Steroids are found commonly in nature, with familiar examples being cholesterol and testosterone. The controversial class of drugs called anabolic steroids (known informally as “roids” or simply “steroids”) are artificially produced chemicals designed to mimic the effect of the male sex hormone, testosterone. They are termed “anabolic” as they build up cellular tissue (particularly muscle) in a process called anabolism.

15. Rocker Chris : ISAAK
Chris Isaak is not only an American rock musician, but also has had a lot of acting parts. Isaak had small roles in movies like “Married to the Mob” and “The Silence of the Lambs”, but I remember him as astronaut Ed White in the fabulous HBO miniseries “From the Earth to the Moon”.

17. Undecorated type? : SANS-SERIF
Serifs are details on the ends of characters in some typefaces. Typefaces without serifs are known as sans-serif (using the French word “sans” meaning “without”). Some people say that serif fonts are easier to read on paper, whereas sans-serif fonts work better on a computer screen. I’m not so sure though …

19. Butler player of note : GABLE
As casting proceeded for the movie version of “Gone With the Wind”, Clark Gable was a shoo-in from day one. The role of Scarlett was considered very desirable in the acting community, with Bette Davis on the shortlist, and Katherine Hepburn demanding an appointment with producer David O. Selznick to discuss the role. Vivien Leigh was an unlikely contender, an English actress for the definitive Southern belle role. Selznick was adamant though, and stuck by his choice despite a lot of protests.

21. One acting on impulse? : AXON
A nerve cell is more correctly called a neuron, and the long nerve fiber that is part of a neuron is called the axon.

26. First name in horror : LON
Lon Chaney, Sr. played a lot of crazed-looking characters in the days of silent movies. He did much of his own make-up work, developing the grotesque appearances that became his trademark, and earning himself the nickname “the man of a thousand faces”. Most famous of all was his portrayal of “The Phantom of the Opera” in 1925.

32. Commercial name for naproxen : ALEVE
Aleve is a brand name for the anti-inflammatory drug Naproxen sodium.

40. Elliptical, in a way : TERSE
Something described as “elliptical” can be something so “terse, condensed, concise” that it can be considered “deliberately obscure”.

46. Rapa ___ (Easter Island) : NUI
Rapa Nui is the Polynesian name for what we are more likely to call Easter Island. The European name was coined by the Dutch explorer Jacob Roggeveen, who came across the island on Easter Sunday in the year 1722. Easter Island is inhabited, and is a location that is remarkably distant from neighboring civilization. The nearest inhabited island is Pitcairn Island, almost 1300 miles away.

56. Rose’s guy, on Broadway : ABIE
“Abie’s Irish Rose” was originally a Broadway play by Anne Nichols that opened in 1922 and ran for over five years, which back then was the longest run for any show in New York. The show then went on tour, and stayed on tour for an amazing 40 years.

59. Wok dishes : STIR-FRIES
“Wok” is a Cantonese word, the name of the frying pan now used in many Asian cuisines.

61. Western ___ : SAMOA
The official name for the South Pacific country formerly known as Western Samoa is the Independent State of Samoa. “Samoa” is the western part of the island group, with American Samoa lying to the southeast. The whole group of islands used to be known as Navigators Island, a name given by European explorers in recognition of the seafaring skills of the native Samoans.

64. Richard with the 1989 #1 hit “Right Here Waiting” : MARX
Richard Marx is a singer and songwriter who had a string of hits in the eighties and nineties. Marx was the first singer in history to have his first seven singles all break into the Billboard Top 5.

When Gene Roddenberry first proposed the science fiction series that became “Star Trek”, he marketed it as “Wagon Train to the Stars”, a pioneer-style Western set in outer space. In fact his idea was to produce something more like “Gulliver’s Travels”, as he intended to write episodes that were adventure stories on one level, but morality tales on another. Personally I think that he best achieved this model with the spin-off series “Star Trek: The Next Generation”. If you watch individual episodes you will see thinly disguised treatments of moral issues such as racism, homosexuality, genocide etc. For my money, “The Next Generation” is the best of the whole franchise …

6. Night light : AURORA
The spectacular aurora phenomenon is seen lighting up the night sky at both poles of the earth (the Aurora Borealis in the north, and the Aurora Australis in the south). The eerie effect is caused by charged particles colliding with atoms at high latitudes.

7. Oscar winner for “A Fish Called Wanda” : KLINE
The actor Kevin Kline stars in many of my favorite films, like “French Kiss” (in which he had a very impressive French accent) and “A Fish Called Wanda.” Kline also appeared in the romantic comedy “In & Out”, another favorite. “In & Out” is perhaps best remembered for it’s dramatic “interaction” between Kevin Kline and Tom Selleck … if you haven’t seen it yet, I won’t spoil it for you by saying any more!

I think that the 1988 comedy “A Fish Called Wanda” is very under-appreciated. The film was co-written by and stars John Cleese, and has an exceptional cast including Jamie Lee Curtis, Kevin Kline and Cleese’s friend from “Monty Python”, Michael Palin. The “fish” in the film is the con artist Wanda, played by Curtis.

10. Japanese beer brand : ASAHI
Asahi is a beer, and the name of the brewery that produces it. “Asahi” is Japanese for “morning sun”. Asahi introduced a “dry beer” in 1987, igniting a craze that rocketed the brewery to the number one spot in terms of beer production in Japan, with Sapporo close behind.

12. Like LeBron James vis-à-vis Kobe Bryant : TALLER
LeBron James plays basketball for the Miami Heat. James seems to be in demand for the covers of magazines. He became the first African American man to adorn the front cover of “Vogue” in March 2008. That made him only the third male to make the “Vogue” cover, following Richard Gere and George Clooney.

Kobe Bryant plays basketball for the LA Lakers. Kobe Bryant got his name from a menu would you believe? His parents were in a Japanese restaurant and liked the name of “Kobe” beef, the beef that comes from the area around the city of Kobe on the island of Honshu in Japan.

25. Point of ___ : SALE
A “point of sale” is an alternative term for a checkout, the place where a transaction is completed in a store.

36. McJob holder : GRUNT
“McJob” is a slang term for a low-paying position that offers little chance for advancement. The term of course comes from front-line jobs at a McDonald’s fast-food restaurant.

45. Conceptual framework : SCHEMA
A schema is an outline or a model. The plural of “schema” is “schemata” and the adjectival form is “schematic”.

47. A wolf has a strong one : LIBIDO
“Libido” is a term first popularized by Sigmund Freud. Freud’s usage was more general than is understood today, as he used “libido” to describe all instinctive energy that arose in the subconscious. He believed that we humans are driven by two desires, the desire for life (the libido, or Eros) and the desire for death (Thanatos). Personally, I don’t agree …

48. Underworld boss? : OSIRIS
Osiris was the Egyptian god of the underworld. Osiris was the son of Geb the Earth god, and Nut the sky goddess. His wife Isis was also his sister …

49. Kobe ___ : BEEF
Kobe is a city on the island of Honshu in Japan, and yes, basketball star Kobe Bryant is named after the Japanese city. The city of Kobe is perhaps most famous for its beef.