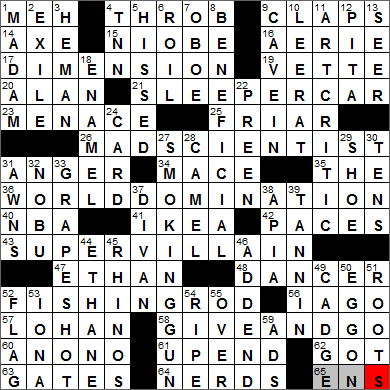 CROSSWORD SETTER: Josh Knapp
THEME: Really Bad Guys … we have a mini-theme today, with two answers referring to a third:

Today’s Wiki-est, Amazonian Googlies
Across
1. Verbal shrug : MEH
“Meh!” is one of those terms unfamiliar to me outside of crosswords. It is a modern colloquialism meaning “I’m not great, but not bad”.

14. Pointy-headed sort? : AXE
I guess the idea is that an axe has a pointy head.

15. Whom Turkey’s Weeping Rock is said to represent : NIOBE
In Greek mythology, when her children were killed, Niobe fled to Mt. Sipylus where she was turned into stone and wept for eternity. There is in fact a Niobe’s Rock on Mt. Sipylus that resembles a female face, and so is known as “The Weeping Rock”.

19. Autodom’s ZR1, for one : VETTE
The Chevrolet Corvette was introduced to the world in 1953, and was named after the small maneuverable warship called a corvette. The Corvette has legs. It is the only American sports car that has been around for over 50 years.

20. Writer Moore or Moorehead : ALAN
Alan Moore is an English writer of graphic novels, a term that Moore himself introduced in order to differentiate his work from “comic books”.

25. Brother : FRIAR
Friars and nuns differ from each other in that monks lived cloistered, self-sufficient lives that are very simple. Friars live simple lives in the service of a community, and depend on that community’s financial support.

41. Its products often have Allen wrenches included : IKEA
Did you know that IKEA was founded by Ingvar Kamprad in 1943 when he was just 17-years-old??!! IKEA is an acronym that stands for Ingvar Kamprad Elmtaryd Agunnaryd (don’t forget now!). Elmtaryd was the name of the farm where Ingvar Kamprad grew up, and Agunnaryd is his home parish in Sweden.

47. “My Name Is Earl” co-star Suplee : ETHAN
The actor Ethan Suplee is best-known for playing the title characters bumbling brother on the sitcom “My Name Is Earl”. Suplee recently slimmed down, achieving a total weight loss of over 200 pounds. Good for you, Ethan …

56. Victimizer of Cassio : IAGO
Iago is the schemer in Shakespeare’s “Othello”. Iago is a soldier who fought alongside Othello and feels hard done by, missing out on promotion. He hatches a plot designed to discredit his rival Cassio by insinuating that Cassio is having an affair with Desdemona, Othello’s wife. By the end of the play it’s Iago himself who is discredited and Othello (before committing suicide) apologizes to Cassio for having believed Iago’s lies. Heavy stuff …

57. “I Know Who Killed Me” star, 2007 : LOHAN
I think that actress Lindsay Lohan’s big break was in the Disney remake of “The Parent Trap” in 1998. I’ve really only enjoyed one of Lohan’s films though, “Freaky Friday” from 2003 in which she stars alongside the fabulous Jamie Lee Curtis.

“I Know Who Killed Me” is a horror film released in 2007 that stars Lindsay Lohan playing identical twins. Lohan also played identical twins in 1998’s remake of “The Parent Trap”.

64. The out crowd? : NERDS
Dweeb, squarepants, nerd, they’re all not-nice terms that mean the same thing: someone excessively studious and socially inept.

65. “Annie” characters : ENS
There are a couple of letters N in the word “Annie”.

7. Strauss wrote a concerto in D for it : OBOE
Richard Strauss wrote his Oboe Concerto near the end of his life, in 1945. The idea for the concerto came from American oboist John de Lancie, who was with an Army unit that took control of the Bavarian town in which Strauss lived at the end of WWII.

11. One preparing an oil pan? : ART CRITIC
The idea here is that an art critic might “pan” (severely criticize) a particular oil painting.

12. ___ bread : PITA
Pita is a lovely bread in Middle-Eastern and Mediterranean cuisines. Pita bread is usually round, and has a “pocket” in the center. The pocket is created by steam that puffs up the dough during cooking leaving a void when the bread cools. The pockets were a big hit in the seventies when someone came up with the idea of using them for fillings hence creating pita sandwiches or “pita pockets”.

22. Act the coxcomb : PREEN
A coxcomb is a bit of fop or a dandy. The term comes from “cockscomb”, the comb or crest sported by a cockerel.

28. R. J. Reynolds brand : CAMEL
The advertising mascot for Camel cigarettes was officially known as “Old Joe”, but was popularly known as “Joe Camel”. Joe originated in the seventies, in an advertising campaign that ran only in Europe where sometimes he was depicted wearing a French Foreign Legion cap. He was imported to the US in 1988 on the occasion of the 75th anniversary of the Camel brand. The big controversy surrounding the use of the camel character was that a 1991 study found that 5-6 year old children could recognize Joe Camel more readily than either Mickey Mouse or Fred Flintstone. Also, soon after Old Joe was introduced in the US, the Camel brand’s share of the illegal market to underage smokers went up from 1% to just under 33%.

30. Fox ratings : TENS
A “fox” is a good-looking woman, someone who might be rated a “ten”. Not terms I would use, so don’t shoot the messenger …

31. Stiff bristles : AWNS
Awns are hair or bristle-like structures found in numerous species of plants. In some species, like barley, the awns can contain photosynthetic tissue.

32. ___ Matsuhisa, celebrity chef and restaurateur : NOBU
Nobu Matsuhisa is celebrity chef from Japan. Nobu was invited to open a Japanese restaurant in Lima, Peru in 1973, and while in South America developed his own Peruvian-Japanese fusion cuisine. He moved to the US a few years later, and now there “Nobu” and “Matsuhisa” restaurants all over the world.

33. Small cannon balls : GRAPESHOT
Grapeshot is a type of ammunition used for cannonfire. Grapeshot is made up of small metal balls or slugs wrapped in a canvas bag. When fired, the grapeshot spreads out like the pellets coming out of a shotgun.

37. Ottoman relative : DIVAN
Ottomans and divans are essentially couches without backs or arms.

38. Capital ENE of Fiji : APIA
Apia is the capital city, and in fact the only city, of the Pacific island-nation of Samoa. The harbor of Apia is famous for a very foolish incident in 1889 involving seven naval vessels from Germany, the US and Britain. A typhoon was approaching so the safest thing to do was to head for open water away from land, but no nation would move its ships for fear of losing face in front of the others. Six of the ships were lost in the typhoon as a result and 200 American and German sailors perished. The British cruiser HMS Calliope barely managed to escape from the harbor and rode out the storm safely.

39. Wine colorer : TANNIN
A substance that is astringent is a chemical compound that tends to shrink or constrict body tissues. Some red wines can have an astringent taste, a dry and puckering feeling, because of the presence of tannins. Tannins occur naturally in plants, probably as a defensive measure against predators who shy away from the astringent. The word “tannin” comes from an Old German word for oak or fir tree, as in “Tannenbaum”.

44. Second-simplest hydrocarbon : ETHANE
The main component in natural gas is methane, with the second most voluminous constituent being ethane. Both methane and ethane are combustible, and so traditionally the methane and ethane from natural gas were burned together to generate heat. However, since the sixties, ethane has been used as a valuable starter material for the production of ethylene, itself a raw material for polyethylene and other plastics. So, these days the ethane is extracted at a refinery before the natural gas is bottled as a fuel.

45. They may be found in preserves, informally : RHINOS
There are five types of rhinoceros that survive today, and the smaller Javan Rhino is the most rare. The rhinoceros is probably the rarest large mammal on the planet, thanks to poaching. Hunters mainly prize the horn of the rhino as it is used in powdered form in traditional Chinese medicine.

46. Part of the total : ADDEND
“Addend” is short for addendum, and is the name given to any set of numbers that is to be added.

53. Isle near Mull : IONA
Although the small island of Iona lies just off the west coast of Scotland, it was the site of a monastery built in the Middle Ages by a monk from Ireland names Colm Cille (also known as Columba). Colm Cille and his followers were sent into exile from the Irish mainland and settled in Iona, as at that time the island was part of an Irish kingdom. This monastery in Iona expanded its influence over the decades and founded other institutions all over Ireland and Great Britain. It is believed that the famous Book of Kells may have been written, or at least started, at the monastery on Iona. Iona is also the burial site for Macbeth, King of Scotland who was immortalized in Shakespeare’s fictional account of the king’s life.

The Isle of Mull (sometimes called just “Mull”) is part of the Inner Hebrides, which lie off the west coast of Scotland.