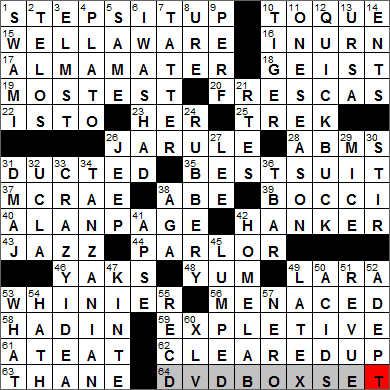 Today’s Wiki-est, Amazonian Googlies
Across
10. High-hatter’s wear? : TOQUE
A toque was a brimless style of hat that was very fashionable in Europe in the 13th to 16th centuries. Nowadays we associate toques with chefs, as it is the name given to a chef’s hat (called a “toque blanche” in French, a “white hat”). A chef’s toque is quite interesting. Many toques have exactly 100 pleats, often said to signify the number of ways that an egg can be cooked.

17. Sheepskin source : ALMA MATER
In ancient times, diplomas issued by educational institutions were made of thin sheepskin, as paper wasn’t an economically viable material back then.

The literal translation for the Latin term “alma mater” is “nourishing mother”. “Alma mater” was used in Ancient Rome to refer to mother goddesses, and in Medieval Christianity the term was used to refer to the Virgin Mary. Nowadays, one’s alma mater is the school one attended, either high school or college, usually one’s last place of education.

A poltergeist is a spirit or ghost that makes its presence known by making noises or by moving objects. The term “poltergeist” is German, coming from “poltern” meaning “to rumble” or “to make a noise”, and “Geist”, the German for “ghost” or “spirit”.

20. Sprites are similar to them : FRESCAS
Fresca is a Coca Cola product introduced in 1966, and is unusual in that it has no Pepsi Cola equivalent. It has always been marketed as a 0-calorie grapefruit drink, and so it’s artificially sweetened.

Irish singer Bono is a Dubliner, born Paul David Hewson. As a youth, Hewson was given the nickname “Bono Vox” by a friend, a Latin expression meaning “good voice”, and so the singer has been known as Bono since the late seventies. His band’s first name was “Feedback”, later changed to “The Hype”. The band members searched for yet another name and chose U2 from a list of six names suggested by a friend. They picked U2 because it was the name they disliked least …

26. Rapper with the 2002 #1 hit “Always on Time” : JA RULE
Ja Rule is the stage name of rapper Jeffrey Atkins. Apparently Ja Rule is noted not only for his music, but for his “feuds” with the likes of 50 Cent and Eminem.

There were two rounds of Strategic Arms Limitation Talks (SALT) between the US and the Soviet Union, and two resulting treaties (SALT I & SALT II). The opening round of SALT I talks were held in Helsinki as far back as 1970.

39. Italian game akin to pétanque : BOCCI
The Italian bowling game of “bocce” (anglicized as “bocci”) is based on a game played in Ancient Rome. “Bocce” is the plural of the Italian word “boccia” meaning “bowl”.

“Pétanque” is a form of the game of boules that is played in France, mainly in Provence.

40. Football Hall-of-Famer who became a Minnesota Supreme Court justice : ALAN PAGE
Alan Page is a former NFL footballer who played for the Minnesota Vikings and the Chicago Bears. While still playing professional football, Page went to the University of Minnesota Law School and earned his Juris Doctor degree in 1978. Outside of the football season, Page then worked at a law firm. In 1992, he was elected to the Minnesota Supreme Court, becoming the first African American to serve on the court.

49. Yuri’s beloved, in literature : LARA
“Doctor Zhivago” is of course the epic novel by Boris Pasternak, first published in 1957. I haven’t tried to read it but the 1965 film version is a must-see, directed by David Lean and starring Omar Sharif in the title role. The story centers on Yuri Zhivago, a doctor and poet, and how he is affected by the Russian Revolution and the Russian Civil War.

Olga Ivinskaya was the mistress of the writer Boris Pasternak. As such, Ivanskaya was the inspiration for the famous Lara character in Pasternak’s epic novel “Doctor Zhivago”.

63. Shakespeare’s Ross, e.g. : THANE
Thanes were Scottish aristocrats. The most famous thanes have to be the Shakespearean characters Macbeth (the Thane of Glamis, later Thane of Cawdor) and MacDuff (the Thane of Fife). Other thanes in “Macbeth” are Ross, Lennox and Angus, as well as Menteith and Caithness.

Down
1. Studier of sutras : SWAMI
A swami is a religious teacher in the Hindu tradition.

2. Final aim, to a philosopher : TELOS
“Telos” is the Greek word for “purpose, goal”. In the world of philosophy, a telos is an end or a purpose, and is a concept that is central to the philosophical method known as teleology.

3. Title site of six films: Abbr. : ELM ST
“A Nightmare on Elm Street” is a Wes Craven slasher-horror film, released in 1984. As I don’t do “slasher” nor “horror” I only learned recently that Johnny Depp was in the movie, making his feature film debut.

4. He wrote “No human thing is of serious importance” : PLATO
Plato was a Greek philosopher and mathematician. He was a student of the equally famous and respected Socrates, and Plato in turn was the teacher and mentor of the celebrated Aristotle.

6. Gull’s cry : I WAS HAD
A gull is someone easily cheated, someone gullible.

8. Strict follower? : -URE
A stricture is limit or a restriction.

9. Stamp feature, in philately lingo : PERF
In the world of stamp collecting, perforations are the small holes punched between individual stamps in a page, so that they can be separated.

13. Supervillain from Krypton : URSA
Ursa is one the three main antagonists who take on Superman in the movie “Superman II”.

“Superman II” is one of those movies that is surrounded in controversy due to problems encountered during production. “Superman II” was shot at the same time is the original “Superman” movie, with Richard Donner in the director’s chair. Donner didn’t like the instructions he was getting from the producers regarding the tone of the movie, and the resulting dispute led to him being fired, with about 25% of “Superman II” left to be shot. After Donner was replaced with Richard Lester, Gene Hackman refused to return for reshoots, so a lot of Hackman’s scenes ended up on the cutting room floor.

26. Major mode of transportation? : JEEP
The Jeep is the original off-road vehicle. It was developed by the American Bantam Car Company in 1940 at the request of the US government who recognized the upcoming need for the armed forces as American involvement in WWII loomed. The Bantam Company was too small to cope with demand, so the government gave the designs to competing car companies. The design and brand eventually ended up with AMC in the seventies and eighties.

29. Many sit on pads : MICE
A computer mouse often sits on a mousepad.

31. Baroque “key of glory”: Abbr. : D MAJ
The key of D major was regarded as “the key of glory” during the Baroque period. As a result, many trumpet concertos and sonatas were written in D major, as was the “Hallelujah” chorus from Handel’s “Messiah”.

32. Carol Burnett’s 17-Across : UCLA
The comedienne and actress Carol Burnett is perhaps best known for “The Carol Burnett Show” which ran on television for over ten years from 1967 to 1978. My favorite of Burnett’s performances is in the 1981 film “The Four Seasons”.

34. Like Jane Goodall’s study site : TANZANIAN
When the countries of Zanzibar and Tanganyika merged in 1964, the resulting state was named the United Republic of Tanzania, with “Tanzania” being a portmanteau of “Zanzibar” and “Tanganyika”.

Jane Goodall is a British anthropologist, famous for studying wild chimpanzees in Africa for 45 years. Working at Gombe Stream National Park in Tanzania, Goodall made many discoveries. She was the first to see chimps constructing and using tools, an activity thought to be limited to the human species. She also found out that chimpanzees are vegetarians.

36. Means of reaching a peak level? : T-BAR
A T-bar is a type of ski lift in which the skiers are pulled up the hill in pairs, with each pair standing (not sitting!) either side of T-shaped metal bar. The bar is placed behind the thighs, pulling along the skiers as they remain standing on their skis (hopefully!). There’s also a J-bar, a similar device, but with each J-shaped bar used by one skier at a time.

38. “Lord,” in Turkish : AGA
“Aga” (also “agha”) is a title that was used by both civil and military officials in the Ottoman Empire.

41. View from a pew : APSE
The apse of a church or cathedral is a semicircular recess in an outer wall, usually with a half-dome as a roof and often where there resides an altar. Originally apses were used as burial places for the clergy and also for storage of important relics.

Alex Haley’s 1976 novel “Roots” is based on Haley’s own family history. Haley claimed that he was a direct descendant of the real life Kunta Kinte, the slave who was kidnapped in the Gambia in 1767. If you remember the fabulous television adaptation of “Roots”, you might recall that Kunta Kinte was played by LeVar Burton, who later went on to play another famous role, Geordi La Forge on “Star Trek: the Next Generation”.

Noel Coward was the most flamboyant of personalities, a playwright, composer and actor. Coward worked in a remarkable range of genres. He wrote the wonderfully airy play “Blithe Spirit”, as well as the Oscar-winning WWII naval drama “In Which We Serve”. A couple of his more famous songs, many of which he performed himself in cabaret, were “Mad Dogs and Englishmen” and “London Pride”.

53. With 54-Down, start of a historic telegraph message : WHAT
54. See 53-Down : HATH
The first telegraph message in the US was sent by Samuel Morse from the US Capitol in 1844. The message was received by a B&O railroad depot in Baltimore, Maryland. The message content was the words “WHAT HATH GOD WROUGHT”, which is a quotation from the Book of Numbers in the Bible.

57. Tutee of Seneca : NERO
Seneca the Younger was a playwright as well as a tutor and advisor to the Emperor Nero of Ancient Rome. Although maybe innocent, Seneca was forced to commit suicide by Nero as it was alleged that Seneca participated in a plot to kill the emperor. To kill himself, Seneca cut into a number of veins in order to bleed to death.

60. Year in Claudius’s reign : XLV
I find Claudius to be the most fascinating of all the Roman Emperors. Claudius had a lot going against him as he walked with a limp and was slightly deaf. He was put in office by the Praetorian Guard (the emperor’s bodyguards) after Caligula was assassinated. Claudius had very little experience and yet proved to be very forward-thinking and capable.