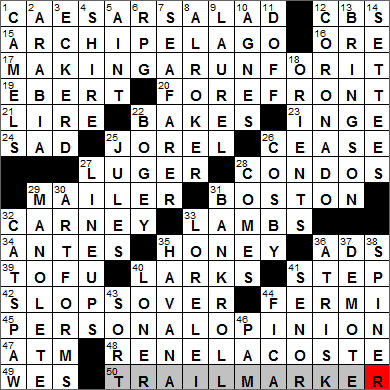 Today’s Wiki-est, Amazonian Googlies
Across
1. Entree meant to be eaten with the fingers, according to its creator : CAESAR SALAD
The Caesar Salad was created by restaurateur Caesar Cardini at the Hotel Caesar’s in Tijuana, Mexico. The original recipe called for whole lettuce leaves that were to be lifted up by the stem and eaten with the fingers.

19. Late critic featured on the Hollywood Walk of Fame : EBERT
Roger Ebert co-hosted a succession of film review television programs for over 23 years, most famously with Gene Siskel until Siskel passed away in 1999. Ebert was diagnosed and treated for thyroid cancer in 2002, and finally succumbed to a recurrence of the disease earlier this month.

23. So-called “Playwright of the Midwest” : INGE
Playwright William Inge had a run of success on Broadway in the early fifties. Inge’s most celebrated work of that time was the play “Picnic”, for which he was awarded a Pulitzer Prize. The original 1953 cast of “Picnic” included a young male actor making his debut on Broadway. His name was Paul Newman. Many of Inge’s works are set in the American heartland and so he became known as the “Playwright of the Midwest”.

25. Marlon Brando’s role in “Superman” : JOR-EL
Jor-El was a scientist on the planet Krypton who was married to Lara. Jor-El and Lara had an infant son named Kal-El who they were able to launch into space towards Earth just before Krypton was destroyed. Kal-El became Superman. In the 1978 movie “Superman”, Jor-El was played by Marlon Brando, Lara was played by Susannah York, and Kal-El/Superman was of course played by Christopher Reeve.

27. W.W. II pistol : LUGER
The correct name for the pistol known as the Luger is the Pistole Parabellum 1908. The Luger’s design was patented by Georg J. Luger in 1898, and became most famous for its use by the Germans during WWII. It was produced from 1900 to 1945, although 200 Lugers were produced recently and sold for over $17,000 each.

28. Buildings with many owners : CONDOS
The words “condominium” and “apartment” tend to describe the one type of residential property, a private living space with facilities shared with others residing in the same building or complex. The difference is that a condominium is usually owned, and an apartment is rented. At least that’s how it is in the US. The word “condominium” comes from the Latin “com” (together) and “dominum” (right of ownership).

32. Art of television : CARNEY
Art Carney was best known as the actor who played Ed Norton on the fifties television show “The Honeymooners”.

36. What Mad magazine lacked from 1957 to 2001 : ADS
“Mad” dropped advertising in 1957 in order to give the magazine more freedom to satirize our materialistic culture and ti bolster editorial freedom. However, “Mad” relented after 44 years and started to accept ads again in issue no. 402 in February 2001.

39. Part of many a vegan’s diet : TOFU
Tofu is another name for bean curd, and is a Japanese word meaning just that … bean that has “curdled”. Tofu is produced by coagulating soy milk, using either salt or something acidic. Once the protein has coagulated, the curds are pressed into the familiar blocks. Personally I love tofu, but my wife, she hates it …

44. Element #100 is named for him : FERMI
Enrico Fermi was born in Rome, Italy. Fermi moved to the US just before WWII, largely to escape the anti-Semitic feelings that were developing in Italy under Mussolini. It was Fermi’s work at the University of Chicago that led to the construction of the world’s first nuclear reactor. Fermi died at 53 years of age from stomach cancer . Cancer was a prevalent cause of death among the team working on that first nuclear pile. The synthetic element Fermium was discovered in 1952 and is named in his honor.

48. Athlete who started a clothing company in 1933 : RENE LACOSTE
René Lacoste was a French tennis player known for being very tenacious on court. This tenacity earned him the nickname “the Crocodile”. When he went into the clothing business, specializing in tennis apparel, his Lacoste brand became famous for its green crocodile logo.

Down
3. St. Petersburg’s ___ College : ECKERD
Eckerd College is a private liberal arts college located in St. Petersburg, Florida. The school was founded in 1958 as Florida Presbyterian College. It was renamed in 1971 after a large donation from Jack Eckerd, the businessman who founded the Eckerd chain of drugstores.

4. Middle-earth region, with “the” : SHIRE
The Shire is a region in Middle-earth appearing in J. R. R. Tolkien’s “The Lord of the Rings” series of novels.

6. Shoulder-fired weapon, for short : RPG
A rocket-propelled grenade (RPG) is an anti-tank weapon that is fired from the shoulder.

8. Willard Scott’s successor on “Today” : AL ROKER
Al Roker is best known as the meteorologist on the “Today” show on NBC. He has successfully branched out from that platform though, and even co-wrote a novel called “The Morning Show Murders”, about a celebrity chef and TV host who get entangled in mystery. Topical stuff …

9. Symbol of Apollo : LAUREL
Apollo is an important god both the Ancient Greek and Ancient Roman cultures. One of the symbols associated with Apollo is the laurel wreath.

10. Dancer de Mille : AGNES
Agnes de Mille was a dancer and choreographer from New York City. She was the niece of famous director Cecil B. DeMille, and the daughter of William C. deMille who was also a Hollywood director. Agnes turned to dance after she was told that she was “not pretty enough” to pursue her first love, which was acting …

11. Remove : DOFF
One doffs one’s hat, usually as a mark of respect. To doff is to take off, with “doff” being a contraction of “do off”.

14. Victorian-era furnishings : SETTEES
“Settee” is another word for a couch. The term come from the Old English “setl”, which was a long bench with a high back and arms.

22. Scorecard blemish : BOGEY
The term “Bogey” originated at the Great Yarmouth Golf Club in England in 1890, and was used to indicate a total round that was one over par (and not one over par on a particular hole, as it is today). The name Bogey came from a music hall song of the time “Here Comes the Bogey Man”. In the following years it became popular for players trying to stay at par to be “playing against Colonel Bogey”. Then, during WWI, the marching tune “Colonel Bogey” was written and named after the golfing term. If you don’t recognize the name of the tune, it’s the one that’s whistled by the soldiers marching in the great movie “The Bridge on the River Kwai”.

25. Pulitzer-winning cartoonist Feiffer : JULES
Jules Feiffer is a cartoonist whose most famous strip was “Feiffer”, which ran in the “The Village Voice”.

26. Bill who received a Presidential Medal of Freedom in 2002 : COSBY
The great comedic entertainer Bill Cosby is from Philadelphia. After working as a standup comedian, Cosby got his big break on television when he landed a starring role in “I Spy” alongside Robert Culp in the sixties. His greatest success on television came in the eighties and early nineties with his own sitcom “The Cosby Show”. At its height, “The Cosby Show” was the number one show in the US for five straight years.

29. Celebrated matador during Franco’s reign : MANOLETE
Manolete (real name Manuel Sanchez) was a famous bullfighter in Spain. A bull got his own back one day in 1947 when Manolete was just 30-years-old. After the bullfighter killed four bulls one day, the fifth managed to defend himself and fatally gored his tormentor.

Francisco Franco was the dictator of Spain from 1936 to 1975, a reign of 39 years that made him the longest ruling dictator in the history of Europe.

31. Be an angel? : BANKROLL
An angel investor is one who provides capital very early in a business’s life cycle. The term “angel” is borrowed from Broadway, where angels were wealthy people who provided funds to stage theatrical productions.

32. Tool : CAT’S PAW
The cat’s paw in my toolbox is one of my favorite tools. It is used to pull nails out of wood, although it makes quite a mess of the wood finish.

33. Title maiden in a Heinrich Heine poem : LORELEI
Lorelei is the name of a legendary mermaid who lured fishermen by singing a beautiful song so that they steered their boats onto rocks lurking beneath the water’s surface.

Heinrich Heine was a German romantic poet whose work often became noted through the derivative lieder composed by Robert Schumann in particular. Heine died in 1856, after spending the last eight years of his life bedridden. I like his last words … “God will forgive me. It’s his job.”

35. Home of the Karl Marx Theater : HAVANA
The Teatro Blanquita in Havana, Cuba was renamed after the Cuban Revolution and is now known as the Teatro Karl Marx. It has a huge auditorium that can seat 5,500 patrons.

41. Don Quixote, e.g. : SENOR
The full name of Cervantes’s novel is “The Ingenious Hidalgo Don Quixote of La Mancha”. In the story, Don Quixote is a retired country gentleman who heads out as a knight-errant and who renames himself Don Quixote of la Mancha. In his mind he designates a neighboring farm girl called Aldonza Lorenzo as his lady love, and renames her Dulcinea del Toboso.

46. Oil in a can : PAM
PAM cooking oil was introduced in 1961 by Leon Rubin and Arthur Meyerhoff. The name “PAM” is an acronym … standing for “Product of Arthur Meyerhoff” …