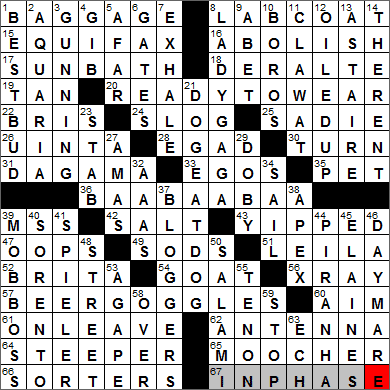 Today’s Wiki-est, Amazonian Googlies
Across
15. One of the Big Three in credit reports : EQUIFAX
There are three major consumer credit reporting agencies in the US:

18. Old West German moniker : DER ALTE
Konrad Adenauer was the first Chancellor of West Germany after WWII, taking office in 1949 at the age of 73. Adenauer was 87 years old when he left office. Understandably perhaps, his nickname was “Der Alte”, German for “the old man”. Adenauer spent much of WWII in prison, courtesy of Herr Hitler.

22. Jewish rite : BRIS
A mohel is a man who has been trained in the practice of Brit milah (circumcision). Brit milah is known as “bris” in Yiddish.

25. ___ Hawkins Day : SADIE
Sadie Hawkins was a character in Al Capp’s comic strip “Li’l Abner”. Sadie was still a spinster at the age of 35 so declared a “Sadie Hawkins Day” in which she chased the local men in a footrace, with marriage as the prize when one was caught.

28. Often-affected outburst : EGAD
“Egad” developed as a polite way of saying “oh God” in the late 1600s and is an expression of fear or surprise somewhat like “good grief!”.

31. Navigator who named Natal : DA GAMA
Vasco da Gama left on his first voyage of discovery in 1497. da Gama journeyed around the Cape of Good Hope, the southernmost tip of Africa, and across the Indian Ocean making landfall in India. Landing in India, his fleet became the first expedition to sail directly from Europe to the sub-continent. Vasco da Gama was well known for acts of cruelty, especially on local inhabitants. One of his milder atrocities was inflicted on a priest whom he labelled as a spy. He had the priest’s lips and ears cut off, and sent him on his way after having a pair of dog’s ears sewn onto his head.

Natal was a province of South Africa up to 1994. The name “Natal” means “Christmas” in Portuguese, a name given to the region by the explorer Vasco da Gama as he sailed by on Christmas Day in 1497.

36. “The Whiffenpoof Song” ending : BAA, BAA, BAA
The Yale Whiffenpoofs are an a cappella group based in Yale University. They are the oldest such university group in this country, established in 1909. “The Whiffenpoof Song” is the group’s traditional closing number. The song was first performed back in 1909, and has been recorded by many artists including Rudy Vallee and Bing Crosby.

39. Slush-pile pile: Abbr. : MSS
In the world of publishing, the slush pile is the collection of unsolicited manuscripts that have been submitted by hopeful authors.

42. ___ cellar : SALT
A salt cellar is small bowl that sits on a table holding salt for the seasoning of food. Salt cellars were popular before free-flowing salt became available in the early 1900s. They have been almost completed displaced now by salt shakers.

43. Imitated a wound-up toy : YIPPED
I guess the idea is that some wind-up toys can be little dogs that go “yip”.

47. Schlemiel’s cry : OOPS!
A “schlemiel“ is an awkward and clumsy person. “Shlemiel” is the Yiddish for “a bungler”, with the term coming from the German story “The Wonderful History of Peter Schlemihl”, published in 1813.

51. Title woman in a J. P. Donleavy novel : LEILA
J. P. Donleavy is an Irish American novelist and playwright from New York City who now lives in Ireland. Actually, Donleavy lives just outside the town of Mullingar, the town that was home to my ancestors.

54. Charge : GO AT
I read this answer as “GOAT” and could not make sense of it! A kind blog reader pointed out that the answer is actually “GO AT” meaning to “charge”.

56. Shot after a break? : X-RAY
X-rays were first studied comprehensively by the German physicist Wilhelm Röntgen (also “Roentgen”), and it was he who gave the name “X-rays” to this particular type of radiation. Paradoxically, in Röntgen’s native language of German, X-rays are routinely referred to as “Röntgen rays”. In 1901 Röntgen won the first Nobel Prize in Physics that was ever awarded, recognition for his work on X-rays.

57. Bar glasses? : BEER GOGGLES
“Beer goggles” is a slang term given to the supposed lowering of sexual inhibitions due to consumption of alcohol. The idea is that after a few drinks, potential partners seem more attractive.

Down
4. It was ceded to Brit. in the Treaty of Utrecht : GIB
Gibraltar is a small British territory on the Mediterranean coast just south of Spain. The British gained control of the area, which is just 2.6 square miles, during the War of the Spanish Succession in 1704. The ownership of Gibraltar is contested by the Spanish, but successive UK governments refuse to cede the territory as it is a major base for the Royal Navy. Gibraltar sits right at the entrance to the Mediterranean from the Atlantic.

8. Star of 2009’s Fame Ball Tour : LADY GAGA
Lady Gaga is the stage name of singer Stefani Germanotta from New York City. I’ve seen Lady Gaga interviewed on television a few times, and she sure is “unique”. Her music is of course out of my league, but she does know how to put on a show.

9. Assist with a job : ABET
The word “abet” comes into English from the Old French “abeter” meaning “to bait” or “to harass with dogs” (it literally means “to make bite”). This sense of encouraging something bad to happen morphed into our modern usage of “abet” meaning to aid or encourage someone in a crime.

13. Subject of the 2009 biography “Puttin’ on the Ritz” : ASTAIRE
As you may well know, Fred Astaire’s real name was Frederick Austerlitz. Fred was from Omaha, Nebraska and before he made it big in movies, he was one half of a celebrated music hall act with his sister Adele. The pair were particularly successful in the UK, and Adele ended up marrying into nobility in England, taking the name Lady Charles Cavendish.

As well as being the title to a 2009 biography of Fred Astaire, “Puttin’ on the Ritz” is a song written by Irving Berlin in 1929 for the musical film of the same name. Back in the twenties, the expression “puttin’ on the Ritz” was used to mean “dressing very fashionably”, well enough for a visit to the Ritz Hotel …

14. What “they say our love won’t pay,” in “I Got You Babe” : THE RENT
“I Got You Babe” is a duet that was released in 1965 by Sonny & Cher. The lyrics and music for the song were written by Sonny Bono himself.

34. Take the junk out? : SAIL
A junk is a sailing boat often seen in Chinese waters today, and as far back as 200 BC. The English word “junk” is just a phonetic spelling of a Chinese word for “ship”, although it would more correctly be pronounced “joong”.

37. Post masters? : BLOGGERS
“Blog” is a melding of the words “Web” and “log”. My two blogs are “logs” of all the New York Times and Los Angeles Times crosswords published, and I post them on the “Web” at NYTCrossword.com and LAXCrossword.com.

41. One going over telemarketing lines : SPIELER
A spiel is a lengthy speech or argument designed to persuade, like a sales pitch. “Spiel” comes to us from German, either directly (“spiel” is the German for “play”) or via the Yiddish “shpil”.

44. Ruthless sort : PIRANHA
Piranhas are fish that are reputed to be able to strip an animal to its bones in seconds, but this is somewhat of a myth. Piranhas are not in fact strict carnivores, and usually are more of a nuisance to fishermen rather than a danger, as they tend to eat bait that has been set to catch other fish. Much of the reputation of the piranha is owed to the description written by President Theodore Roosevelt in his book “Through the Brazilian Wilderness”. President Roosevelt was somewhat hoodwinked though as local fishermen put on a special “show” for him. They dumped hordes of hungry piranhas into a dammed section of a river and then tossed in a sliced up cow. President Roosevelt was pretty impressed by the orchestrated feeding frenzy.

45. Eatery seen in a “Manhattan” scene : ELAINE’S
Elaine’s was a bar and restaurant on the Upper East Side of Manhattan that was a regular haunt for celebrity New Yorkers until it closed its doors in 2011. Elaine’s was famous for hosting an Oscar night where the elite and famous would watch the Academy Award ceremony each year. The restaurant gets a mention in the Billy Joel song “Big Shot”, and is also featured in the Woody Allen movie “Manhattan”.

46. Light fright? : DAYMARE
A “daymare” is a condition experienced while awake featuring a pressure on the chest that is normally associated with the sense of fear experienced during a nightmare.

50. Torpedo layer : SALAMI
Salame (note the “e” at the end) is an Italian sausage that is traditionally associated with the peasant classes. The meat in the sausage is preserved with salt, and it can be hung and stored for as long as ten years. The name “salame” comes from “sale”, the Italian word for salt, and “-ame”, a suffix indicating a collective noun. Our English word “salami” is actually the Italian plural for “salame”.

“Torpedo” is a slang term for a submarine sandwich.

55. Construction piece with a mate : TENON
One simple type of joint used in carpentry is a mortise and tenon, basically a projection carved at the end of one piece of wood that fits into a hole cut into the end of another. The mortise is the “hole” and the tenon is the “projection”.

63. Command level: Abbr. : ECH
We use the word echelon (ech.) to describe a rank, particularly in the military. The term comes from French, in which language it has the same meaning, although the original meaning in Old French is “rung of a ladder”.