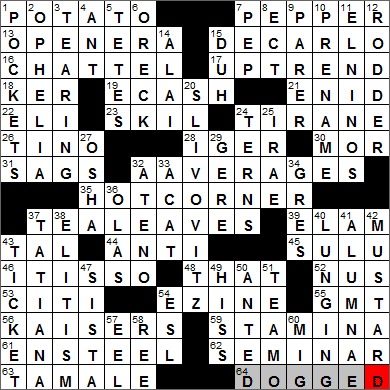 CROSSWORD SETTER: Jim Page
THEME: Hot Corners … to make sense of the eight answers in the corner of the grid, we have to place the word “HOT” in front:

Today’s Wiki-est, Amazonian Googlies
Across
13. Tennis world since 1968 : OPEN ERA
In the sport of tennis, the Grand Slam tournaments were opened up to professional players, and not just amateurs, in 1968. So, the period since 1968 has been called “The Open Era”.

15. Dan who drew “Archie” : DECARLO
Dan DeCarlo was a cartoonist who worked for many years for Archie Comics, and is recognized as the person who created the contemporary look for the “Archie” characters. DeCarlo also created the character Sabrina the Teenage Witch.

16. Movable property : CHATTEL
In the world of the law, a chattel is a piece of personal property that can be moved. In earlier times, “chattel” was used to describe a slave.

21. So-called “Wheat Capital of Oklahoma” : ENID
Enid, Oklahoma takes its name from the old railroad station around which the city developed. Back in 1889, that train stop was called Skeleton Station. An official who didn’t like the name changed it to Enid Station, using a character from Alfred Lord Tennyson’s “Idylls of the King”. Maybe if he hadn’t changed the name, the city of Enid would now be called Skeleton, Oklahoma! Enid has the nickname “Queen Wheat City” because is has a huge capacity for storing grain, the third largest grain storage capacity in the world.

22. One “coming” in a Three Dog Night hit : ELI
The rock band Three Dog Night had its first and biggest success back in 1969 with the Harry Nilsson song “One”. The song is perhaps best known for it’s opening words, “One is the loneliest number …” Three Dog Night took their name from an Australian expression. Apparently indigenous Australians would sleep in a hole in the ground alongside their tame dingoes On a cold night, they would huddle up to two dingoes and if it was really, really cold, it was a “three dog night”.

23. Big maker of power tools : SKIL
Skil Power Tools sold the first “Skilsaw” back in 1924, for $160. Despite almost a century of inflation, a Skilsaw can be purchased today for a fraction of that original price.

24. European capital that’s majority-Muslim : TIRANE
Tirane is the capital city of Albania and has been so since 1920. Tirane was seized by the Nazis in WWII but was liberated in 1944, at which point the Communists seized power. The Communists were ousted in the elections of 1992 leaving a void that led to much bloodshed and an eventual EU military mission to stabilize the capital and the rest of the country. Today things have become so calm that Albania is a member of NATO.

26. Ex-Yankee Martinez : TINO
Tino Martinez has retired from Major League Baseball. Martinez played first base for a number of teams including the Mariners, Yankees, Cardinals and Devil Rays. Martinez was born and raised in Tampa, Florida and as a boy he worked in his father’s cigar factory.

28. Eisner’s successor at Disney : IGER
Robert Iger is currently the president and CEO of the Walt Disney Company, and is the successor to Michael Eisner. Iger worked for ABC when it was taken over by Disney in 1996, and in 1999 he was named president of Walt Disney International. Iger is doing okay for himself. He earned more than $29 million in 2009.

30. Western Sahara neighbor: Abbr. : MOR
The country of Morocco is located in North Africa, but lies just 9 miles south of Spain. The two continents are separated by the Mediterranean Sea at the Straits of Gibraltar.

43. 1960 chess champ : TAL
Mikhail Tal was truly a chess legend. Tal holds the record for the longest unbeaten streak in competition chess. And the second longest winning streak, well, that was by Tal as well.

45. George Takei TV and film role : SULU
Mr. Hikaru Sulu was of course played by George Takei in the original “Star Trek” series. Takei has played lots of roles over the years and is still very active in television. Did you know that he appeared in the 1963 film about President Kennedy’s WWII career called “PT-109”? Not only did Takei play the helmsman on the Starship Enterprise, he played the helmsman steering the Japanese destroyer that ran down John F. Kennedy’s motor torpedo boat.

52. Fraternity letters : NUS
The Latin equivalent of the Greek letter nu is “N”. An uppercase nu looks just like the Latin capital N, however, the lowercase nu looks like our lowercase “v”. Very confusing …

53. ___ Field : CITI
Citi Field is the baseball stadium that is currently home to the New York Mets. Citi Field sits right next door to Shea stadium, where the Mets had played for decades. And the name of course comes from sponsor Citigroup.

54. Slate, for one : EZINE
“Slate” is an online magazine founded in 1996. “Slate” was originally owned by Microsoft and was part of the MSN online offering. The magazine has been available for free since 1999 (it is ad-supported) and has been owned by the Washington Post Company since 2004.

55. Frequent abbr. in BBC announcements : GMT
Greenwich Mean Time (GMT) is the time at the Prime Meridian, the meridian that runs through Greenwich in London.

56. Crusty rolls : KAISERS
The crusty roll known as a Kaiser roll was invented in Vienna, Austria. It is thought that the “Kaiser” name was applied in honor of Austrian Emperor Franz Joseph I.

59. Marathoner’s asset : STAMINA
The marathon is run over 26 miles and 385 yards, and of course commemorates the legendary messenger-run by Pheidippides from the site of the Battle of Marathon back to Athens. The actual distance run today was decided in 1921, and matches the length of the modern-day Marathon-Athens highway.

Hot Tamales are a cinnamon candy made by Just Born. They look like red versions of the other Just Born candy called Mike and Ike. That’s no coincidence, as Hot Tamales were developed as a way to make use of rejected Mike and Ike candy. The dark red color and intense cinnamon flavor was added to the Mike and Ike rejects, masking the original flavor and color.

Down
1. Snacks in the frozen food aisle : HOT POCKETS
Hot Pockets were introduced in the seventies by brothers David and Paul Merage. Hot Pockets are microwaveable turnovers filled with cheese, meat or vegetables.

6. Hoover rival : ORECK
The Oreck Corporation is named after founder David Oreck and is a manufacturer of vacuum cleaners and air purifiers. The company started out selling vacuum cleaners by mail, a new concept in 1963. David Oreck himself appears regularly as a spokesman in the company’s ads and infomercials.

11. Current events? : EL NINOS
When the surface temperature of the Pacific Ocean rises or falls more that half a degree centigrade, then there is said to be an El Niño episode. That small temperature change in the Pacific has been associated with climatic changes that can stretch right across the globe. El Niño is Spanish for “the boy” and is a reference to the Christ child. The phenomenon was given this particular Spanish name because the warming is usually noticed near South America and around Christmas-time.

20. Plum brandy : SLIVOVITZ
Slivovitz is plum brandy. The term “slivovitz” comes from the Slavic for “damson plum” and “brandy”, and the beverage is produced and consumed mainly in Slavic regions of central and eastern Europe.

24. Beach sights : TERNS
Terns are seabirds that are found all over the world. The Arctic Tern makes a very long-distance migration. One Arctic Tern that was tagged as a chick in Great Britain in the summer of 1982, was spotted in Melbourne, Australia just three months later. The bird had traveled over 14,000 miles in over those three months, an average of about 150 miles a day. Remarkable …

25. “Dies ___” : IRAE
“Dies Irae” is Latin for “Day of Wrath”. It is the name of a famous melody in Gregorian Chant, one that is often used as part of the Roman Catholic Requiem Mass.

27. Workplace watchdog, in brief : OSHA
The Occupational Safety and Health Administration (OSHA) was created in 1970 during the Nixon administration. OSHA regulates workplaces in the private sector and regulates just one government agency, namely the US Postal Service.

29. “The Hoax” star, 2006 : GERE
Richard Gere has played such great roles on the screen, and I find him to be a very interesting character off the screen. Gere has been studying Buddhism since 1978 and is a very visible supporter of the Dalai Lama and the people of Tibet. That said, I saw him interviewed on a British television show recently and he really came across quite badly, very full of himself.

34. Advanced deg. tests : GRES
Passing the Graduate Record Examination (GRE) is usually a requirement for entry into graduate school here in the US.

41. Barnard grads, e.g. : ALUMNAE
An “alumnus” (plural … alumni) is a graduate or former student of a school or college. The female form is “alumna” (plural … alumnae). The term comes into English from Latin, in which alumnus means foster-son or pupil.

42. Spicy pretzel dip : HOT MUSTARD
Pretzels originated in Europe and are especially popular in Southern Germany where a pretzel is known as “Brezel”. Pretzels were introduced into the US in the 1800s by immigrants from Germany and Switzerland who came to be known over here as the Pennsylvania Dutch.

47. Blues vocalist ___ Monica Parker : SISTA
Sista Monica Parker is a singer from Gary, Indiana who is known as “the lioness of the blues”.

54. Subj. for recent arrivals, maybe : ESL
English as a Second Language (ESL) is sometimes referred to as English for Speakers of Other Languages (ESOL) and English as a Foreign Language (EFL).

57. Electric ___ : EEL
Electrophorus electricus is the biological name for the electric eel. Despite its name, the electric “eel” isn’t an eel at all, but rather what is called a knifefish, a fish with an elongated body that is related to the catfish. The electric eel has three pairs of organs along its abdomen, each capable of generating an electric discharge. The shock can go as high as 500 volts with 1 ampere of current (that’s 500 watts), and that could perhaps kill a human.

Riddle-me riddle-me riddle-me-ree,
Perhaps you can tell what this riddle may be:
As deep as a house, as round as a cup,
And all the king’s horses can’t draw it up.
And the answer is … a well!