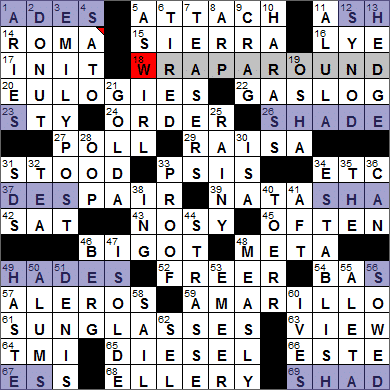 CROSSWORD SETTER: Jim Hilger
THEME: Wraparound Shades … five of the rows in today’s grid have the word SHADES “wrapped around” the grid, so the word starts on the right and finishes on the left:

18A. With 61-Across, some beachwear … which literally can be found five times in this puzzle : WRAPAROUND
61A. See 18-Across : SUNGLASSES

16. Oven cleaner component : LYE
Today when we purchase what is labelled as “lye”, it is caustic soda (sodium hydroxide).

20. Passing remarks? : EULOGIES
A eulogy is a speech or piece of writing that praises someone who has recently passed away or who is retiring. “Eulogy” comes from the Greek word “eulogia” meaning “praise”.

29. Mrs. Gorbachev : RAISA
Raisa Gorbachova was the wife of Soviet leader Mikhail Gorbachev. There’s no doubt that Raisa’s charm and personality helped her husband as he worked to change the image of the Soviet Union.

33. Greek consonants : PSIS
The Greek letter psi is the one that looks a bit like a trident or a pitchfork.

34. Alternative to an ellipsis, maybe : ETC
An ellipsis is a series of dots (usually three) used to indicate an omission in some text. The term comes from the Greek word “élleipsis”, which means “omission”.

39. “War and Peace” heroine : NATASHA
I have to confess that I have tried to read Leo Tolstoy’s “War and Peace” twice in my life, and failed both times (it is l-o-n-g). Even though the 1956 movie adaptation runs for 3 1/2 hours, it’s still the easy way out! The film version stars Audrey Hepburn as Natasha Rostova and Henry Fonda as Count Pierre Bezukhov.

46. Archie Bunker, e.g. : BIGOT
“All in the Family” is an American sitcom, a remake of the incredibly successful BBC show called “Till Death Us Do Part”. Both the UK and US versions of the sitcom were groundbreaking in that the storyline brought into focus topics previously considered unsuitable for a television comedy, including racism, homosexuality, women’s liberation, menopause and impotence. “All in the Family” is one of only three TV shows that has topped the Nielsen ratings for five consecutive seasons (the other two are “The Cosby Show” and “American Idol”).

Carroll O’Connor was the third choice to play Archie Bunker on the marvelous sitcom “All in the Family”. Before O’Connor accepted the role, Jackie Gleason and Mickey Rooney turned it down.

48. Self-referential, in modern lingo : META
In recent decades the prefix “meta-” has started to be used as a standalone adjective. In this sense “meta” means “self-referential”, describing something that refers to itself. For example, “This sentence starts with the word ‘this’ and ends with the word ‘this’” might be called a meta sentence. A movie that is about the making of the very same movie could also be described as meta.

49. James Woods’s voice role in “Hercules” : HADES
“Hercules” is a 1997 Disney animated film about the Greek hero of mythology. In Greek mythology, the hero’s name is “Heracles”, but we tend to use the Roman version “Hercules”.

The actor James Woods is at his best in “bad guy” roles I always think. He really knows how to play the manic characters. My favorite of his portrayals is in a relatively trivial movie called “The Specialist” with Sylvester Stallone and Sharon Stone.

52. Like South Korea vis-à-vis North Korea : FREER
The Korean War took place from 1950 to 1953 and was fought between the Republic of Korea (the South) and the Democratic People’s Republic of Korea (the North). The war came about because, at the end of WWII, Korea was divided by the allies along the 38th Parallel, with the Soviet Union controlling territory north of the line, and the US occupying the south. North Korean troops invaded the south in 1950, which started the armed conflict. An armistice was signed in 1953 which restored the border, but there are outbreaks of fighting to this very day, as we all well know.

59. City with the slogan “Step Into the Real Texas” : AMARILLO
Amarillo in the Texas panhandle is known as “The Yellow Rose of Texas” because Amarillo is the Spanish for “yellow”. The city was originally called Oneida.

The Amarillo Convention and Visitor Council has promoted a motto for the city since 1990: “Step Into the Real Texas”.

65. Pump option : DIESEL
There are two main types of internal combustion engine. Most cars in the US use spark injection engines (gasoline engines) in which a spark plug sparks in order to ignite the fuel-air mixture. A diesel engine, on the other hand, has no spark plug per se, and uses the heat generated by compressing the air-fuel mixture to cause ignition.

66. Villa d’___ : ESTE
The Villa d’Este is a beautiful villa close to Tivoli near Rome, Italy.

68. Queen of mystery : ELLERY
The Ellery Queen series of detective novels was somewhat unique in that Ellery Queen was the hero of the tales, and was also the pen name of the author. Actually, the “author” was a pair of writers; two cousins from Brooklyn, New York.

69. Sprat relative : SHAD
The shad is also known as the river herring. The eggs (roe) of the female shad are prized as a delicacy in the Eastern US.

Down
1. Neighbor of Perseus, in the night sky : ARIES
The constellation of Perseus is noted as the “source” of the meteor shower known as the Perseids.

3. Adviser on dos and don’ts : EMILY POST
Emily Post was a writer from Baltimore, Maryland who is best known for her writings on the subject of etiquette. Her work giving advice on etiquette is continued by the Emily Post Institute, which she founded in 1946.

4. 1974 Peace Nobelist : SATO
Prime Minister Eisaku Sato of Japan won the Nobel Peace Prize in 1974 (sharing it with Irishman Sean MacBride). He won for “his renunciation of the nuclear option for Japan and his efforts to further regional reconciliation”. Sato defined Japan’s nuclear policy in the sixties by laying out “Three Non-Nuclear Principles”. The principles are that Japan will not possess, nor manufacture nuclear weapons, not permit introduction of nuclear weapons into Japanese territory.

8. Dada pioneer : ARP
Hans Arp was a French artist renowned for his work with torn and pasted paper, although that wasn’t the only medium he used. Arp was the son of a French mother and German father and spoke both languages fluently. When he was speaking German he gave his name as Hans Arp, but when speaking French he called himself Jean Arp. Both “Hans” and “Jean” translate into English as “John”. In WWI Arp moved to Switzerland to avoid being called up to fight, taking advantage of Swiss neutrality. Eventually he was told to report to the German Consulate and fill out paperwork for the draft. In order to get out of fighting, Arp messed up the paperwork by writing the date in every blank space on the forms. Then he took off all of his clothes and walked with his papers over to the officials in charge. He was sent home …

11. Gene Vincent’s “Be-Bop-___” : A-LULA
“Be-Bop-A-Lula” is an early rock and roll song, recorded in 1956 by Gene Vincent and His Blue Caps. The unusual name is probably related to the song “Be-Baba-Leba” recorded just over ten years earlier, in 1945 by Helen Humes. Both these titles derive from a similar sounding phrase common in jazz circles in the forties, which gave the name to the “bebop” style of music. And the original jazz term “bebop” probably came from “Arriba! Arriba!”, words of encouragement from Latin American bandleaders to their musicians.

Gene Vincent was the stage name of fifties rock and roll and rockabilly singer Vincent Craddock. Vincent was the first inductee into the Rockabilly Hall of Fame when it was formed in 1997. His biggest hit was his own composition, “Be-Bop-A-Lula” that was released in 1956.

12. Council of clergy : SYNOD
The word synod comes from the Greek word for assembly, or meeting. A synod is a church council, usually in the Christian faith.

19. Dept. of Labor division : OSHA
The Occupational Safety and Health Administration (OSHA) was created in 1970 during the Nixon administration. OSHA regulates workplaces in the private sector and regulates just one government agency, namely the US Postal Service.

21. “A Woman Called ___” (Ingrid Bergman’s final film) : GOLDA
“A Woman Called Golda” is a 1982 movie made for television about the life of the Israeli Prime Minister Golda Meir. Ingrid Bergman played the title role, the last performance of her career. Bergman died four months after the film was released.

28. Alley ___ : OOP
French people, and circus acrobats in particular, use the phrase “allez hop!” as words of encouragement, sort of like our “let’s go!”. The phrase was anglicized to “alley oop”.

31. Radical ’60s org. : SDS
Students for a Democratic Society (SDS) was an activist group in the sixties. The SDS organized the largest student strike in the history of the United States on 26 April 1968, with about a million students staying away from class that day. The “Students for a Democratic Society” name was revived in 2006 with the foundation of a new US-based student organization with left wing beliefs. Today’s SDS was founded by a pair of high school students from Greenwich Village, New York.

32. Subject of a 1773 Act of Parliament : TEA
The famous destruction of tea in Boston Harbor to protest against the Tax Act took place on December 16, 1773. The action was referred to as the “destruction of the tea” for decades, and it wasn’t until 1834 that the term “Boston Tea Party” first appeared in print.

44. Thüringen thoroughfare : STRASSE
“Strasse” is the German word for “street”.

46. It may come off the shelf : BERG
An iceberg is a large piece of freshwater ice that is floating freely after having broken off from a glacier or ice shelf. Out use of “iceberg” comes from the Dutch word for the same phenomenon “ijsberg”, which translates literally as “ice mountain”.

47. Wagner opera heroine : ISOLDE
“Tristan und Isolde” is an epic opera by Richard Wagner (Wagner … not one of my favorites!). Many see it as the first serious move away from the traditional harmony and tonality of the classical and romantic eras.

50. Some reuners : ALUMS
An “alumnus” (plural … alumni) is a graduate or former student of a school or college. The female form is “alumna” (plural … alumnae). The term comes into English from Latin, in which alumnus means foster-son or pupil. “Alum” is an informal term used for either an alumna or an alumnus.

53. Arab sovereign: Var. : EMEER
In English, emir can also be written as emeer, amir and ameer (watch out for those spellings in crosswords!).

55. Prince Valiant’s love : ALETA
Aleta is the the wife of Prince Valiant in the long-running comic strip. Edward, Duke of Windsor, called the “Prince Valiant” comic strip the “greatest contribution to English Literature in the past one hundred years”. I’m not so sure …

60. Saint of a children’s rhyme : IVES
You might remember the nursery rhyme “As I was going to St. Ives” from the third “Die Hard” movie, “Die Hard With a Vengeance”, in which it is treated as a riddle. The rhyme goes like this:

Soissons is an ancient town in northern France located about 60 miles northeast of Paris.