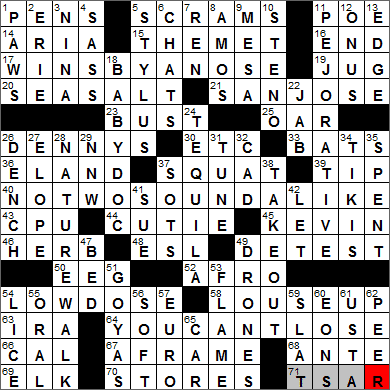 CROSSWORD SETTER: Lynn Lempel
THEME: Ose, Ose, Ose and Ose … each of the themed answers ends with an -OSE suffix, but in each case the suffix is pronounced differently:

40A. What’s odd about the ends of the answers to the four starred clues NO TWO SOUND ALIKE
17A. *Triumphs, but barely WINS BY A NOSE
21A. *First capital of California SAN JOSE
54A. *Nonfatal amount of radiation, say LOW DOSE
64A. *Huckster’s pitch YOU CAN’T LOSE

Today’s Wiki-est, Amazonian Googlies
Across
11. “The Purloined Letter” writer POE
“The Purloined Letter” is the third of Edgar Allen Poe’s short stories to feature Le Chevalier C. Auguste Dupin, Poe’s famous detective. The two earlier stories were the celebrated “The Murders in the Rue Morgue” and “The Mystery of Marie Roget”.

15. Manhattan cultural landmark THE MET
The Metropolitan Opera of New York City is the largest classical music organization in the country, presenting about 220 performances each and every year. Founded in 1880, the Met is renowned for using technology to expand its audiences. Performances have been broadcast live on radio since 1931, and on television since 1977. And since 2006 you can go see a live performance from New York in high definition on the big screen, at a movie theater near you …

21. *First capital of California SAN JOSE
San Jose is the third-largest city in California and is located at the heart of Silicon Valley. The city was founded by the Spanish in 1777 and named El Pueblo de San José de Guadalupe. Under Spanish and Mexican rule, the territory of Alta California had its capital in Monterey. When California was made a US state, San Jose was named as the first capital, in 1850. Subsequently, the state legislature met in Vallejo in 1852, Benicia in 1853, and finally settled in Sacramento.

25. Regatta implement OAR
The word “regatta” is Venetian dialect and was originally used to describe boat races among the gondoliers of Venice on the Grand Canal back in the mid-1600s.

26. Family chain with a Grand Slam breakfast DENNY’S
Denny’s was the first restaurant I ate at on my initial visit to the US over 30 years ago. I thought I was in heaven. I’ve changed my opinion a little since then! Denny’s is famous for being “always open” (almost), something that blew my mind as a visitor from Ireland back in 1980. Denny’s was founded in 1953 in Lakewood, California, and originally went by the name “Denny’s Donuts”.

33. Belfry occupants BATS
The expression “bats in the belfry” meaning “mad, crazy” conjures up images of bats flying around Gothic bell towers, but actually it’s a relatively recent addition to our vernacular. The term is American in origin, and dates back only to the early 1900s. The concept is that someone who is “crazy”, with wild ideas flying around his or her head, can be described as having bats (wild ideas) flying around the belfry (head). The terms “bats” and “batty” originated at the same time, and are clearly derivative.

43. Core component of a PC CPU
The Central Processing Unit (CPU) is the main component on the “motherboard” of a computer. The CPU is the part of the computer that carries out most of the functions required by a program. Nowadays you can get CPUs in everything from cars to telephones.

45. Bacon of “Mystic River” KEVIN
Kevin Bacon is an actor from Philadelphia who appeared first on the big screen in the 1978 comedy “National Lampoon’s Animal House”. That wasn’t to be the big break that Bacon needed though, which came with “Footloose” in 1984. A fun fact about him is that he is the subject of a popular trivia game called “Six Degrees of Kevin Bacon” in which players have to show that a particular actor can be related to Kevin Bacon in fewer than six links, with each link being a movie in which two actors appear together.

“Mystic River” is a 2003 drama film based on a novel of the same name by Dennis Lehane. The movie was directed by Clint Eastwood and stars Sean Penn, Tim Robbins and Kevin Bacon. The film has quite a dark storyline and deals with the difficult subject of pedophilia.

48. Subj. for some green card holders ESL
English as a Second Language (ESL) is sometimes referred to as English for Speakers of Other Languages (ESOL) and English as a Foreign Language (EFL).

50. Meas. of brain activity EEG
An electroencephalogram (EEG) is a record of electrical activity caused by the firing of neurons within the brain. The EEG might be used to diagnose epilepsy, or perhaps to determine if a patient is “brain dead”.

63. A Gershwin IRA
Ira Gershwin was the lyricist who worked with his brother George to create such American classics as the songs “I Got Rhythm” and “Someone to Watch Over Me”, as well as the opera “Porgy and Bess”. After George Gershwin died, Ira continued to create great music, working with the likes of Jerome Kern and Kurt Weill.

64. *Huckster’s pitch YOU CAN’T LOSE
A huckster is an aggressive peddler of goods. The term derives from the Middle Dutch “hokester”, a word for a peddler.

66. Silent ___ (White House nickname) CAL
President Calvin Coolidge, the only US President to have been born on July 4th, was known as a man of few words. It was while he was serving as Vice-President in the administration of Warren G. Harding, that Coolidge earned the nickname “Silent Cal”. There is a famous story told about Coolidge’s reticence that I would love to think is true, attributed to the poet Dorothy Parker. Sitting beside him at dinner, she remarked to him, “Mr. Coolidge, I’ve made a bet against a fellow who said it was impossible to get more than two words out of you.” His famous reply: “You lose …”

68. Part of a.m. ANTE
The 12-hour clock has been around a long time, and was even used in sundial format in Ancient Egypt. Our use of AM and PM dates back to Roman times, with AM standing for Ante Meridiem (before noon) and PM standing for Post Meridiem (after noon). However, the Romans originally used the AM concept a little differently, by counting backwards from noon. So, 2AM to the Romans would be two hours before noon, or 10AM as we would call it today.

71. Ivan the Terrible, for one TSAR
The Grand Prince of Moscow, Ivan IV, became known as Ivan the Terrible. The name “terrible” is a translation from Russian, and perhaps creates the wrong impression about the man. The Russian word is “Grozny”, which is more akin to “strict” and “powerful” rather than “cruel” or “abominable”.

Down
2. Lake ___, 1813 battle site ERIE
The Battle of Lake Erie was fought during the War of 1812 just off the Ohio coast. The outcome of the action was a defeat for the British and control of Lake Erie for the remainder of the war.

3. Ship of 1492 NINA
The ship we know as the Niña was actually the nickname of a ship actually called the Santa Clara. The nickname “Niña” probably came from the name of her owner, Juan Niña of Moguer.

6. Schmoozes CHATS
“To schmooze” is to chat intimately, a word that comes from the Yiddish “schmusen” meaning ‘to chat” .

8. Half of an old radio comedy duo AMOS
“Amos ‘n’ Andy” was originally a radio sitcom that was on the air from the twenties right up to the fifties. It was about Amos Jones and Andy Brown, two farm workers from outside Atlanta who head to Chicago to make good for themselves. They eventually start up the Fresh Air Taxi Company. The show was somewhat groundbreaking for the time, as it depicted African Americans for the first time in positions of influence as business owners. There was a TV adaptation that aired from 1951 to 1953 and ran in syndication right up to 1966. I have never seen/heard the show, but it sounds like it is a classic …

9. Small plateau MESA
“Mesa” is the Spanish for “table” and is of course is how we get the term “mesa” that describes a geographic feature. “What’s the difference between a butte and a mesa?” I hear you cry! Both are hills with flat tops, but a mesa has a top that is wider than it is tall. A butte is a much narrower formation, taller than it is wide.

10. Pro at shorthand STENO
Stenography is the process of writing in shorthand. The term comes from the Greek “steno” (narrow) and “graphe” (writing).

18. Nickname of Haiti’s Duvalier, ousted in 1986 BABY DOC
Jean-Claude Duvalier was President of Haiti from 1971 to 1986. Jean-Claude had the nickname “Baby Doc”, a moniker that inherited from his father François “Papa Doc” Duvalier. Baby doc was a brutal a ruler as his father, which led to his overthrow in 1986 in a popular uprising.

The dictatorial President of Haiti known as “Papa Doc” was in fact a medical doctor. Francois Duvalier graduated with a medical degree from the University of Haiti in 1934, and even spent a year studying public health at the University of Michigan. It was his grateful patients who used to call him Papa Doc. When he came to power as President, he was less caring, and ruled with an iron fist until he died in office in 1971.

24. Margarita need TEQUILA
No one seems to know for sure who first created the cocktail known as a Margarite. The most plausible and oft-quoted is that it was invented in 1941 in Ensenada, Mexico. The barman mixed the drink for an important visitor, the daughter of the German ambassador. The daughter’s name was Margarita Henkel, and she lent her name to the new drink. The basic recipe for a margarita is a mixture of tequila, orange-flavored liqueur (like Cointreau) and lime juice.

26. Dame Judi of film DENCH
Dame Judi Dench is an outstanding English actress, known for decades in her home country mainly as a stage and television actress. Dench’s film career took off in the nineties with a relatively trivial role as “M” in the James Bond series of films. Since then she has played leading roles in several excellent movies including “Shakespeare in Love”, “Mrs. Brown” and “Notes on a Scandal”.

32. Rogue CAD
Our word “cad”, meaning “a person lacking in finer feelings”, is a shortening of the word “cadet”. “Cad” was first used for a servant, and then students at British universities used “cad” as a term for a boy from the local town. “Cad” took on its current meaning in the 1830s.

34. Polynesian carvings TIKIS
A tiki is a large carving of wood or stone resembling a human form, found in Polynesian cultures. The carvings often mark out boundaries of sites sacred to the locals.

37. Teetotalers they’re not SOTS
Our word “sot” comes from the Old English “sott”, meaning a fool. The word “sot” started to be associated with alcohol and not just foolery in the late 1500s.

41. Mystery novelist Grafton SUE
Sue Grafton writes detective novels, and her “alphabet series” features the private investigator Kinsey Millhone. She started off with “A Is for Alibi” in 1982 and is working her way through the alphabet, most recently publishing “U Is for Undertow” in 2009. What a clever naming system!

51. “The Naked Maja” and other paintings GOYAS
Francisco Goya was a Spanish painter, often called the last of the Old Masters and the first of the moderns. Two of Goya’s most famous works are “The Nude Maja” and “The Clothed Maja”.

57. Continental coin EURO
The European Union (EU) today stands at a membership of 27 states. The Euro is the official currency of only 16 of the 27. The list of states in the EU that don’t use the Euro includes the UK, Denmark and Sweden.

61. Org. with a national center named for Billie Jean King USTA
The United States Tennis Association (USTA) facility at Flushing Meadow is known as the USTA Billie Jean King National Tennis Center. The center is host to the annual US Open Tennis Championships.