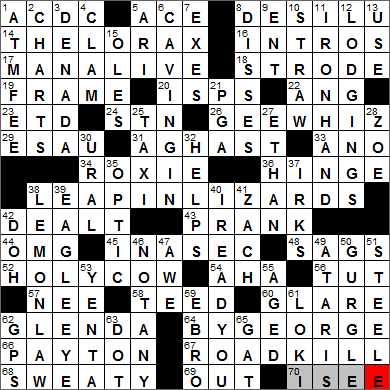 CROSSWORD SETTER: Samuel A. Donaldson & Doug Peterson
THEME: Literal Exclamations … all of today’s themed answers are exclamatory phrases, with clues that include literal definitions of those phrases:

Today’s Wiki-est, Amazonian Googlies
Across
1. “Back in Black” band : AC/DC
The Heavy Metal band known as AC/DC was formed by two brothers in Australia. The group is usually called “Acca Dacca” down under.

5. Biggest diamond? : ACE
The ace of diamonds is usually the “biggest” card in the suit.

14. Title Seuss character who speaks for trees : THE LORAX
“The Lorax” is a children’s book written by Dr. Seuss. It is an allegorical work questioning the problems created by industrialization, and in particular its impact on the environment.

20. AOL and Comcast : ISPS
An Internet Service Provider (ISP) is just what the name indicates, a company that provides its customers with access to the Internet. One way that ISPs differentiate themselves from each other is in the way in which end users are connected to the ISP’s network. So, there are cable ISPs, DSL ISPs, dial-up ISPs and satellite ISPs. I’d go with cable if I were you, if it’s available in your area …

22. “Hulk” director Lee : ANG
Taiwanese director Ang Lee sure has directed a mixed bag of films, mixed in terms of genre but not in terms of quality. He was at the helm for such classics as “Sense & Sensibility” (my personal favorite), “Crouching Tiger, Hidden Dragon”, “Hulk”, “Brokeback Mountain” and “Life of Pi”.

26. “Wow, you’re a regular expert at turning left!” : GEE WHIZ!
“Haw!” is a command given to a trained animal that is hauling something (like a horse or an ox). “Haw!” is used to instruct the animal to turn to the left. The equivalent command for a right turn is “Gee!” Just to confuse things, the same commands are used in the British Isles but with the opposite meanings. That must be pretty unsettling for jet-setting plow horses …

29. Jacob’s twin : ESAU
Esau, was the grandson of Abraham and the twin brother of Jacob, the founder of the Israelites. Esau is portrayed as being very different from his brother, as a hunter and someone who loves the outdoor life.

33. Yucatán year : ANO
The Yucatán is one of Mexico’s 31 states and is located in the east of the country, on the northern tip of the Yucatán peninsula.

34. Renée Zellweger’s role in “Chicago” : ROXIE
The wonderful 1975 musical “Chicago” is based on a 1926 play of the same name written by a news reporter called Maurine Dallas Watkins. Watkins had been assigned to cover the murder trials of Beulah Annan and Belva Gaertner for the “Chicago Tribune”, and used the story that unfolded as the basis for her play. Annan became the character Roxie Hart, and Gaertner became Velma Kelly. I’ve only ever seen the movie version of “Chicago” and never a live performance …

Renée Zellweger’s big break came in the 1996 movie “Jerry Maguire”. A few years later,  Zellweger followed that up with a string of successes in “Bridget Jones Diary” (2001), “Chicago” (2002) and “Cold Mountain” (2003). My wife and I love watching her play Bridget Jones, and as someone coming from the British Isles, I have to say that Zellweger does a remarkable job with the accent. She worked hard to perfect that accent, and of course she had a voice coach. She also went “undercover” and worked as a temp in an office for three weeks fine-tuning her skills.

43. April 1 gag : PRANK
April Fool’s Day is celebrated on April 1st in the western world. In the US (and Ireland) one can make practical jokes all day long if one wants. But in the UK there is a noon deadline. Anyone pranking after midday is called an “April Fool”.

44. Texter’s expression of surprise : OMG
OMG is text-speak for Oh My Gosh! Oh My Goodness! or any other G words you might think of …

57. Previously named : NEE
“Née” is the French word for “born” when referring to a female. The male equivalent is “né”.

62. Jackson with two Best Actress Oscars : GLENDA
Glenda Jackson is an outstanding retired actress from England. Jackson won two Oscars for performances in two wonderful films: “Women in Love” (1970) and “A Touch of Class” (1973). Jackson left her acting career behind in 1992 when she became a Member of Parliament, a job she has been doing ever since then. She was a junior minister for a while in Prime Minister Tony Blair’s government, and also ran an energetic but unsuccessful campaign to be elected Mayor of London.

64. “Wow, I’m standing next to Mr. Clooney himself!” : BY GEORGE!
The actor George Clooney’s breakthrough role was playing Dr. Doug Ross on TV’s “ER”, although before that he had a fairly regular role on the sitcom “Roseanne”. George’s aunt was the singer and actress Rosemary Clooney.

66. Bears legend Walter : PAYTON
Walter Payton was a running back who played for the Chicago Bears. Sadly, Payton passed away in 1999 at only 45 years of age.

Down
3. Response to “Gracias” : DE NADA
“Nada” is the Spanish word for “nothing”. “De nada” translates literally from the Spanish as “of nothing”, and is used to mean “you’re welcome” or “don’t mention it”. The French have the same expression “de rien”, also translating to “of nothing” and used the same way.

4. Happy as a ___ : CLAM
Our phrase “happy as a clam” dates back to the mid-1600s. Back then it was a more lengthy expression: “happy as a clam in the mud at high tide”. The idea was that a clam would be happy in its muddy home at high tide, because no one from land could get to it and eat it.

5. Jackie’s second husband : ARI
Aristotle Onassis was born to a successful Greek shipping entrepreneur in Smyrna in modern-day Turkey. However, his family lost its fortune during WWI and so Aristotle worked with his father to build up a new business empire centered on the importation of tobacco. In 1957, Aristotle founded the Greek national airline, what is today called Olympic Air, and he also got into the business of shipping oil around the world. He married Athina Livanos in 1946, the daughter of a wealthy shipping magnate. They had two children, including the famous Christina Onassis. Livanos divorced Onassis on discovering him in bed with the opera singer Maria Callas. Onassis ended his affair with Callas in order to marry Jackie Kennedy in 1968.

Jackie Kennedy Onassis was born into a privileged family, the daughter of Wall Street stock broker John Vernou Bouvier III. Ms. Bouvier moved in the same social circles as the Kennedy clan, and first met the then-US Representative John Kennedy at a dinner party hosted by mutual friends. Years later, after she saw her husband assassinated and then her brother-in-law (Bobby Kennedy) suffer the same fate, Jackie declared that she feared for the life of her children as they bore the Kennedy name. She left the country, eventually meeting and marrying Aristotle Onassis. Reportedly she was very satisfied that the Greek shipping magnate was able to provide privacy and security for her children.

8. Insults, informally : DISSES
“Dis” is a slang term meaning “insult” that originated in the eighties, and is a shortened form of “disrespect: or “dismiss”.

21. Ryder Cup org. : PGA
The Professional Golfers’ Association (PGA) was founded in 1916 and today has its headquarters (unsurprisingly) in Florida, where so many golfers live. Back in 1916, the PGA was based in New York City.

The Ryder Cup trophy was donated to the game of golf by Samuel Ryder, an English entrepreneur. Ryder made his money selling garden seeds in small packets. He only took up golf when he was in his fifties but became quite the enthusiast and eventually donated the trophy in 1927, when it was valued at 100 guineas.

27. Patriot Allen : ETHAN
Ethan Allen was one of the founders of the state of Vermont. Allen was also a hero in the American Revolutionary War, famous for leading (along with Benedict Arnold) the small band of men that captured Fort Ticonderoga. And yes, the Ethan Allan store and furniture line is named for Ethan Allen the patriot.

28. Actress Saldana of “Avatar” : ZOE
American actress Zoe Saldana played the Na’vi princess in “Avatar”, and Uhura in the 2009 movie “Star Trek”. Saldana seems to pick the right movies, as she is the only actress to have three different films in the top twenty at the box office for three consecutive weeks (“Avatar”, “The Losers” and “Death at a Funeral”).

30. Russia’s ___ Mountains : URAL
The eastern side of the Ural Mountains in Russia is generally regarded as the natural divide between the continents of Europe and Asia.

38. Car buyer’s protection : LEMON LAW
Long before we associated the term “lemon” with a defective car, it was used to describe defective items in general.

41. Comic actor Galifianakis : ZACH
Zach Galifianakis is a stand-up comedian who is making a name for himself on the big screen. Galifianakis garnered a lot of attention for his role in 2009’s “The Hangover”, and also starred opposite Robert Downey Jr. in the 2010 release “Due Date”.

49. Classic video game consoles : ATARIS
At one point, the electronics and video game manufacturer Atari was the fastest growing company in US history. However, Atari never really recovered from the video game industry crash of 1983.

51. “Remington ___” : STEELE
The eighties detective show “Remington Steele” stars Stephanie Zimbalist as a private detective, and Pierce Brosnan as the handsome bad boy, who’s really a good boy. The show is unusual in that it melds the detective genre with elements of romantic comedy.

59. Iberian Peninsula river : EBRO
The Ebro is the longest river in Spain. The river was known by the Romans as the Iber, and it is the “Iber” river that gives the “Iberian” Peninsula its name.

61. Thor’s archenemy in comics : LOKI
Loki is a god appearing in Norse mythology. In one story about Loki, he was punished by other gods for having caused the death of Baldr, the god of light and beauty. Loki was bound to a sharp rock using the entrails of one of his sons. A serpent drips venom which is collected in a bowl, and then Loki’s wife must empty the venom onto her husband when the bowl is full. The venom causes Loki great pain, and his writhing causes the earthquakes that we poor humans have to endure.

62. Satellite-based navigation aid, for short : GPS
GPS stands for Global Positioning System. The modern GPS system that we use today was built by the US military who received the massive funding needed because of fears during the Cold War of the use of Intercontinental Ballistic Missiles. We civilians all round the world owe a lot to President Ronald Reagan because he directed the military to make GPS technology available to the public for the common good. President Reagan was moved to do so after the Soviet Union shot down KAL flight 007 carrying 269 people, just because the plane strayed accidentally into Soviet airspace.

63. One of three in an ellipsis : DOT
An ellipsis is a series of dots (usually three) used to indicate an omission in some text. The term comes from the Greek word “élleipsis”, which means “omission”.

65. Gangster’s gun : GAT
“Gat” is a slang term for a gun that is derived from the Gatling gun, the precursor to the modern machine gun. The Gatling gun was invented by Dr. Richard J. Gatling in 1861. Apparently he was inspired to invent it so that one man could do as much damage as a hundred, thereby reducing the size of armies and diminishing the suffering caused by war. Go figure …