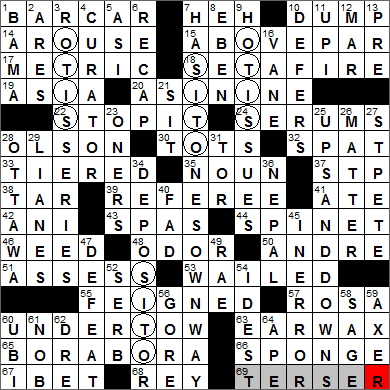 CROSSWORD SETTER: David J. Kahn
THEME: Lifting Up and Down … today’s themed answers honor the achievements of Elisha Otis, the inventor of the safety elevator. The name OTIS is shown in four sets of circled letters, going up (OTIS) and down (SITO):

25D. Vicissitudes of life, as for the inventor named in the circled squares? : UPS AND DOWNS

Today’s Wiki-est, Amazonian Googlies
Across
14. Pique : AROUSE
The words “whet” and “pique” can both be used in the sense of sharpening or awaking one’s interest or desire.

17. ___ system : METRIC
The metric system is the familiar name for the SI System, the International System of mMeasurements. The metric system is used in practically every country in the world, the notable exceptions being Burma, Liberia and … the United States.

30. Tater ___ : TOTS
Ore-Ida founders came up with the idea for Tater Tots when they were deciding what to do with residual cuts of potato. They chopped up the leftovers, added flour and seasoning, and extruded the mix through a large hole making a sausage that they cut into small cylinders. We eat 70 million pounds of this extruded potato every year!

38. Swabbie : TAR
“Swabbie” (also “swab, swabber”) is a slang term for a sailor, which we’ve been using since the late 1700s. A “swab” was originally a member of the crew assigned to the swabbing of the ship’s decks.

44. Small piano : SPINET
A spinet is the name given to a smaller version of keyboard instruments, such as the harpsichord, piano or organ. Spinets are still made today, as smaller and cheaper versions of full-size instruments.

50. Tennis’s Agassi : ANDRE
“Open” is the autobiography of tennis professional Andre Agassi, published in 2009. An amazing revelation in the book is that Agassi’s famous head of hair was actually a wig for much of his playing career. Can you imagine how hard it must have been to play tennis at his level with a rug stuck on?

57. Santa ___, Calif. : ROSA
Santa Rosa is the largest city in California’s Wine Country, and the county seat of Sonoma County. The epicenter of the so-called 1906 San Francisco Earthquake was located near Santa Rosa, so there was actually more damage in Santa Rosa, for the size of the city, than there was in San Francisco.

63. Swab target : EARWAX
“Cerumen” is the medical term for earwax. I’ve just been reading about some of the historical uses for earwax. However, I can’t bring myself to record them here, as each is more disgusting that the next …

Cotton swabs were originally marketed under the name “Baby Gays”, but this was changed in 1926 to “Q-Tips”, with the Q standing for “quality”.

65. Island near Tahiti : BORA BORA
Bora Bora is one of the Society Islands of French Polynesia. The name Bora Bora is imitative of the Tahitian name for the island and should really be pronounced “pora pora”. “Bora bora” translates as “first born”.

Down
1. Ole Miss rival : BAMA
The athletic teams of the University of Alabama (“Bama”) are nicknamed the Crimson Tide, a reference to the team colors: crimson and white.

2. Warlike deity : ARES
The Greek god Ares is often referred to as the Olympian god of warfare, but originally he was regarded as the god of blood-lust and slaughter. Ares united with Aphrodite to create several gods, including Phobos, Deimos and Eros.

11. Longtime news inits. : UPI
United Press International (UPI) was one of the biggest news agencies in the world, sending out news by wire to the major newspapers. UPI ran into trouble with the change in media formats at the end of the twentieth century and lost many of its clients as the afternoon newspapers shut down due to the advent of television news. UPI, which once employed thousands, still exists but with only a handful of employees.

25. Vicissitudes of life, as for the inventor named in the circled squares? : UPS AND DOWNS
Elevators (simple hoists) have been around for a long time. What Elisha Otis did was come up with the “safety elevator”, a design that he showcased at the 1853 World’s Fair in New York. At the Fair, Otis would stand on an elevated platform in front of onlookers and order his assistant to cut the single rope holding up the platform. His safety system kicked in when the platform had only fallen a few inches, amazing the crowd. After this demonstration, the orders came rolling in.

27. Sunshine State vacation spot : ST PETE
St. Petersburg, Florida is often referred to as St. Pete by locals and visitors alike. The neighboring city of St. Petersburg Beach also had its name shortened routinely, so in 1994 the residents voted to change the name officially to St. Pete Beach.

28. Pontiac’s tribe : OTTAWA
Chief Pontiac was a leader of the Ottawa people in the 1700s. He is most famously associated with the fight against the British (called Pontiac’s Rebellion) after they emerged victorious from the French and Indian War. The most noted action during the rebellion was the attack led by Pontiac on Fort Detroit, and the subsequent siege. Although the siege was unsuccessful, it served to unite the local Native American peoples in the fight.

29. Jungle vines : LIANES
Liana (also “liane”) is the name give to a vine that generally grows in moist areas such as rain forests. Lianas grow using the trees in the forest as structural support. My bet is that Tarzan swung from tree to tree on liana vines …

36. Land abutting Tibet : NEPAL
Nepal lies to the northeast of India. Today, the state is known as the Federal Democratic Republic of Nepal. In 2008, the Communist Party of Nepal won the country’s general election. Soon after, the Assembly voted to change the form of government, moving away from a monarchy and creating a secular republic.

49. Actress Charlotte : RAE
Charlotte Rae is an American actress, best known for playing the character Edna Garrett on two sitcoms from the seventies and eighties: “Diff’rent Strokes” and “The Facts of Life”. Towards the end of the series, the Edna Garrett character operated her own gourmet food shop called “Edna’s Edibles”.

52. Balkan resident : SERB
Serbs are an ethnic group native to the Balkans in southeastern Europe. Although Serbs exist as a minority group in many countries in the region, they are the majority ethnic group in Serbia, in Montenegro and in Bosnia and Herzegovina.

The Balkans (also “Balkan Peninsula”) is a region in southeastern Europe. The region takes its name from the Balkan mountain range that runs between Bulgaria and Serbia. The list of countries lying in the Balkans include Albania, Bosnia and Herzegovina, Bulgaria, Greece, Kosovo, Macedonia and Montenegro.

61. San Francisco hill name : NOB
Nob Hill is a very elevated and central location in the city of San Francisco. Because of its views of the surrounding city and environs, Nob Hill became a desirable place to live for the wealthy in the 1800s. The area is still one of San Francisco’s most affluent neighborhoods and is home to upscale hotels as well as the magnificent Grace Cathedral. The name “Nob Hill” comes from the slang term for someone who is well-to-do, a “nob”.

62. Rap’s Dr. ___ : DRE
Dr. Dre is the stage name of rapper Andre Romelle Young. Dr. Dre is known for his own singing career as well as for producing records and starting the careers of others such Snoop Dogg, Eminem and 50 Cent.