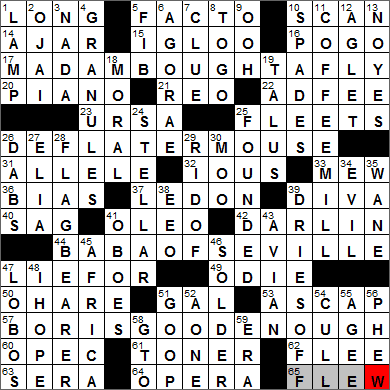 CROSSWORD SETTER: Joe DiPietro
THEME: Sounds Like Opera … each of todays themed answers sounds like the title of an opera:

17A. Lady paid for one insect? : MADAM BOUGHT A FLY (“Madame Butterfly”)
26A. Rodent that lets air out of balloons? : DEFLATER MOUSE (“Die Fledermaus”)
44A. Spanish rum cake? : BABA OF SEVILLE (“(The) Barber of Seville”)
57A. Headline after one of Becker’s Wimbledon wins? : BORIS GOOD ENOUGH (“Boris Godunov”)
64A. Each of this puzzle’s long Across answers sounds like one : OPERA

14. Not quite closed : AJAR
Our word “ajar” is thought to come from Scottish dialect, in which “a char” means “slightly open”.

16. ___ stick : POGO
What we know today as a pogo stick was invented in Germany by Max Pohlig and Ernst Gottschall. The name “pogo” comes from the first two letters in each of the inventors’ family names: Pohlig and Gottschall.

17. Lady paid for one insect? : MADAM BOUGHT A FLY (“Madame Butterfly”)
Puccini’s “Madama Butterfly” is the most-performed opera in the US. The opera that we see today is actually the second version that Puccini produced. The original version was first staged in 1904 at La Scala in Milan where it received a very poor reception. Puccini reworked the piece, breaking the second act into two new acts and making some other significant changes. The opera was relaunched a few months later and it was a resounding success.

20. One of the Baldwins? : PIANO
The Baldwin Piano Company was founded in 1857 by Dwight Hamilton Baldwin from Cincinnati, Ohio. The Baldwin company became the largest manufacturer of keyboard instruments in the US. Sadly, Baldwin pianos haven’t been manufactured in this country since 2008, and the Baldwin brand is now owned by Gibson Guitars.

21. Old touring car : REO
The REO Motor Company was founded by Ransom E. Olds (hence the name REO). The company made cars, trucks and buses, and was in business from 1905 to 1975 in Lansing, Michigan.

23. ___ Minor : URSA
Ursa Minor sits right beside the constellation Draco (Latin for “dragon”). Ursa Minor used to be considered the wing of Draco, and so was once called “Dragon’s Wing”.

26. Rodent that lets air out of balloons? : DEFLATER MOUSE (“Die Fledermaus”)
“Die Fledermaus” is a really lovely operetta composed by Johann Strauss II, first performed in 1874. “Fledermaus” is German for “bat” (literally “flying mouse”). The title comes from the fact that one of the characters (Falke) was abandoned drunk, dressed as a bat, in the center of town one evening. As Falke was subject to ridicule, the machinations of the story are designed as revenge for his humiliation.

31. Gene arising through mutation : ALLELE
A gene is a section of a chromosome that is responsible for a particular characteristic in an organism. For example, one gene may determine eye color and another balding pattern. We have two copies of each gene, one from each of our parents, with each copy known as an allele.

39. Demanding sort : DIVA
“Diva” comes to us from Latin via Italian. “Diva” is the feminine form of “divus” meaning “divine one”. The word is used in Italy to mean “goddess” or “fine lady”, and especially is applied to the prima donna in an opera. We often use the term to describe a singer with a big ego.

41. Land O’Lakes product : OLEO
Land O’Lakes was introduced by a co-op of creameries in 1921, in Saint Paul, Minnesota. The brand name of course comes from the nickname of the state of Minnesota: Land of 10,000 Lakes.

44. Spanish rum cake? : BABA OF SEVILLE (“(The) Barber of Seville”)
Rum baba (also “baba au rhum” in French) is a small yeast cake saturated in rum, and sometimes filled with whipped cream. Rum baba is derived from the recipe for the tall “babka” yeast cake that was introduced to the world by the Polish communities. The Polish words “baba” and “babka” mean “old woman” or “grandmother” in English. I guess someone must have thought that all grandmothers were saturated in rum!

Rossini’s opera “The Barber of Seville” was first performed in 1816 in Rome. It was one of the first Italian operas to be performed in this country, premiering at the Park Theater in New York City in 1825.

49. Comics beagle : ODIE
Odie is the best friend of “Garfield” and is a slobbery beagle, a character in Jim Davis’s comic strip.

50. Site of some Chicago touchdowns : O’HARE
O’Hare International is the fourth busiest airport in the world. The original airport was constructed on the site between 1942 and 1943, and was used by the Douglas Aircraft Company for the manufacture of planes during WWII. Before the factory and airport were built, there was a community in the area called Orchard Place, so the airport was called Orchard Place Airport/Douglas Field. This name is the derivation of the airport’s current location identifier: ORD (OR-chard D-ouglas). Orchard Place Airport was renamed to O’Hare International in 1949 in honor of Lieutenant Commander Edward O’Hare who grew up in Chicago. O’Hare was the US Navy’s first flying ace and a Medal of Honor recipient in WWII. As an aside, Edward O’Hare’s father was a lawyer for Al Capone who helped get the famous gangster convicted on tax evasion.

57. Headline after one of Becker’s Wimbledon wins? : BORIS GOOD ENOUGH (“Boris Godunov”)
Boris Becker is a former professional tennis player from Germany. Becker was a World No. 1, and in 1985 won Wimbledon at only 17 years of age. He still holds the record as the youngest ever Wimbledon champion.

60. Grp. created at the Baghdad Conference, 1960 : OPEC
The Organization of the Petroleum Exporting Countries (OPEC) was founded in 1960 at a conference held in Baghdad, Iraq that was attended by Iraq, Kuwait, Iran, Saudi Arabia and Venezuela. Nine more countries joined the alliance soon after, and OPEC set up headquarters in Geneva, Switzerland and then Vienna, Austria in 1965. The basic aim of OPEC was to wrench control of oil prices from the oil companies and to put it in the hands of the sovereign states that own the natural resource.

61. Copier need : TONER
The key features of a laser printer (or copier) are that it uses plain paper and produces quality text at high speed. Laser printers work by projecting a laser image of the printed page onto a rotating drum that is coated with photoconductors (material that becomes conductive when exposed to light). The areas of the drum exposed to the laser carry a different charge than the unexposed areas. Dry ink (called toner) sticks to the unexposed areas due to electrostatic charge. The toner is then transferred to paper by contact and is fused into the paper by the application of heat. So, that explains why paper coming out of a laser printer is warm, and sometimes powdery …

64. Each of this puzzle’s long Across answers sounds like one : OPERA
The Latin for “work” is “opus”, with the plural being “opera”.

Down
2. City east of Santa Barbara : OJAI
The city of Ojai, California is located just northwest of Los Angeles. One of the city’s claims to fame is that according to the TV shows “The Bionic Woman” and “The Six Million Dollar Man”, Jaime Sommers and Steve Austin grew up in Ojai and were childhood sweethearts!

5. Taradiddle : FIB
A tarradiddle (also taradiddle) is just a little lie, a fib.

6. Ancient markets : AGORAE
In early Greece the “agora” was a place of assembly. Often the assemblies held there were quite formal, perhaps for the reading of a proclamation. Later in Greek history, things became less formal as the agora evolved into a market place. Our contemporary word “agoraphobia” comes from these agorae, in the sense that an agoraphobe has a fear of open spaces, a fear of “public meeting places”.

7. Miss Scarlet’s game : CLUE
Clue is another board game that we knew under a different name growing up in Ireland. Outside of North America, Clue is marketed as “Cluedo”. Cluedo was the original name of the game, introduced in 1949 by the famous British board game manufacturer Waddingtons. There are cute differences between the US and UK versions. For example, the man who is murdered is called Dr. Black (Mr. Boddy in the US), one of the suspects is the Reverend Green (Mr. Green in the US), and the suspect weapons include a dagger (a knife in the US), a lead pipe (lead piping in the US) and a spanner (a wrench in the US). I think it’s a fabulous game, a must during the holidays …

10. Popular card game : SPADES
The American card game of Spades is one of the Whist family of games, a family which includes Bridge and Hearts. Spades is far less complex than Bridge but is similar in that there is a round of bidding before start of play. The game is usually played with partners, and the idea is to win at least the number of tricks that have been bid. One major difference with Bridge is that the trump suit is always spades, hence the name of the game. Apparently Spades was born as a game in Cincinnati, Ohio in the late 1930s, and then spread via the military in the 1940s.

12. Shoelace tip : AGLET
An aglet is the plastic or metal sheath that is found on the end of a shoelace or perhaps a drawstring. The name “aglet” comes from the Old French word “aguillette” meaning “needle”.

19. Anklebone : TALUS
The collection of seven bones in the foot just below the foot are known collectively as the tarsus. One of those bones is the talus, more commonly called the ankle bone. The talus is the lower part of the ankle joint and articulates with the lower ends of the tibia and fibula in the lower leg.

25. Like St. Augustine, in 1565 : FOUNDED
The city of St. Augustine in northeast Florida was founded as San Agustín in 1565 by the Spanish. That makes St. Augustine the oldest continuously occupied, European-established settlement in the whole of the US. The Spanish maritime expedition first sighted land in the area on August 28, 1565. As August 28 was the feast day of Augustine of Hippo, San Agustín was chosen as the name for the new territory.

27. Kazan of Hollywood : ELIA
Elia Kazan won Oscars for best director in 1948 for “Gentleman’s Agreement” and in 1955 for “On The Waterfront”. In 1999 Kazan was given an Academy Lifetime Achievement Award. He also directed “East of Eden”, which introduced James Dean to movie audiences, and “Splendor in the Grass” that included Warren Beatty in his debut role.

38. Job listing inits. : EEO
Equal Employment Opportunity (EEO) is a term that has been around since 1964 when the Equal Employment Commission was set up by the Civil Rights Act.

41. Heckelphone cousins : OBOES
A heckelphone is a musical instrument like an oboe, but pitched an octave lower. The heckelphone was invented in 1904 by a manufacturer of woodwind instruments in Germany called Wilhelm Heckel.

43. Ornithology-related : AVIAN
“Avis” is the Latin word for a bird.

45. “Out of ___” : AFRICA
“Out of Africa” is a Sydney Pollack film released in 1985, starring Robert Redford and Meryl Streep. The storyline is based on the autobiographical book of the same name by Karen Blixen (written under the pen name Isak Dinesen).

47. Rock group Los ___ : LOBOS
Los Lobos are an American Chicano rock band, who released their first LP in 1978 and are still going strong today. The band’s name “Los Lobos” translates from Spanish as “The Wolves”.

54. Choose the best of : CULL
To cull is to pick out the best, to get rid of the rejects.

55. Critic James : AGEE
James Agee was a noted American film critic and screenwriter. Agee wrote an autobiographical novel “A Death in the Family” that won him his Pulitzer in 1958, albeit posthumously. He was also one of the screenwriters for the 1951 classic movie “The African Queen”.