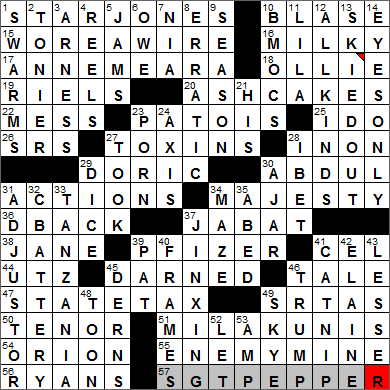 Today’s Wiki-est, Amazonian Googlies
Across
1. Onetime co-host of “The View” : STAR JONES
Star Jones is a lawyer and television journalist who spent almost a decade as co-host of the talk show “The View”.

16. Like opals : MILKY
An opal is often described as having a milky iridescence, known as “opalescence”.

17. “Archie Bunker’s Place” actress : ANNE MEARA
Anne Meara has been married to fellow comedic actor Jerry Stiller since 1954. Anne and Jerry are the parents of actors Ben and Amy Stiller. Meara co-starred with Carroll O’Connor and Martin Balsam in the eighties sitcom “Archie Bunker’s Place”, a spinoff from “All in the Family”.

19. Cash in Cambodia : RIELS
The Cambodian riel was first introduced in 1953, and was taken out of circulation by the Khmer Rouge in 1975 when they completely abolished money on taking control of the country. After the Vietnamese invasion of 1978, money was reintroduced and the Cambodian people are still using the “second” riel.

20. Some cornbreads : ASH CAKES
There is a southern dish called “ash cake”, which is corn bread wrapped in cabbage leaves and baked in hot ashes.

22. Base fare : MESS
“Mess” first came into English about 1300 and described the list of food needed for a meal, from the Old French word “mes” meaning a portion of food or a course at a meal. This usage in English evolved into “mess” meaning a jumbled mass of anything from the concept of “mixed food”. At the same time, the original usage in the sense of a food for a meal surfaced again in the military in the 1500s when a “mess” was a communal eating place.

23. Creole, e.g. : PATOIS
“Patois” is a word that we imported from French, in which language it also means “native or local speech”.

26. AARP focus: Abbr. : SRS
AARP is now the official name for the interest group that used to be called the American Association of Retired Persons. The name change reflects the current focus of the group on all Americans aged 50 or over, as opposed to just people who have retired.

29. Kind of column : DORIC
The Doric was one of the three classical orders of architecture, the others being the Ionic and the Corinthian.

30. “Forever Your Girl” singer, 1989 : ABDUL
Paula Abdul is primarily a singer and dancer, and someone who endeared herself even more to the American public in recent years as a judge on “American Idol”. She had a famous husband for a couple of years, as she was married to actor Emilio Estevez from 1992-94.

36. Arizona player, for short : D-BACK
The Arizona Diamondbacks joined Major League Baseball’s National League in 1998. By winning the World Series in 2001, the Diamondbacks became the fastest expansion team to do so in Major League history.

39. Viagra maker : PFIZER
Viagra is the most well-known brand name of sildenafil citrate, a drug primarily used to treat erectile dysfunction. Believe it or not, researchers have determined that 1 mg of Viagra added to the water in a vase makes cut flowers stand up straight for a week longer than with just pure water …

41. Kind of animation : CEL
In the world of animation, a cel is a transparent sheet on which objects and characters are drawn. In the first half of the 20th century the sheet was actually made of celluloid, giving the “cel” its name.

44. Potato chip brand : UTZ
Utz is the largest, privately held, producer of snack foods in the US. The company was founded in 1921 and is based in Hanover, Pennsylvania.

50. Purport : TENOR
The purport or tenor of something is its general sense.

51. “The Book of Eli” actress : MILA KUNIS
Mila Kunis is a Ukrainian-born, American actress, who plays Jackie Burkhart on “That ’70s Show”. Fans of the cartoon series “Family Guy” might recognize her voicing the Meg Griffin character. Somehow, I’ve yet to see the movie “Black Swan”. In”Black Swan”, Kunis plays a rival ballet dancer to the character played by Natalie Portman. In her personal life, Kunis dated Macaulay Culkin for 8 years.

55. 1985 Dennis Quaid sci-fi film : ENEMY MINE
Actor Dennis Quaid is the younger brother of fellow actor Randy Quaid. Dennis dropped out of college when he saw how successful his brother was and moved to LA to pursue his own career in acting. He has had some noted performances, including a portrayal of Jerry Lee Lewis in 1989’s “Great Balls of Fire”. And, Dennis is one of Hollywood’s best golfers, playing off scratch.

“Enemy Mine” is a sci-fi film released in 1985 starring Dennis Quaid and Louis Gossett, Jr. The film was a bit of a disaster all round. The first director was fired, there were major cost overruns, the box office take was lower than expected and the critics gave mixed reviews.

57. “Band” leader of the 1960s : SGT PEPPER
Sgt. Pepper’s Lonely Heart Club Band was the alter-ego of the Beatles and was the title of a famous studio album released in 1967.

Down
2. More stylish : TONIER
Something described as “tony” is elegant or exclusive. “Tony” is derived from the word “tone”.

3. Marshal Dillon portrayer : ARNESS
James Arness played the role of Matt Dillon, Marshal of Dodge City, on “Gunsmoke” for twenty years. If you count the occasions when he reprised the role for specials, he actually performed as Matt Dillon over five decades. And, did you know that Peter Graves, the actor who played Jim Phelps on “Mission: Impossible”, his real name was Peter Arness? He and James were brothers.

11. Lee of silent films : LILA
Lila Lee was a popular actress in the days of silent movies. Lee’s most successful role was Carmen in 1922’s “Blood and Sand” opposite Rudolph Valentino.

24. 1940’s ___ Pact : AXIS
Before WWII, Hungary’s prime minister was lobbying for an alliance between Germany, Hungary and Italy and worked towards such a relationship that he called an “axis”. The main Axis powers during the war of course were Germany, Italy and Japan. However, also included in the relationship were Romania, Bulgaria and the aforementioned Hungary.

33. Land on the Indian Ocean : TANZANIA
When the countries of Zanzibar and Tanganyika merged in 1964, the resulting state was named the United Republic of Tanzania, with “Tanzania” being a portmanteau of “Zanzibar” and “Tanganyika”.

34. Feature on some place mats : MAZE
In some restaurants, kids might be given paper placemats with games printed on them for entertainment.

37. Cursing : JINXING
A jinx is a charm or a spell, and the word “jinx” comes from an older word “jyng” from the 17th-century. A “jyng” was another word for the wryneck, a type of bird much used in witchcraft.

39. Way to stand : PAT
To stand pat is to resist change. The term comes from the game of poker, in which one “stands pat” if one keeps one’s hand as is, not drawing any extra cards.

41. Mint family plant : CATNIP
About 50% of all cats are affected in some way by the plant catnip. There is a terpenoid in the oil of the plant called nepetalactone that the cat inhales and that can cause anything from drowsiness to anxiety.

42. Lady of Arthurian legend : ELAINE
There are several characters with the name “Elaine” in Arthurian legend. The best-known is probably Elaine of Astolat, the Lady of Shalott.

45. Hollywood father and daughter : DERNS
The actress Laura Dern is the daughter of the actors Bruce Dern and Diane Ladd. Among her many notable roles, Dern played the Florida Secretary of State Katherine Harris in the 2008 movie “Recount”, and Dr. Ellie Sattler in the 1993 blockbuster “Jurassic Park”.

Bruce Dern is a Hollywood actor with quite a pedigree. Dern is the grandchild of former Utah governor and Secretary of War, George Henry Dern. Bruce’s godparents were Adlai Stevenson and Eleanor Roosevelt!

48. Bugs, e.g. : TOON
The word “cartoon” was originally used for a “drawing on strong paper”, a durable drawing used as a model for another work. The term comes from the French word “carton” meaning “heavy paper, pasteboard”. Cartoons have been around a long time, with some of the most famous having being drawn by Leonardo da Vinci.

49. ___ terrier : SKYE
The Skye terrier is a breed of dog that is actually under threat of extinction. A few years ago there were only 30 Skye terriers born in the breed’s native land of the UK.

53. Electrical unit : AMP
The unit of electric current is the ampere, abbreviated correctly to “A” rather than “amp”. It is named after French physicist André-Marie Ampère, one of the main scientists responsible for the discovery of electromagnetism.